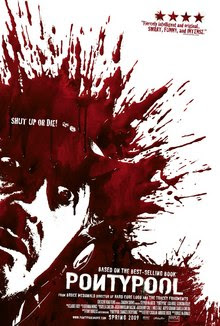 I really love it when I find a movie like this on Netflix: a fascinating, weird, disturbing and utterly captivating movie of the most unusual kind. Pontypool does all of this on what is clearly a modest budget, relying on the strength of its actors (chiefly Stephen McHattie and Lisa Houle) to carry the tension, plot, pacing...all of it, and masterfully.

Pontypool is a small town somewhere in Canada, presumably not too terribly far from (or inside of) Quebec. It's recently acquired a new radio host DJ, Mr. Grant Mazzy, who's an old fashioned baritone smooth-talker, with an interest in spicing up the town's otherwise dreary local radio. He arrives on day one, ready to go, despite a disturbing encounter with an odd woman in the middle of the night who runs up to his car, acting very odd before disappearing in the night.

Working with Sydney Briar and her new assistant, former Iraq-vet Laurel-Anne, Grant finds out quickly that his style of radio might be a bit excessive for the small town needs of Pontypool, when things start to get weird. A report of some sort of incident by ice fishers, followed by rumors of a riot near Dr. Mendez's office of psychiatry escalate rapidly to report of random mob violence by people acting violent and nonsensical. As the stories pour in, and "traffic reporter" Keny Loney calls in descriptions of a town that seems to be going mad, as people move like herds, mouthing nonsense words and assaulting everyone they encounter. His reports get increasingly strange and charnel, forcing Grant and Sydney realize that something has gone horribly wrong in the town, and they may be the only ones who can get the word out.

Pontypool offers up some great twists, but it does so with a minimum of fuss. The tale is told specifically from the perspective of Grant and his two assistants, trapped in the radio building, with no contact with the outside world other than what is coming in by phone or wire. As the story progresses (and I'll offer only minor spoilers here) things degenerate...badly....and late in the game a desperate Dr. Mendez arrives to shed some light on the horror that has befallen the town of Pontypool.

This movie manages to capture a strong sense of suspense, the weird, a dab of the surreal, a splash of gore and even a bit of the "z" word without necessarily being about zombies. It does this with a claustrophobic focus on the radio station and manages to convey some impressive sense of horror with minimal need for actual gore and shock....and yet it is most definitely in the same boat, ultimately, as so many other end-of-the-world (or close to it) movies out there.

Great stuff! If you have Netflix, this is a must-see in my book. Even my wife liked it! 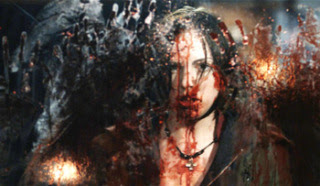