This is still bugging me. It might help if some sort of explanation was forthcoming in the Alien-verse (Prometheus-verse?) but I think the rationale may change from one film to the next, or dictated purely by the whim of the FX artist or video game art/design lead. So I present a collage of alien heads over time, as they have mutated from one movie to the next:

The alien as he looked in the original movie...also the "stalker" type in A:CM

The alien look from Aliens, Alien 3 and the warrior type in A:CM 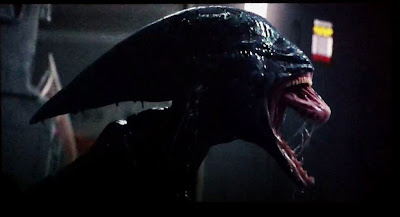 The Protoalien of Prometheus. I loved Prometheus, but after months of reflecting on the movie I have to say, I really wish that they get a good screenwriter for the next script, one who likes a challenge in creating a bridge movie that explains WTF was going on in Prometheus and how it all leads directly to Alien.

I mean.....is this alien what comes out of an engineer, or is just a literal protoype, a stepping stone for the genetic virus toward the final master race model?

So many unanswered questions that are floating around, but not, I suspect, because of any master storyline, instead because they were making it all up as they went along. I really wish they'd sprung for a novelization. Never did a movie need a movie-tie-in novel so badly as Prometheus. 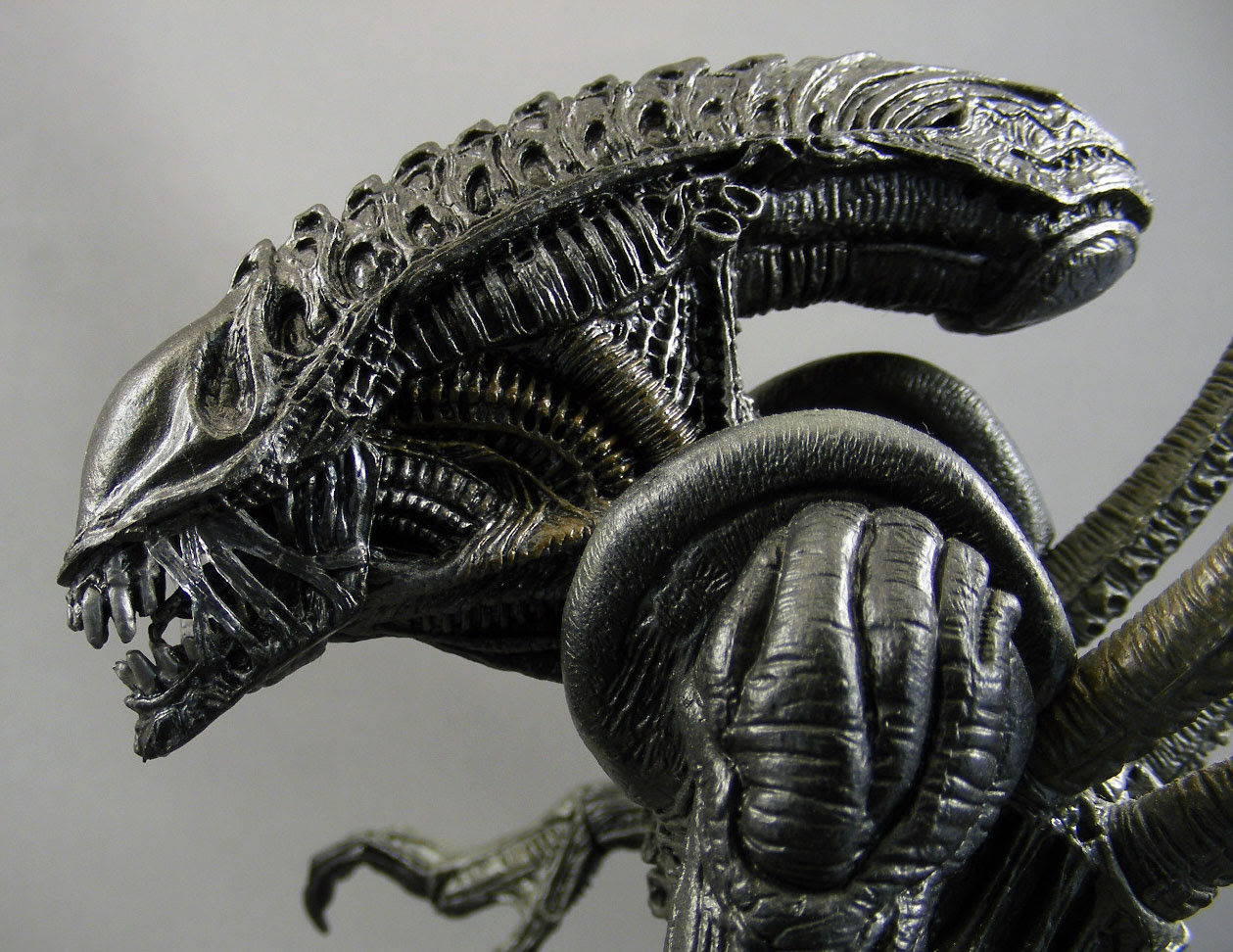 AvP: Requiem alien warrior. Note that his bony skull is not quite as pronounced as the earlier pic (two up). But it's all good as the AvP aliens are from an alternate reality, the one which contains the mustache twirling Spock.

The dog alien of Alien 3. Not entirely sure what made this one unique other than that was "born" more physically developed than other aliens usually are.

The painfully stupid human-alien hybrid of Alien: Resurrection. If we assume it's a product of the alien gene-stealing element and not a product of the insane and incompetent mad scientists that also cloned Ripley, then it ruins my theory (below) that the aliens might steal the most useful genes in host organisms.

The equally stupid albeit slightly scarier Predalien. Noteworthy for bypassing the egg-face hugger-hatchling snake process, going right to a new "vomit up alien embryos right into the host" process instead. This is the only instance we see of aliens hatching more than one progeny from a single host, which is another curiosity of the species....you'd think they would be capable of generating multiple hatchlings from a single face-hugger implantation. My theory is they are, but not in humans (not enough room or "resources" in the host to sustain more than one baby alien at a time).

If the predalien supports the gene-stealing theory, then it does in fact make one wonder what sort of reproductive processes predators are supposed to have.

The Alien Queen in Aliens. Pretty spry for her time. Still, I never did understand the xenomorph development stage very well. I mean it's easy enough to explain: think army ants who need to capture other bugs that they then expose to hatching larvae, and those larvae sink into the hosts to plant a second larvae, which then hatches. Sure, I get that....but only one larvae per host? That's a population that is limited in expansion by the number of other species around it. Very bad survival trait, if you don't mind my saying so.

The Alien Queen in AvP. A terrifying tyrannosaurus Rex in the guise of an alien. Apparently not able to survive the crushing depths of the ocean, even if she is more than capable of escaping orbit. She was, however, able to survive for untold millennia in Predator cryostasis, apparently. Speaking of which, the Alien vs. Predator films don't even fit in well with the canon Predator universe. Keeping aliens for some rite-of-passage event on Earth is directly comparable to a big game hunter who keeps a private kennel full of lethal asps inside a petting zoo.


There seems to be a suggested theme in the movies that the aliens steal DNA or adopt characteristics of their host species. This is never elaborated on (no scientist type seems to step up and mention this) but is rather simply assumed*. It's a good example of artistic expression trumping a good story, I feel. Now, taking into account the reveal in Prometheus (that the aliens may be a genetic third or fourth generation byproduct of a hyper-mutating genetic virus of some sort) it does raise interesting questions, such as "if they can adopt species characteristics that are useful, then why don't they borrow...say....bigger brains for more intelligence, or better adaptive/reasoning skills?" For that matter, why don't the aliens simply adopt a better reproductive system?

I suppose the answer will be revealed in a future Prometheus sequel, but I would imagine the real answer is: they are actually stuck with a limited range of adaptive traits. Specifically, they are bred for war and genocidal extermination, and the engineers created the virus to breed monsters of a destructive nature, so the virus seeks out traits that are calculated to be the most damaging to a target species. Maybe? It's all speculation at this point. A byproduct, in truth, of nearly forty years' worth of different film makers and script writers dipping their hand in the pot.

*Except, of course, in Alien: Resurrection where it's sort of the whole impetus of the movie, to the point where they are cloning Ripley from some ill-defined source of her DNA (attained magically) to extract alien DNA from her clones. Oh that movie makes my head hurt. I think the novels imply as much, too....but for the most part 95% of the Alien tie-in novels have been little more than poorly-conceived paid fanfic. Um, IMO. There are some exceptions, though.
Posted by Doctor Futurity at 12:55 AM