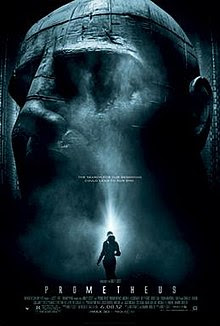 Caught the midnight show...I opted for a straight digital affair, eschewing the 3D glasses. Having seen Avengers both with and without 3D, I felt that the 3D looks a bit too unreal...anyone else experience it like I seem to, in which the 3D seems to mess with the "field of vision" too much, creating a sense that everything is sort of unreal and toylike? Well, while the 3D effect is certainly interesting, I was going to have none of that to distract me with Prometheus.


There's no way to talk about Prometheus easily without spoilers, so I am going to proclaim that this movie is certainly worth seeing and is the best entry in the franchise since Aliens.

Now to announce this:

There, you have been warned. Okay, my observations about Prometheus. Also, a lot of questions. Lots and lots. This film is all about answering questions we've had since 1979 with a hundred more questions.

2. I'm trying to figure out if the prometheans (alias the jockeys, pilots, or engineers in the movie) at the start were seeding earth in some incredibly ancient period, or if the film was implying that everything we know about paleontology is completely wrong. They glossed over the archeological observations so briefly that they didn't really raise any odd questions there (one can just assume that the prometheans were visiting earth until quite recently) but I couldn't really determine if they were implying that the seeding of life on Earth was a relatively recent phenomenon or not. I am leaning toward, "this happened sometime at the dawn of life's manifestation," or possibly that the seeding (and maybe even later re-seedings) tie into the five major extinction events in our geologic history....but then, these are the sort of unanswered and possibly unanswerable questions the film likes to raise. If you assume that the prometheans made life hundreds of millions of years ago, that makes them a positively ancient species, and it suggests that the modern militant prometheans who have weaponized life are a new phenomenon...or maybe not....the significance of the opening scene, with a pure, unaltered promethean giving himself over to the elixir of creation to seed Earth with his sacrifice is fairly significant, and implies a very ancient, godlike civilization with some rather unique rituals and processes. Plus, the ship in that opening scene was decidedly not like the later u-shaped warships found on LV223 (and later on LV426 in Alien).

3. If the human DNA is identical to jockey/promethean DNA, or close enough to call it a day, then that implies that the ultimate goal of the seeding of Earth was to end up with humans. This suggests that DNA is more programmable and far-reaching over time, I imagine. Which means, probably, that all the junk DNA in our strands could also include "alien directional programming" placed there by the prometheans/engineers (the seed of life goo we see a lot of in this film). Either that, or there's something even weirder going on. Maybe the substance of life mimics/extracts a path for life from its host, thus the reason the engineers sacrificed someone, to "seed" the path?

3. Is LV426 in the same system as LV223? Are they both moons of the ringed world? It is not at all clear that there's any relation to the two other than similar cataloging convention, best as I can tell. LV426 could be in an entirely different solar system. I'll be catching this movie again, see if I can spot any evidence that it implies this is the same plantary system for both moons. Come to think of it, I don't recall it ever being established that LV 426 was described as a moon in the past. Time to rewatch the series.

4. The "thing" at the end (okay, the alien-like fellow, if you're reading this without having seen the film, shame on you). Not quite an alien as we know it, but awfully similar. Implying, I guess, that the "substance of life" (the weaponized bioweapons the prometheans were stockpiling) creates all sorts of weird stuff, but when it works with prometheans as a host it comes out sorta Giger-like alien looking? The mural in the "tomb" as the one scientist describes it has an alienesque image....which leads one to wonder, had the prometheans realized that all life they have seeded eventually becomes like them and creates new life, which in turn leads to this one final, destructive form? Am I reading too much into it? Is this why the promethean doesn't like the android? Is the substance of life, the weaponized biostuff somehow programmed to create the ultimate destructive lifeform, and it sort of gavitates toward the alien-physiology? Is it that all these lifeforms we see are related to an alien ecology that the prometheans have extracted the weaponized biostuff from? Too many damned questions!

5. I appreciated that the android was unabashedly amoral and determined with no effort to cover it up. We all knew he would be, and it was nice that the film didn't beat around the bush about it.

6. Why did the head explode and what was up with that anyway?

7. What did the android hope to accomplish by contaminating David's drink? Was he hoping the doctor would have sex with Shaw, and that that led to the impregnating alien? What made him think that would even work? Was he able to analyze the bioweapon stuff and see it for what it was? Did he think it would lead to the birth of a promethean, or was he just screwing with them? Why was he so nonplussed about her efforts to remove it? Why wasn't anyone all that concerned during that entire sequence? Was it really simply that the people of Weyland were that reverential to their geriatric boss? Why was Wyland played by a younger man in an old man's mask? Why not just get a old man to play the role? Why the hell would a high-tech auto surgical machine that was inside the special self-contained compartment of the Charlize Theron's hidey hole not be programmed for surgical procedures on women?

8. Obviously many more films can be made now about revisiting LV223, unless there's some suggestion that Weyland hid his actions and destination from everyoneback on Earth....but that still leaves the fact that the two archeologists uncovered and published (did they? I would postulate they did) data on the astronomical observations of countless unrelated cultures over a wide period of time.

9. Is Blade Runner part of this universe? I would suggest that there is absolutely nothing at this point that excludes Blade Runner from the Prometheus/Alien universe, and that it kinds fits well, barring that 2013 date everything takes place in.

10. So I wonder what did actually kill the prometheans in the base? The bodies suggest a lot of crazy stuff going on, experiments out of control, all that. Did the head explode because it was contaminated with the biomatter, or the bioweapon was mutating it, but not in the self-sacrificing way we saw at the opening scene? No one dies of a chest-bursting event until the very end, barring the fact that Shaw sort of had an event, but it was a more transormational stage. The proto-alien that pops out of the promethean could bust through the promethean's transhuman exoskeleton, pretty tough cookie.

11. Hmmm, I just realized that if the prometheans are visiting Earth over many thousands of years, and they are telling primitive humans about the star cluster in question that is where LV223 is, then they were technically laying a trap for humanity. That, or they thought originally that they were offering them a positional location, for when humanity advanced to the stars, to come meet them. But how does that jive with the Captain's very astute observation that LV223 felt like a munitions stockpile for biowarfare weapons, and the subsequent revelation that it was clearly designed to dispatch ships to inhabited worlds to seed them with the bioweapon? Does this mean its something of a trick? Are the prometheans really creating worlds to destroy, or destroying and remaking their creations if they are dissatisfied with the results? Are they in a period of cultural decline, or have they had a social revolution where the old creator culture was wiped out and the militants remain, snuffing out the countless seeded worlds as they find them? Does this explain why by the time of Alien the idea of inhabited worlds that don't need terraforming is a rare proposition? Too. Damned. Many. Questions!!!!

12. One gripe; wish we'd seen a bit more at the end of Shaw and the Head figuring out how to pilot the ship before taking off, just for fun.

Okay, I'm exhausted from asking questions that this movie offers no answers for. I do like that it was willing to lay out so many conundrums and leave no resolution to them, though.* That was definitely in keeping with the spirit of the original Alien. Those who have dismissed this film for its inability to tie everything up in a neat bow are rather missing the point of this kind of movie. A tight film gives you closure. An expansive film leaves the door wife open. Prometheus kicks the door down and burns it. 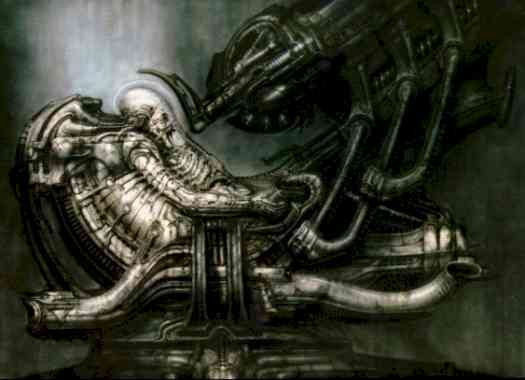 *Except for the dumb questions, like why the android spiked David's drink, or the deluxe surgical machine wasn't programmed to operate on women. WTF.

Posted by Doctor Futurity at 3:22 AM