Kasdalan: The Slaughter of the MInotaurs and other Plots

The Slaughter of the Minotaurs


Six years ago Mardieur Mardieux roamed the swamps and forests of Kasdalan, warring with the Dark Queen. Lady Poe sought to gain control of the avatar before he knew his own worth, but in his rage the minotaur lashed out, slaying seven of her thirteen living daughters. It was a harsh blow to the queen, who had bred each of her children to be merciless and efficient necromancers, assassins and warriors in her service. She never forgave Mardieur Mardieux, but unable to lash out at the avatar who disappeared four years ago in the West, she has instead resorted to gaining cruel satisfaction out of capturing and slaying all minotaurs she can find.

Pallaeus and the Lakemen of Piridion both have regions with several populations of minotaur tribes. Lady Poe has sent forth several forces aimed at finding these tribes and slaughtering them or capturing as many as possible, for transport to the arenas of Mordren, or for experimentation in the City of Skulls. This has led to cause for alarm in both neighboring nations, as some minotaurs have united together to protect one another, and perhaps even to strike out against her. The minotaur chieftain Muurn Hadronias has united five of the greatest tribes in the region in to a powerful retaliatory force, and they intend to wage war against the Kasdalani forces until the revenge attacks stop. 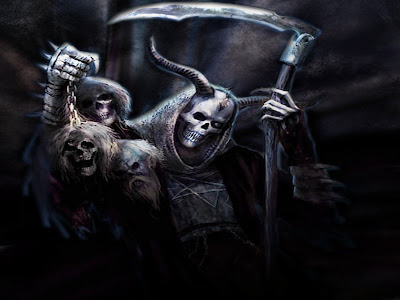 
Throughout the vast and dark Krylliathe Woods which encompass most of Kasdalan, darkness has consumed vast swathes of the wilderness. For reasons as yet not entirely understood, something is seeping in to the mortal plane from the spirit realm of the Shadow, and it is gaining a permanent foothold, it would seem, in the vast expanses of this largely untamed woodland. Lady Poe and her agents are aware of this manifestation, and indeed they have always known that there is a deep connection with the Krylliathe Woods and the Shadow Plane, but never before have permanent portals between this realm and the shadow plane been made permanently manifest, nor have the strange entities which have come forth from this darkness been so antagonistic, or even stayed permanently in the mortal realm. The concern is that there is a new agency, something which is so powerful that it is reaching out to consume the mortal realm from its shadow domain, and Lady Poe is deeply concerned about its intent.

While the threat is initially a worrisome curiosity, she will dispatch agents to investigate the stories of portals to shadow opening in the remote vastness of the woods. Adventurers in her service are quick to learn that indeed strange and deadly beasts are manifesting in the shadow, and indeed stories suggest that Kasdalan is not the only realm to be so affected.

In time, it will become clear that the source is a single being, one of uncertain origin or allegiance, called Molabal. Little else is known (at least in Kasdalan) as to Molabal’s true nature, but rumors that undying cults to this enigmatic self-proclaimed deity in the ancient City of Shadows can tell of its intent, and its weakness, even…of course, Molabal has been freed far to the west in Pelegar, though his freedom is dependent on the imprisonment of the avatar Mardieur Mardieux….

Next: Agents and Agencies of Kasdalan