2221 - After the Nemesis Cataclysm: A BRP Post-Apocalypse Sci Fi Setting

This campaign actually played out in its first form using GURPS 4th edition, but I subsequently revised it for use with BRP, which was an easier set of mechanics to introduce players to. Either way, it may offer some inspirational ideas for your own future Apocalypse Campaigns! 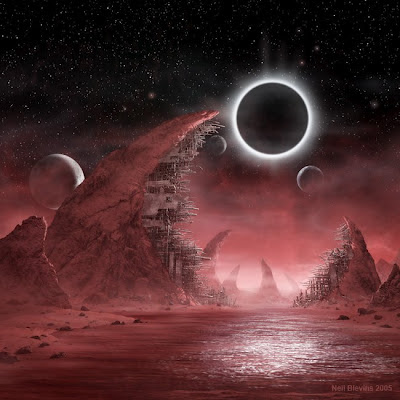 2221 – After the Nemesis Cataclysm


The End of Earth: The Earther’s View

The end of the world happened about 100 years ago, although almost no pocket of civilization left keeps records anymore, so there is some debate about exactly when it happened. Best guesses from the organization called the Recorders is that it began sometime in 2121. This is the first time that records from the Old World speak of the entity known today as Nemesis.

Not much is known about Nemesis in the present, although it is thought to have been a great and terrible being from the sky, which passed near the world of man and wreaked terrible destruction upon the vast civilization of humanity. To the men of the current era it is seen as a quasi-mystical event, a grand cleansing that unraveled the civilization of old, from which a handful of worthy souls rose anew. The name, Nemesis, has come to hold terrifying connotations of reverence, awe, and fear. It is, to many, a terrifying god of darkness.

Not much else is known of this time, though the small handful of scholars called the recorders do seek to remember or salvage what little they can of the lost lore. It is known that Nemesis was heralded by several archons of the sky, which descended to wreak terrible destruction upon the world, in honor of their dark master. Wherever you see vast craters and scars upon the earth, you are looking at the tread marks of these archons. The cradle of the West, near the free city of Fenx, owes much of its life to the vast footfall of the archons, which itself filled with life-bringing water.

The most devastating effect of the great cataclysm was the arrival of the so-called Progenitor. Very little is known about what the Progenitor was, but it is known that the mysterious object was nick-named Thanatos by the ancients, who appear not to have understood what it was.

It was only after the great footfalls of the archons and the searing heat of the skies cast by Nemesis that the Progenitor came to Earth, and began to seed. Thousands upon thousands of what could only be described as pods, many of which are still plainly visible across the wilderlands, crashed to earth and exploded open, spewing forth mysterious gasses, spores they were called, which implanted themselves in everything, be it the soil or living creatures, and began to grow. Men and animals who inhaled the spores went mad, become ravenous beings driven to hunger and violence. From the soil, new plant life grew, strange and terrible life that was much more dangerous than normal plants. Soon, the first animals of the Progenitor appeared; some simple creatures, other terrifying giant therapods with six eyes, four jaw-like tentacles, two legs and long, prehensile tails. These creatures were immediately hostile to man and animal alike. Survival during this early period was harsh.

Over the years, it has been a long struggle for man and his devastated environment, working to survive against the new life brought by Thanatos, a form of life which survives by virtue of the devastation caused by Nemesis and the Archons. There are pockets of humanity which survive, and some claim that there are men in the sky who still survive, waiting for the day when they will come down to bring humanity’s surviving descendants to the mysterious safety of the starry heavens. 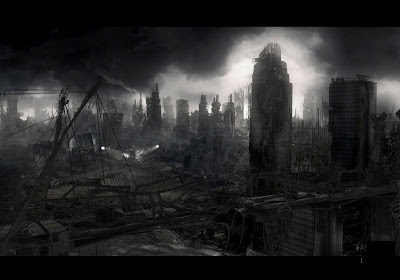 The End of Earth: The Solar Colonial View

The world came to an end in a few short months. It began when the ISA Deep Space Array, a manned research and scientific outpost near Pluto in the vicinity of the Kuiper Belt detected a rapid approaching object that radiated a low level of heat but appeared to be immense in size. The object was dubbed Nemesis, after recollections of the very old but discarded hypothesis of the Nemesis star, once used to suggest that a large stellar object traversing the solar system might have gravitationally dislodged asteroids and comets, sending them hurling in to the solar system to lead to the extinction of the dinosaurs. Here, whether it was a fluke or not, was a massive object, a brown dwarf, which was about to pass dangerously close to both the Sun and the planets of the solar system.

Nemesis took a trajectory through the solar system which brought it alarmingly close to Earth. Space colonies had been established on Titan and several other Jovian moons, as well as extensive colonies on Mars, the Moon, and even research stations over Venus and Mercury. While most of the colonies were relatively safe, it became painfully evident that Earth would suffer a catastrophic near-miss.

As Nemesis came closer, it became evident that the situation was worse than could be imagined, for the heavy gravitational pull of the brown dwarf was dragging a large mass of asteroids and planetoids with it. Worse yet, it was dislodging cometary debris from the Kuiper Belt and beyond. Over a matter of weeks, thousands of planet-killer sized objects were detected heading inward toward the solar system, creating a devastating barrage of objects, any one of which hitting Earth could lead to catastrophe. The largest of these objects appears to be in a tidally-locked orbital pattern around Nemesis, and was labeled Thanatos.

Humanity’s preparations for the end of time included an effort to export as many carefully selected people as possible to the Solar Collective, as the colonies came to be called. Efforts at deterring planet-killer size objects were undertaken, but with limited success, for there was no amount of time and effort that could possibly deflect the number of incoming objects toward Earth.

After four months, the first of a series of asteroids and cometary debris struck Earth and the moon, followed by more than a dozen more strikes. The largest single impact object was a mile in diameter, but that was more than enough. Eleven successive strikes took almost the entire ecosystem, let alone the civilizations of man, out in a matter of hours. Only a few well-placed or lucky installations and cities survived for any length of time, and even then the wave of regression, followed by the nuclear winter and the devastation on both climate and food resources left 99.9% of all humanity dead.

The Solar Colonies watched in horror, unable to do much more than plan for future efforts to return and re-colonize their home world. That was when the Thanatos Object appeared to launch thousands of objects, like seed pods, at Earth and Mars, pelting both planets with a rain of steady asteroids for a period of weeks. On Mars it was immediately evident that the seed pods contained strange life, which seemed to have been genetically tailored to the unique environment and slight atmosphere of Mars. Because of Mars’s slight atmosphere, however, the vast majority of life spawned from the pods was microbial, with a handful of larger creatures that appeared to be remarkably efficient at converting and producing a meaningful atmosphere. It instantly transformed what was a millennial terraforming project initiated by humans for the last six decades in to an event that would take only a century or two.

It wasn’t until a year later that spacecraft observing Earth revealed that the objects on Earth were also seed pods, which had seeded the earth with the spores, bacteria, eggs and seeds of an entire alien ecosystem. Unlike on Mars, it appeared that the pods on Earth had less work to do, and so began to hatch all sorts of beasts, both foul and friendly. The severely weakened ecosystem of Earth was being attacked by alien invaders. Amazingly, it appeared that in the wake of Nemesis, an effort at alien colonization was underway.

Within three years, a project was launched by the Mars colony to pursue Nemesis and investigate all they could learn about the Thanatos object. It was evident now that what was previously believed to be a close orbital body to Nemesis was, in fact, a slower-than-light colony world, using Nemesis as a means of transportation and expansion. It would be decades before the project returned, using the fusion-powered Starbringer spacecraft, with firm evidence that Thanatos was a relic, ancient, controlled by an unknown artificial intelligence, seeding any potential world that Nemesis passed by. The object itself was some sort of immense processor and seeder, managed by curious self-replicating biomechanical robots reminiscent of Von Neumann machines.

Of all the alien creatures observed to date on both Mars and Earth, no evidence of true intelligence has manifested. This has led to a great deal of speculation about the real purpose of Thanatos, and where its intelligent creators have gone. Speculation ranges from suspicion that the artifact is a relic, long abandoned but still functional, to the fear that sister objects containing STL world ships of the intelligence behind this impressive terra-forming project may be on the way. For now, it remains a mystery.

A century after the event, the Solar Collective is an organized and efficient society of humans, with a strong presence on Mars, where they have made great headway in genetic engineering while learning to control and manipulate the alien environment introduced by Thanatos. The Jovian moon colonies are strong, and new colonies on the Moon of Earth have been built to replace those wiped out in the cataclysm. Recently, direct evidence from observatories on the Moon has shown that mankind survived the great extinction, and now holds its own in small colonies throughout the world.

The Collective is lead by the Colonial Director, a woman named Samaris Yingada, who has decided that the time is now ripe for the first tentative efforts at re-colonization must begin. Ten thousand men and women have volunteered. The Lunar Base has become the staging point for the re-colonization, and a brave new era of exploration and rediscovery is almost underway.

Next: Character Generation
Posted by Doctor Futurity at 6:00 AM