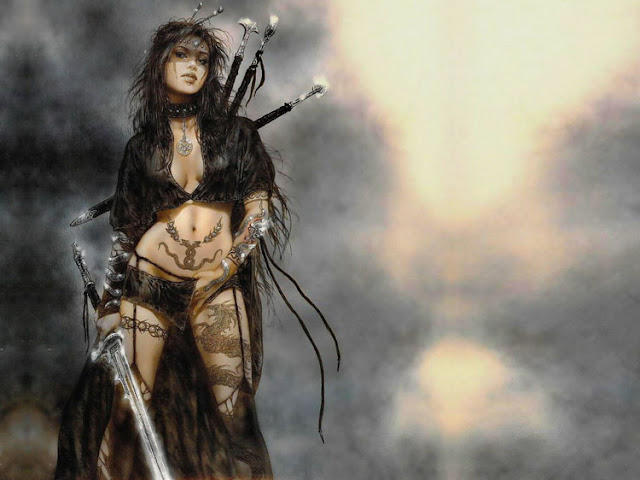 Orders, Cults and Secret Societies of the Sabiri


The Sabiri are like any other civilization, and must have their special secret societies and closed groups. Unlike many other lands, the sabiri have some unusual influences to this effect, including the revived demon cults of the Kadelans, the religious cults of the enigmatic Kobal and Amorgas (which are worshipped solely in this region) and the many unusual martial orders that cater to unique characteristics of the local culture and its unusual gender divisions. Each of the key groups and their influence in the land shall be addressed below.

The hnaka (hih-naka, which means horse slayers) are small sects of warrior women scattered throughout the many tribes of Sabiri. The hnaka rite of passage is a special ritual that women who chose to eschew their traditional roles may attempt to pass. The ritual is a grueling quest to prove one’s worth as a true warrior, and is meant to frighten away would-be initiates who haven’t the strength or fortitude necessary to survive in the demanding roles of a hardened warrior cult.

Hnaka who pass the test are indoctrinated in to a curious new society, one in which they are expected to dress and act like a man, and to even adopt male roles of sexual dominance. In the southlands a few extremist tribes near the border to Helios are known to undergo rites of genital mutilation. A handful of hnaka refrain from all sexual relations and choose a path of celibacy.

Tribes which have a sect of hnaka amongst their number treat the women of this group as if they were men in almost all other ways save for ownership of horses (indeed they are forbidden from ownership of horses). The men in turn treat them in kind, and grant them all of the rights and status of male warriors. This means, in theory, that hnaka can even take husbands—or wives—as if they were men. A hnaka who chooses men as husbands in this manner does have some restrictions: the men must be foreigners, slaves, or captured in battle from enemy tribes. It is extremely rare for a hnaka to take on a voluntary warrior mate of a friendly tribe voluntarily, for it still means a loss of status for the man.

Hnaka in battle show the uncharacteristic unity of their kind. If a dozen tribes gather on the fields of battle to face off against another dozen, the hnaka sects amongst each friendly tribe will gather together as one and work as a united company. No one questions this, and the hnaka usually choose one chieftain among the tribal leaders to answer directly to, though the exact process by which they make this decision is enigmatic. The hnaka do seem to have some sort of internal ranking system, but exactly how the pecking order is established is unknown.

Hnaka in battle are distinguished for being ground troops. As a unit the hnaka are infamous for their ruthless and deadly efficiency at dealing with mounted warriors on foot. Their ability to bring down both horse and rider is how they attained their name.

Effect: A small number of Hnaka warrior women believe that sexual energy depletes their warrior’s prowess. By restraining from sexual contact these women are perceived as achieving greater skill in battle.

A celibate Hnaka warrior woman who remains so gains a special property: she may expend a hero point as a swift action to gain one of two benefits (chosen when the point is spent): she may gain a bonus to all attack and damage rolls equal to her level for a number of rounds equal to her Chrisma modifier (minimum 1 round) until the end of the encounter or she may recover a depleted spell slot. Should she ever break her oath of celibacy, she loses this feat immediately and must replace it with a different feat.

Warrior women who were not virginal before taking this oath may subsequently take it and be eligibile for the feat, but they must also subject themselves to a process of ritual purification during which they prove their worth by abstaining from sexual congress for a year, first.

(Notes: First, one might be forgiven for thinking that I devised Sabiri female warrior cults with all their tattoos and leather specifically to have an excuse to use Royo's warrior women illustrations in my campaigns. Second, this is technically as far as I've gotten with "ready to release" content in the Sabiri line, but I hope to get more material done soon....maybe even by the time this edition of Tales rolls around (I've preprogrammed a bit of it so I have a couple weeks...)