2221 - After the Nemesis Cataclysm: Spacer Backgrounds 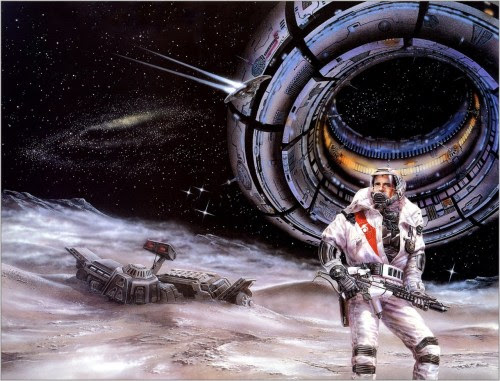 Citizens of the Solar Collective and other Spacers:


The Solar Collective is an advanced society with access to high tech resources, a necessity for them to have survived in the solar system for the last century. All Solar Collective characters start with access to most advanced technology, limited only by what resources they take with them to the surface of New Earth. Usually if they are arriving as part of an expedition funded by the Science and Research Institute of the Solar Collective, then they will receive plenty of gear for the task at hand.

Some characters may come from the Jovian Expanses or the Outliers. These are the regions where higher technology is blossoming, and access to even more advanced technology can be found. Characters could also have been involved in unusual research projects in the Mars Colony or off of the Venusian Projects.

Space Professions: Many professions are reflected in space, though the following are most common, including but not limited to assassin, computer tech, doctor, engineer, explorer, journalist, mechanic, pilot, scientist, soldier, spy, teacher, and technician.

Powers: Special agents of the collective may be outfitted with cybertech to aid them in surviving the extremely dangerous and often toxic wastelands of the world. A character may gain access to cybertech by making a LUCK roll and having a base wealth by profession of affluent or greater, or if the GM dictates it (such as their employer granting the surgical modifications necessary to complete a mission) Characters may build their cybertech using the Super Powers rules with a normal level of enhancement.

Equipment: When equipping characters, any Advanced Tech gear is readily available, although more conventional modern equipment may be chosen for its sturdiness or practicality. Some guidelines on weapons and armor will follow under the tech section. For practical purposes, assume your character has received equipment up to a value of Expensive as if the character had affluent wealth. from the Solar Collective to aid his venture on Earth.

Soldiers of the Collective

The colonial defense force is a small but well-trained military outfit. Although the Solar Collective foresees no conflict among their own, there are still plenty of rogue operators out there, not to mention the mystery of the Outliers in the outer system, and the reberllious Jovian Expanses. Such turmoil insures work for the CDF. Crack CDF elites are now being recruited to protect humanity’s return to Earth, as well.

The colonists are a great choice for average (although “average” for the Solar Collective is still a scientifically educated and capable adult) citizens eager to “clean up” the old planet. As the mobilization to recolonize and “rediscover” the homeworld picks up, Spacers will be given opportunities to buy new plots of land on Earth, to begin the process or reinhabiting and reintroducing civilization to the damaged world.

Researchers are chomping at the bit to begin new land-based expeditions to the old homeworld, after decades of limited ground contact and satellite surveillance. Many researchers are eager to unlock the mysteries of Thanatos and its terraforming project.

Educators are among those spacers eager to learn about the survivors and help lift them back up to new tech levels.

Some spacers are simply interested in charting out the mysteries of a world no longer familiar, one which is essentially new alien territory to men and women who have lived their entire lives in space and on desolate planets.

The astronauts and space pilots of space are unlikely to venture out on Earth for very long, but there may be some unfortunate incident forcing him to wander about for a prolonged period.