2221 - After the Nemesis Cataclysm: Flora and Fauna of New Earth 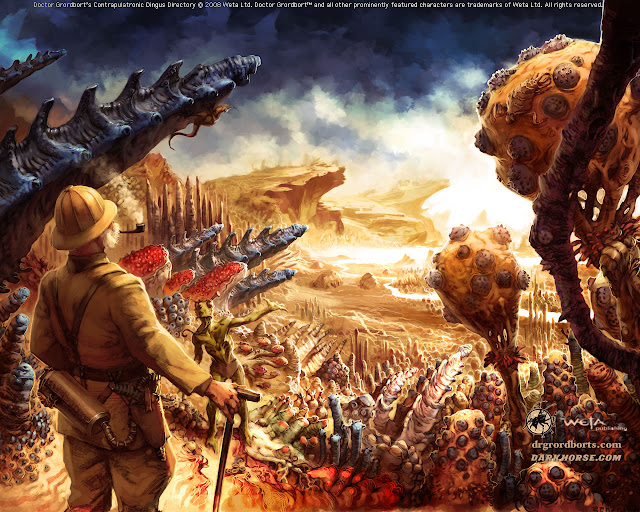 Flora and Fauna of New Earth:

Not all humans who succumb to the DNA altering gene viruses of the Seed Pods come out “normal” In the end. A large number of altered humans from what may have been an early experiment by the alien machines were turned for all practical purposes in to violent, nearly unkillable mutant zombies. There is a belief that the virus altered the biology of the affected humans such that their body achieved a sort of “collective independence” in function and neurology. Effectively, you could cut off a limb, even a head, of one of these beings and each piece kept on living.

The zombie hybrids are a major threat to most normal communities of humans. The transmit viral protein strands through their saliva, which can infect and alter prey, turning the new host in to another zombie. They seem to be immortal, living pretty much until killed and eaten, although some unusual indigenous and alien diseases can have strange effects on the altered morphology of the zombies.

Thrashers are vicious alien lifeforms introduced by the Progenitor. Thrashers look like grass, initially, except the blades of grass (average 3-5 feet in height) are part of a bristly network of appendages attached to a much larger form beneath. Thrashers are plant-like; they bloom, spreading seed pods, which are caught by other thrashers. A small percentage of thrashers live long enough to grow large and dangerous. The largest of the thrashers can be a terrible threat to everything around.

Thrashers can move, by flexing their large, flat body, rolling up in to a ball (tentacle/grass blades out) and roll and pull themselves to their destination. It’s remarkable and terrifying to see one in action all at once.

The terror jaws are another alien introduction, therapods reminiscent of dinosaurs, but with a four-hinged jaw structure that also has surprisingly fine manipulation skills, Terror Jaws appear in a variety of shapes and forms, with the smallest being no larger than dogs, and the largest dwarfing Old Earth skyscrapers. It is not at all clear to Solar Collective researchers how the largest of these beasts can even support their own weight, and efforts to perform a biopsy to discover something about the physical properties of the largest beings.

Terror Jaws are smart animals, and pack hunters. They tend to feed off of indigenous Terran prey, and are also fond of several alien herbivores that were introduced by the Seed Pods. They are not a theat as long as they are not hungry and do not sense danger, but if provoked they can be deadly in close combat.

This particularly terrifying creature is some sort of weird hybrid symbiont which seems to voraciously absorb victims in to its own mass, adding them to the collective consciousness of the alien host organism. Many skull collectors alter their human victims, lengthening their necks, so that their distorted heads, which have grown numerous odd sensory nodes. Thus, skull collectors appear to have a number of tentacle heads with skull-like, polyp-laden heads attached to the ends of the hideous limbs.

Skull collectors live on the DNA and integrated body mass of all other living Terran and alien animals They are highly territorial as well, and appear to reproduce asexually, quickly shedding their newborns and forcing them away less they be re-absorbed in to their mass again. It is this inherent territoriality that prevents skull collectors from a ceaseless advancement in growth and threat to local humans and animals.

Other Creatures in Brief:
Reavers

Strange an immense gathering beetles migrating from south to north

Rabble of all sorts who have degenerated to barbarism

Professional criminals who prey on the efforts of others

A name given to the victims of this black-creeping tar like substance which covers victims and takes control of their bodies, in order to spread itself to more hosts.

Giant beetle-like monstrosities that can be heard for miles using chemicals to detonate the ground in search of mineral veins which they absorb.

Strange ovoid balloon-like creatures which attack with numerous dangling tentacles. They live in the upper atmosphere, mostly, and are a flight hazard.

Monstrous wolf-like beasts with exoskeletons and a terrifying howl. They are fierce predators.

The mysterious sentient alien beings appearing near the Grand Canyon. They are four-armed and two legged, with long lean carpaced bodies, light blue skin, and wedged heads. They are tool users apparently, and it is uncertain where they have come from, but they are genetically distinct. May be new products of the Seed Pods.
Next: Plots and Locations
Posted by Doctor Futurity at 6:00 AM