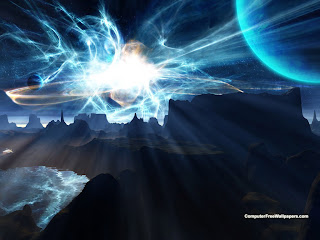 I have been away for a bit, thanks to a busy work schedule and the need to prepare for the imminent B-Day arrival of Marcus Torbin in early November (I'm guessing November 9th, the doctor thinks November 17th, and Jody's hoping for October 31st because...well...we could have a proper Witching Hour Baby!) but I have lots of stuff I want to post, so maybe I'll take some time to schedule some more posts this weekend.

Some interesting news has prompted me to get posting again. This article was posted over on Slash Dot, along with the accompanying link to the actual experiment here. The short version: after approximately 16,000 tests, the scientists broadcasting particles from the particle accelerator at CERN to Gran Sasso Labs in Italy approximately 732 km away have found that there is a 60 nanosecond discrepancy between the arrival of detected neutrinos and light broadcast at the same instant. The neutrinos have been consistently arriving ahead of the light, which is either suggesting an undiscovered anomaly with the test itself (that has not been accounted for or discovered in the course of the 16,000 tests) or...much, much bigger, the neutrinos are gaining marginally faster superluminal speeds. Reading about reactions and speculation to this is proving fascinating. If there really is something here, it could cause an unbelievable upheaval of the Standard Model. If there isn't, then it could be a valuable lesson in how proper science is vetted and analyzed (as by all accounts the researchers behind this test are being very careful not to make any extraordinary claims).

Worth noting in the course of sifting through all this information is that this phenomenon has been detected (albeit regarded as indicative of a flaw in the testing process) at Fermilabs before. This article talks about it here.

Finally, for fun, one of the links I found is from the Anderson Institute, talking about what superlimunal travel would mean in terms of our current understanding of physics. 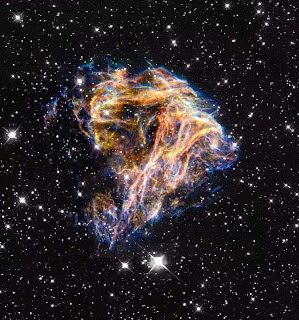 And now for something completely different!

Because I haven't provided you with enough cat pictures this year, I offer up Ayel Cat, our youngest feline in the house, and the most photogenic, sitting upon his Throne of Power: 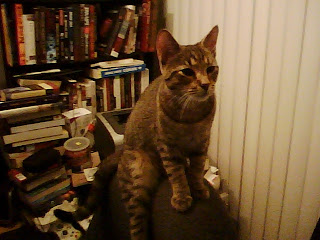 Posted by Doctor Futurity at 2:44 AM