Random image from Google, and I have no idea of the source. If it's from something like A Game of Thrones I apologize, having not yet been able to catch a single episode of that series (but I have read the books, yes indeed....)

Anyway, this is how a warrior woman wears decent armor into battle!

UPDATE: Thanks to Gareth Larter for identifying her as "Leelee Sobieski who plays Muriella in "In the Name of the King" http://www.imdb.com/title/tt0460780/"

I'll have to add that film to my watch list! 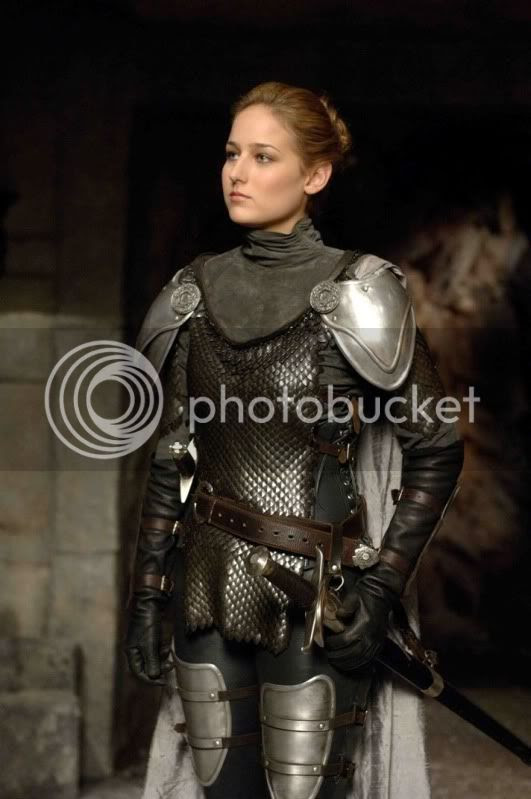 Just for fun, here's some theoretical stats for this woman as a vryloka blackguard in 4E:

Katartha is a devilish rogue, though her ancestry owes more to the ancient curse of the red witch. She revels in the profiteering she can engage in by working for the various factions of the devil city of Dramen and the sprawling, ruinous port of Kharabys in the Astral Sea Island of Isnathar, seeking to turn a profit and sew discord wherever she can. She has served the god Typhon for several years now, since she was bitten by a venomous serpent in the marketplace of Kharabys and mysteriously survived, though her feverish dreams left her with the sense she had been given a vision by the ancient primordial titan that she would one day aid in the freedom of the ancient titans, that they may rise up again in a vengeful new titanomachy.
Posted by Doctor Futurity at 12:34 PM