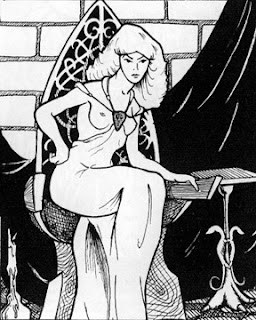 Just wanted to offer up a link to this site, where Christian is producing a good old fashioned digest size 'zine. It's reminding me very much of the good old days, 'lo those many years ago...
Anyway, I may have to subscribe if I can remember to save some money for fun things again in the near future....these days, in the world of the internet and blogs, an old fashioned print fanzine is a genuine curio worth investigating!

Speaking of the old days.....anyone remember this game? I've been keeping an eye out on ebay and elsewhere, hoping against hope a copy resurfaces, but so far no such luck: 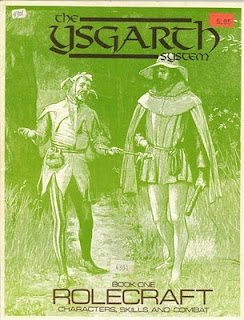 ...Or its first edition, the one I was most familiar with. I purchased them both directly from Wargames West in Albuquerque here, all those years ago (Wargames West still exists, sort of, by the way, albeit not as a mail order retailer or distributor; its called Active Imagination these days and is Albuquerque's best game shop; it's also where I hold my Wednesday games).

Ysgarth was one of those  peculiarities, a distinct artifact of gaming's early days, an experimental system loaded for bear with exotic and esoteric mechanics and rules for extreremly detailed "simulationist" play styles. I really wanted to run it, but the opportunity never arose, and by the time I was in a position to do so and surrounded by like-minded gamers, it was more or less too late to generate renewed interest.
Posted by Doctor Futurity at 6:00 AM