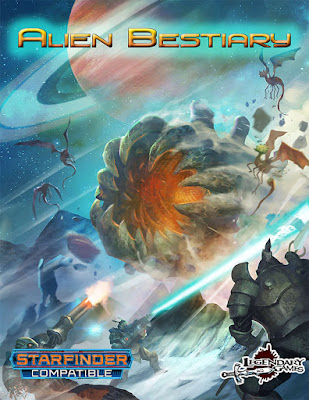 A very useful book for any Starfinder gamer is the Alien Bestiary from Legendary Games. This is a 450 page monster book filled with much-needed new and reinterpreted beasties for the Starfinder game system. Highlights include:

--Full color format for about 300 monsters up to CR 30
--A bunch of the "best of" from Pathfinder adapted to Starfinder (such as much-needed stat blocks for Neh-Thaglu and other "scifi themed" monsters)
--Cthulhu beasties including Starfinder adaptations of Cthulhu and Hastur
--There's content on using this with Legendary's Aethera setting, but it does not get in the way of using this as a generic resource
--A section in back with new traps, some new rules, spells, and a bit on cults

Overall it's an indispensable book. A small number of monsters have some cross-over with the Alien Archives (mi-go and kytons, for example) but arguably the Bestiary's got more interesting interpretations. The kytons, for example, are provided in elaborate detail and include a bunch of the kyton subtypes that have appeared in the past in Pathfinder, facilitating whatever weird Hellraiser/Event Horizon scenarios you might imagine, and which can complement and enhance the Velstrac (the futuristic kytons in Alien Archive 2).

One area the book is a bit weak in is racial templates for player characters. The Alien Archives include a large number of racial options for players to pick from with the stat blocks necessary to make whatever weird characters you want, but Alien Bestiary omits these racial stat blocks, even when there might be a monster type that would fit well. That said, the majority of the monsters in this book would not, on average, make for good PCs....but for the few that would this omission is noticeable.

One other complaint I have heard but can't verify is that there is a fair amount of recycled artwork. I presume this is art from other Legendary Games products, but don't own many of their other books for Starfinder (yet). Obviously whether this is a problem or not depends on taste, but it is not a concern for me.

The editing and design on the book looks good and I have encountered no real errata issues so far. Likewise I have encountered no stat block issues; everything functions well in Starfinder rules as intended. There is also a 5E version of this book through Drivthrurpg although I have not seen that version, but if you want to add some SF weirdness to your 5E game you can definitely do it.

Overall a Starfinder GM will find a lot here to like. The conversion monsters are worth getting, as they will alleviate the need for you as GM to do Pathfinder-to-Starfinder conversions, and the overall number of creatures that are both new and new to Starfinder make this an invaluable addition to the Alien Archive books; if you have those two tomes plus this then you have over 500 stat blocks of monsters to choose from for your Starfinder games. The book sells for $70 for a print plus PDF edition. Even at that price point this book is well worth the price.

Grade: Solid A, a useful book for any Starfinder GM