The Design Mechanism is hard at work, and Mythras has a new book out in POD: Worlds United, a sourcebook for gaming in a futuristic alternate reality 1959 where you too can now adventure in a world filled with rockets, rayguns and Venusian dinosaurs. I have been waiting for a SF setting book for Mythras for a while now (M-Space is interesting but not really as robust as what I need), and while this isn't quite it either the core conceit of vintage nostalgia planetary romance might be a really useful toolkit for some games.

Anyway, check it out! If someone could do a review I'd love to read more about this so I can determine if it's right for my table or not. 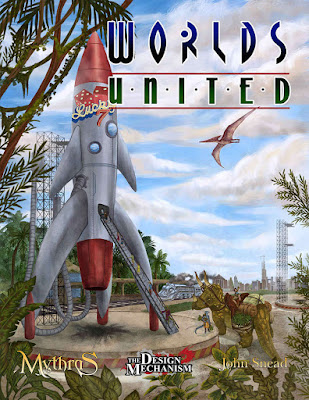 This got me to thinking about the retro planetary romance genre and specifically about how it seems like there's a strong tendency for many reasons for this sort of retro vintage take on science fiction to perpetuate in role playing games. Long after the genre was more or less abandoned by film (which dives instead into modernized science fantasy), and contemporary fiction to the best of my knowledge doesn't do this sort of thing (it, too, has progressed to a point where there is no return to the vintage form of this sort of genre), the retro SF genre seems to thrive, or at least continue to manifest in RPGs.

Despite being deeply into contemporary variants of the same sort of genre as Starfinder and Destiny, I don't really have much investment in the vintage/retro SF subgenre as its own thing. I have no particular interest in replicating worlds in which Venus wasn't a hothouse to begin with that requires some level of terraforming to normalize, or in which Mars was really like Wells envisioned it all along. Of far greater interest would be a setting which takes what we actually know about the solar system in 2019, extrapolates in to the future, and then figures out interesting ways to reconcile the fantastical elements of prior eras in fiction in a manner which both moves the setting forward and also avoids a conflict with the ever-present sense of verisimilitude that makes good SF feel right.

Given how often this genre continues to pop up in RPGs...we have Worlds United, Slipstream, Space: 1889, Rocket Age, Buck Rogers, various versions of the Barsoom/Mars series, and quite a few others I haven't even thought of.....is this a market in high demand, or just a corner of the hobby with a lot of dedicated fans? I'm curious if there's a real market for this, or it's just a niche market with a hardcore base.

I can completely understand the core conceit if it's what excites someone....I don't want to sound like I am denigrating the subgenre because hey, I like Starfinder and I consider that to be a very niche-within-a-niche subgenre of "space fantasy sci fi" as well so I completely understand the idea of liking a very specific take on a genre (I like hard SF for the same reason). But every time I try playing or generating interest in a setting that asks me to pretend like I don't know everything I know about Mars or Venus, I feel like there is a missed opportunity to take everything we DO know about Mars and Venus and then wed that with a futuristic vision that still manages to capture the retro elements of the past without removing the interesting parts of a very real present understanding.

POST SCRIPT -- who am I kidding, I am totally going to get this book....a new Mythras tome, absolutely! I am sure it can be mined for all kinds of useful material for any number of weird science fantasy games.
Posted by Doctor Futurity at 9:38 AM