The Fantasy Trip is Here! 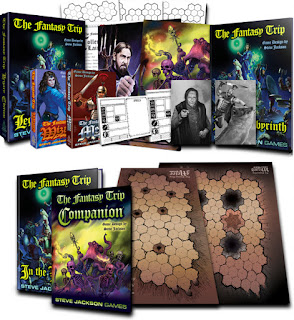 It was well worth the wait, too....the box that arrived unpacked to reveal so much stuff I am still processing through it. I bought the "I want it all" level on the Kickstarter, so I definitely got exactly that... The new Fantasy Trip* includes, among other things:

--1 box bigger than my game tote that hauls all of my D&D or Cypher books for a game session
--one copy of The Fantasy Trip main rules "In The Labyrinth" in soft cover
--another copy of TFT "In The Labyrinth" in hard cover
--one deluxe, four panel sturdy (heavy stock) GM screen
--a box of punch-out megahex pieces
--two maps, of the world of Cidri and a local town
--a folio for your records
--a booklet of character and reference sheets (and a double sided dungeon map)
--a card-style pack of pregenerated characters (and some blanks)
--a pack of what look to me like post-it sized character sheets
--another pack of what appear to be deluxe sized "post-it" style character sheets
--two special dice
--a new modern box version of Melee, which includes counters, map, rules and three dice
--a modern box version of Wizard with counters, map, rules and three dice
--a modern box version of Death Test, with Death Test 1 and 2 plus counters
--A full size book plus map of Tollenkar's Lair
--A large storage box on the side with a copy of the retro-classic version of Melee & WIzard combined boxed set (this set uses the new sturdy plastic box format, and has rules plus counters and maps for both games in one)
--a large, durable full color Melee map on rollable material that reminds me of mouse pads
--a similar, even larger map for Wizard of the same material
--Two sturdy folders for characters or whatever you want

Missing from my box set is the TFT Companion, which I am told from recent updates was left out of the first few shipments but should be coming separately soon. I'll try to take photos tonight. The stock picture above does not do this justice.

I owned TFT's In The Labyrinth back in the day, and distinctly remember the magazine-like quality of the original cover and printing. The new version of the core rules is a major improvement, sturdy and designed for use. The entire game, in fact, demands to be played, just oozes with potential that commands your attention. I kind of wish I had ordered two, so I could put one on a shelf as a collectable, because the copy I got is going to get some serious game time.

My son was also very excited to see the game, and I may need to order a copy for him as well. He's young, but he's got a real interest in learning and reading to play already, and the focus on bits and pieces in TFT is right up his alley. Plus, the game on review so far appears to be quite kid and millennial friendly. I think if SJGames can get some people playing this on Youtube then they will see that it has a lot of traction.

This is a lot of stuff. But I see that the fortune teller down by the orange grove near the old scarecrow was totally right, The Fantasy Trip is indeed about to dominate my game group's near future!

*Which is just the old Fantasy Trip, but now with a major facelift
Posted by Doctor Futurity at 8:27 AM

Email ThisBlogThis!Share to TwitterShare to FacebookShare to Pinterest
Labels: the fantasy trip