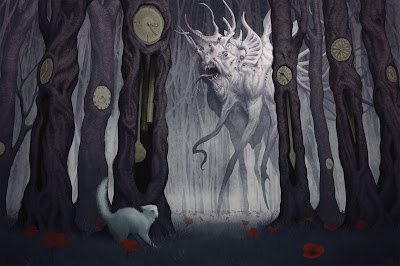 I actually picked this up. Not through the Kickstarter, but after reading a great many "we're playing this and it's fun" posts around the internet, followed by asking my local game shop owner if she could secure a copy. Unexpectedly two weeks later there it was, and another two weeks later I scraped up the $250-odd dollars less discount for the monster.

First, it's so large and heavy that when I stuck it in the front seat my car complained I needed to buckle it in.

Second, it really is heavy. According to Amazon it's almost 29 pounds.

Third, when I got home and tried to unfold the monstrous box, which is designed to be a permanent storage unit with a thematic element tied to the game, I realized I didn't have enough free table space for the endeavour and had to make some serious room. 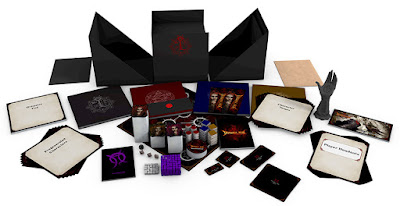 That includes four hard cover tomes, a soft cover art book, 1,000 cards, a withered claw, a bunch of round cards and a ton of tokens. There's numerous envelopes filled with props and other things, cloth fold outs, maps, stuff I haven't quite realized the purpose of yet. The only item missing was a metal medallion but I think, near as I can tell, that it was a Kickstarter exclusive.

Reading the game is exactly like reading any other fine Monte Cook produced product: fun and engaging, with a good deal of expository world building, but it does this in a manner I would characterize as being distinct to Monte Cook's style and less like other comparable products in the broad genre of "modern weird RPGs" such as World of Darkness or Unknown Armies....this is a more readable, engaging product, essentially, one that will look familiar to any fan of MCG's other product lines.

A lot of the content of this book....the props....really are props, designed to enhance game play but not necessarily required for gaming. I have never been much of a prop person at the table, but the Black Cube makes adding them in easy. If you're a fan of the deluxe products released for Call of Cthulhu with lots of handouts, you'll like this.

Mechanically I can see the underlying skeleton of the Cypher System, but grown in new and different ways. I am intrigued to see how this plays, and how it integrates the core conceits of the parent system in new directions for the theme of the product.

I'll write more about this soon.....lots of reading to do! But on the surface it looks like a weird and intriguing dive into surrealist gaming with magic that walks a line between Salvador Dali and Guillermo del Toro, and I am kind of hoping I can squeeze some Twin Peaks David Lynch style inspiration out of it, too.

Posted by Doctor Futurity at 8:47 AM