Just got notice from Modiphius, the most prolific publisher in gaming, that Symbaroum has two new books: the Monster Codex and the Adventure Pack 3.

If you're not familar with Symbaroum, it's a Swedish translation of a grim, low-magic dark fantasy world that has a really interesting design and look to it. The setting of Symbaroum is one of an untamed Davokar wilderness where the men of Korinthia are the intruders, and many strange things await discovery; and much worse waits in the vast forests and mountains to push back, hard. At minimum the game is worth its weight in the fantastic art alone, but the system itself looks quite playable, and it remains on my "must collect and read" list, perhaps one day to graduate to some actual play sessions. 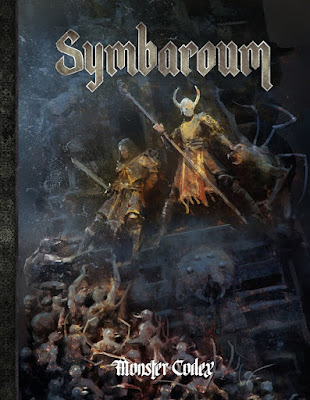 At minimum, I've determined that it is not worth wasting one more second on the Pathfinder 2 playtest for now, as even Paizo on their own site is admitting they need to do some serious work. Any such effort I expend should be placed on cool games like Symbaroum, or Lone Wolf RPG, or even the more generic but intriguing Fantasy AGE.
Posted by Doctor Futurity at 9:21 AM

Email ThisBlogThis!Share to TwitterShare to FacebookShare to Pinterest
Labels: symbaroum