Mulling Over the Pathfinder 2.0 Playtest 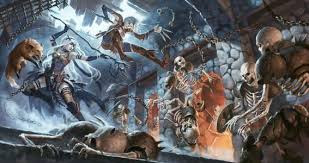 I've had some time to read through the Pathfinder 2.0 Playtest rulebook as well as the online Bestiary; the playtest adventure's been waiting but the premise sounds exciting if you're in to Golarion. That said, when I run this (and I plan to pitch a try-out to my Wednesday group, off-week) I'll probably do my own thing. I know it doesn't help Paizo, but it does help me. Heh.

In reading through the book and messing around with it to roll up some sample characters I've been keeping an eye out for "4Eisms" that many people are saying they are experiencing with the new playtest. I'm not sure if these are observations from people actually reading the rules or running it, but the idea that there is more in PF2 with 4E D&D DNA in it than, say, 5E DNA is intriguing, especially since I wasn't really seeing it (unless you argue for the extremely superficial nature of the skill/proficiency/ability/spell block layouts, which are coincidentally similar to 4E only in that they try to make the information you need as explicit and easy to find as possible). Contrast with 13th Age, for example, which unambiguously extrapolates from 4E for its power blocks and you'll see a world of difference from what PF2 is doing....which is to try and mitigate "information overload" by sticking to an easy to follow format.

Despite making efforts to clarify, clean up, and tighten the overall mechanics of the system, PF2 seems to be trying exceptionally hard to project a more consistent sense of balance in the game experience. Character creation is where this is most evident. Much like 5E, it appears that PF2 is trying to structure class design around a consistent and predictable series of advancement stages. This has the side effect of making it less likely you will have an outliers in design over time....min/max gamers will, much like with 5E, have a harder time of gaming the system, and people who love to see where things are broken (for better or worse) will find fewer opportunities to do so.

A downside to this is that certain elements of randomness fade away rapidly. PF2 still allows for an optional stat roll system, but almost everything else that might have an element of random chance is gone. Hit dice....gone. Feat choices are tighter now, and happen for certain types of feats at certain times. Feats have lots of types (they did before), but these types tell you which group to pick from at what level.

Of really interesting note in the new edition so far is how they handle bonuses, modifiers, and stacking. The rules are on pages 289-290, and they are insanely simplified from PH1. You have three bonus/penalty types: circumstance bonuses, conditional bonuses, and item bonuses. The stacking rule is what we know from before: bonuses of the same type don't stack, and you only use the highest bonus. However, with only three types of bonuses, you're not going to have to spend a lot of time trying to sort out what sort of bonus applies in a given situation. Penalties apply in the same manner (same type penalties don't stack, only the worst applies), but the rules allow for one special exception, untyped penalties, that seem to cover lots of other broad general modifiers, particularly with combat actions. There's also a special exception on how to handle shields and armor, but it seems to be the only identified outlier.

While one might question whether or not the game's underlying mechanics are still complex, the simple act of tightening up stacking mechanics, along with structuring everything around a more tightly defined level framework for the overall game experience, means that the way PF2 is trying to simplify the play experience is by narrowing the number of choices players have, and reducing the number of potential moving parts. It's not that the core mechanical elements weren't in PF1, but rather than the extra complexity made it easier to overlook, forget, or game the system on certain modifiers. Now....you have a pretty straight forward rule of thumb to refer to when eyeballing why a PC seems to have an outrageous AC, and hit points will always be the same for characters of a certain ancestry/level/class/Constitution.

Some might argue --rightly so-- that this removes some elements of chance, variability, that makes the game inherently more fun. Others might argue that it makes the game more predictable, and therefore more consistent, which can translate in to a better experience. Neither side is wrong.

I'm still mulling over the resonance rules, however. These seem to be the point system which you use to power up magic items, and they appear to be a limiter designed to keep PCs from abusing too much magic. However, the practical application seems to suggest it will only be a limiter at low level when you have few resonance points, and at high level PCs will have more than they know what to do with. It feels to me like this is a rule that can't really be "seen in action" without an actual playtest, so I will reserve judgement until I see how it functions in actual play. But right now, eye-balling it from a spherical cow universe, I find myself wondering if it's fixing a problem that must exist but which I've never seen in my games before.

Anyway.....more to come. Maybe by next week I'll have some actual play to report, too. For now, though, it is interesting that every time D&D or its relatives get a new edition, it is often with the intent to completely retool whatever was there before. I think for a lot of gamers, building off of clasic PF1 and simply fixing specific issues was all they really wanted, but PF2 is going in a direction closer to what 5E did, when it decided to build on the concept of bounded accuracy. PF2 isn't doing bounded accuracy, but it does seem to be trying to limit what you can build in the game even as it creates a metric ton of invisible walls for the play experience.

Reading the Playtest right now, while I've dived off the deep end into Cypher System territory, makes for an interesting experience. I keep weighing the system against what I know D&D 5E can do with less effort (albeit at the expense of the complexity I enjoyed from PF1), even as I mess around with another system (Cypher) that strips all rules down to only the essentials necessary to move the story forward. It's a weird time to be trying to indulge in this new iteration.

EDIT: In re-reading what I wrote it's worth noting that overall I'm really interested in the PF2 playtest, and like what I am seeing....but I am tempering this with exploring the feedback I see on other sites. For example: I love much of what is going on here, but it will matter not at all if the game's overall reception leaves it in the same dustbin of the game store shelves as Fantasy Craft (another exceedingly well designed 3.5 spinoff that no one plays).

A lot of the critical comments on some sites (such as rpg.net) appear to be from people who wouldn't play PF1 anyway, so ultimately PF2 needs to appease its core audience, and its lapsed audience (like myself); not the audience that never will play it, or landed with D&D 5E and cares not for any subsitutes. Paizo needs a game that will convince active PF players to keep going with them, and lapsed PF players like myself to return to the fold. That's a lot of bottled lightning there....but I feel like the playtest doc is about halfway to a decent spot toward capturing that lightning....can it make it the rest of the way?

Posted by Doctor Futurity at 2:32 PM