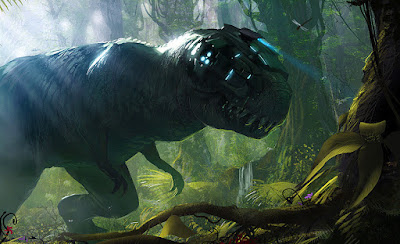 We had some players out tonight, so my wife offered to run a one shot. The game was a genre mashup (sorta) of the Cypher System Predation setting and my wife's general experiences distilled from a million hours of her playing Ark: Evolved (a survival game with dinosaurs in which even the game griefs you).

Our team consisted of....

Several hours surviving on Dinosaur Island after aliens kidnapped us all from the timeline while we fought other survivors and survived various prehistoric encounters later, we wrapped with a "...to be continued" in our future.

It was fun getting to play the game, rather than run it. I really like this game. It's infectious just how easy it is to do literally anything you want with it. I spent time thinking about how to carve out the Starfinder setting and style and make it a Cypher game. I mulled over trying out Fantasy AGE but kept going back to the new Numenera Discovery & Destiny books instead. I am thinking obsessively about how to get my Wednesday D&D group to drop D&D and play Cypher System instead, using my Chirak setting with the Cypher rules.

Call of Cthulhu may be the only game that can break this curse. And hell's bells, I have spent serious time thinking about how to use Cypher for horror and historical gaming, too.

Posted by Doctor Futurity at 12:37 AM