Gaming on the Nintendo Switch - Skyrim, Zelda, Gear:Club and More

A few months ago I decided to take the dive and purchase the only console I didn't own, the Nintendo Switch. This was based on at least four factors:

1. The Switch had gotten consistently good reviews from most interested parties, and Tobold on his excellent blog talked enough about it (and Legend of Zelda) to convince me that this wasn't a game to miss, and also that maybe the Switch wasn't another Nintendo dud.

2. The concept of a portable Skyrim was overhwhelming my common sense.

3. I had come to the conclusion that the reason I rarely engaged with my old PS Vita was that the screen was too small, and that it had no easy way for me to hook it up to a TV (and that the one option that existed was difficult and limited in functionality).

4. Finally, it was the only gadget console I didn't own and that just wasn't gonna fly in my house!

Anyway, the Switch has proved to be a really fun device, and possibly even more fun, overall (even if in smaller bursts) than the Big Two that tend to dominate my house thanks to their specific offerings (Destiny 1 and 2 for the family, The Divsion for dad, Monster Hunter: World for mom and pretty much Everything Else but especially Lego games and Minecraft for Marcus). The Switch has instead held sway as a portable that works really, really well and doesn't induce eye strain like the PS Vita, as well as being sufficiently portable that we could pack the whole thing up, docking station included, and take it on trips where we hook it up to the hotel TV. It's battery life as a handheld has also been much better than I expected, and one evening my son managed to run it down after about five hours of play.

For my own purposes I played many games on it (and a lot of Skyrim and Xenoblade Chronicles 2) well before I dabbled into the deep waters that is The Legend of Zelda: Breath of the Wild, which is a contentious game since everone else in the house also wants to play it, but do not want me playing it where I can accidentally spoil it for them. Luckily my wife's been playing a lot of GTAV on a special roleplay server (yeah, that's a real thing that exists) which keeps her distracted, and I caved in and got Minecraft for my son on the PC so he could play AlienvsPredator mods in the game which has left me safely ignored, and enjoying what I would describe as a more colorful, vibrant open world exploration experience that is like a mellowed out version of Skyrim....or maybe to use a further analogy, Zelda is to Skyrim like The Hobbit (the book) is to its successor The Lord of the Rings (also talking about the book here).

Picking it up and playing on the go is a lot of fun, but docking it and playing on the available TV is even better. Being able to pull the whole system and move it to a different TV is actually quite handy in my household, which is dominated by 2 UHD TVs and an HD TV (and two of these TVs are also serving as monitors). If my son wants to play on the PC, and I allow it, then I can move to the living room TV and plug in the Switch, no issues at all. If I want to lounge in the safety of the bedroom where there are no televisions and play anyway, the Switch makes this possible.

So far the only negatives I've encountered with the Switch are as follows:

720p Resolution is more normal with the Switch, and wouldn't be much of an issue if I didn't also have an Xbox One X and PS4 Pro. Playing a game like Doom or Skyrim on it for the portability is awesome, but if you happen to have Skyrim Remastered on PC or Xbox One X then it's hard to want to invest big screen time in the Switch version of either game. However, being able to play either game on the go is priceless.

The Switch also doesn't currently appear to have any "family sharing" feature similar to the Xbox, which means I am not sure if I get my son or wife a Switch of their own that they could play my games on their account. Currently I can log in to my son's Xbox One S and he can play my games, even if its on his account, so long as I'm logged in (with a few notable exceptions). Even the PS4 allows this, although it has fewer family-friendly features than the Xbox environment does, but the Switch seems to lock these to your account. However, there's an upcoming online service that Nintendo intends to implement which may well provide for a family account sharing option, so fingers crossed.

Finally, the Switch has limited memory options. I have a 128GB mini SD card loaded up, and I think I can get a 256 GB card down the road, but while many of the games are small loads of less than 1 GB in size, all the really good games tend to lean toward 10-25 GB in size, and that means having just a few from the digital store can eat up your space. This is a very personal issue, though, and if you're like me and tend to buy many more games than you can find time to play, then you may notice it....but if you're a more focused and non-obsessive collector type of gamer who likes to finish one game at a time, then you may never notice the issue at all.

So what games have I been enjoying the most on the Switch? Well, the one's I've found the most overall fun and time consuming so far, in no particular order, include: 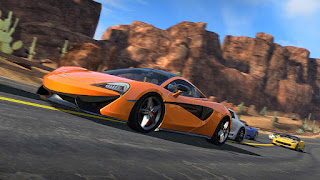 This racing game is no Forza Horizon 3 but in terms of general racing games its a lot of fun with just the right sort of depth for a game that plays well in both big screen and handheld mode. In fact, if you play it in both modes it feels (to me) like the handling of your vehicle adjusts in response to the way you are playing, making handheld and pro controller play equally smooth and comfortable. The game is designed around buying and upgrading cars and your workshop and racing various circuits of different types; it's a "lite" version of Forza, but the result is a great experience, and playing this while on my recent airplane trip was quite satisfying (pro tip: playing a car racing game while the plane is ascending or descending is not a good feeling, though!) 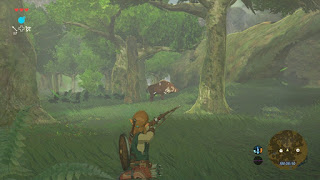 Legend of Zelda: Breath of the Wild

Yes, everyone has raved about this game already, but I will add my two cents and suggest that it's a game with the compelling style of play from Skyrim, but with a more faerie-tale driven element to it, and a escalating series of mechanical elements in the gameplay that one can easily obsess over. Nothing about this design fails to tick the checklist of "things I love in a game" and it's mythology makes for a healthy introduction to the Zelda universe for people who may not know much about it (and considering the last time I delved into a Zelda game it was the Ocarina of Time on the N64, I think I count). If you like Skyrim, and don't mind if most of the violence is exclusively aimed at various goblinoids and monsters, then you will love Breath of the Wild. 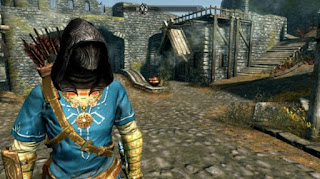 Duh, but also, yeah, Duh! The existence of this game on Switch was for me the main selling point on a Switch, if only just to see it work on a portable, and boy, does it work. The graphics are low on a full screen version, and you can tell it's at the low end of the scale compared to Skyrim Remastered on the other consoles, but on a small screen it's hard not to argue that it looks great. Even on a big screen the game is a lot of fun, although it lacks the workshop and ability to load mods, unfortunately. 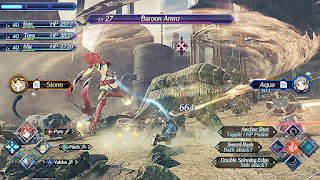 Ordinarily this is a genre of Japanese RPG I might at best dive into for an hour and then get really annoyed with and move on from. Xenoblade Chronicles 2 is a different breed of game, however, in that it has meticulously careful voice acting with great voice actors who really improve the game over others of its type in dramatic ways, and the game is structured around expansive open world exploration mixed with focused quests in a way that I feel better reflects the genre and play people like than, say, Final Fantasy XV (which I feel tries to hard to be something it is not). I'm still plowing through this game (and likely will be for months to come) but it is definitely recommended. 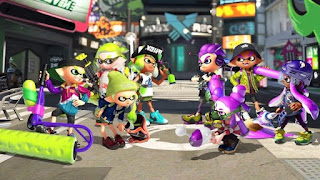 This is not a game I thought I'd be playing, and I bought it because I thought my son would get in to it (he's been obsessively playing the Switch version of Lego City Undercover). Instead, he got a little frustrated with this one after a while and dad tried it on a lark. Well, I can see why he got frustrated....the game has a really interesting mastery curve, and even lets you skip hard levels in the single player "Octo Expansion" campaign, although I have not bothered to do so. The design and feel of this game is what I'd call a version of Saints Row (stylistically) if it had been done by Nickelodeon with Cartoon Network and a dollop of Adult Swim mixed in for good measure; the storyline about humanoid inklings, half human/polymorphic squid things which generate copious quantities of ink that they use as both weapons and transportation is hard to fully digest as a concept, but if you just go with it and accept the game for what it is, there's a compelling hybrid shooter/platformer experience to be had that is a ton of fun.

Honorable mentions go to some remastered classics that are on the Switch, such as Bayonetta 1 and 2 (and you can only find Bayonetta 2 on Nintendo!), Resident Evil Revelations 1 and 2, Payday 2, and of course Doom. Doom is a game I have had my ups and downs with, but I have really had fun with it on the portable end....I don't bother to load it up for a big screen event (I have it on PC, after all) ordinarily, but as a fun thing to play in portable mode it's hard to beat.