The weekend game featured, in no particular order:

--A phantom tower which was trapped in time
--The heart of the Obsidian God, which turned out to be a trapped singularity harnessed for its power
--A vengeful, ancient orc bound to a golem by an alien symbiote who lives only to kill the enemies of his ancient people
--A seemingly dead or undead wizard trapped in stasis who communicates through his magical scrying orb called the Elocutor
--A vast floating city in a star system bathed in red light in the interstices between universes
--An ancient army of parasitic beings from another dimension who destroyed the floating city of angels and now seek to bargain a way into the homeworld of the PCs

Stuff like that is why I like Cypher System. None of it is specifically "mechanics" based but all of it is exceedingly easy to do in the Cypher System for GMs who want to do this sort of thing...and the copious sourcebooks out there, between Numenera and The Strange, make it really easy to borrow from both iterations of the game to build whatever you want in Cypher.

Anyway, we're five sessions in and some interesting questions are being raised as players advance in level, but the GM side of the equation remains smooth and fun. They are probably going to have to demand Call of Cthulhu returns soon if they want to break the grip this system has on me! 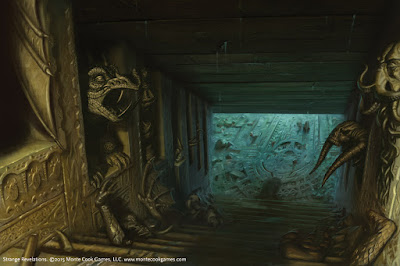 The interesting thing game night was not Cypher System (which continues to excel) but the pre-game talk about Pathfinder 2.0. I've been reading the book from a GM's perspective, but I think Paizo has problems.....players do not like what it's got on offer. The system codifies too much, and takes too much away, and tweaks things that most people I've talked to do not feel needed tweaking. If Paizo doesn't get this under control, they may have some serious problems if the edition published next year is not seriously revised from what they just released. And that's not me specifically stating this....it's the summary or pretty much everyone else's opinions so far.

I am starting to think they should have gone for more of a "1E to 2E" switch rather than whatever it is they're doing now.
Posted by Doctor Futurity at 11:11 PM