First, just wanted to mention that I started typing this on my new Galaxy Tab S4 10.1 inch tablet, which so far is proving to be a worthwhile investment. The Logitech Bluetooth keyboard/cover combo is rather nice, albeit a bit small....but beyond that it's pretty serviceable, if not as cool as the Surface's flexible keyboard. Unfortunately every five seconds or so Blogger would try to update and when it did the cursor would decouple from the typing area, so now I'm back on the old desktop. But enough of that! 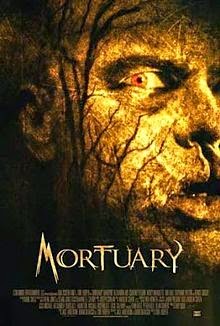 Mortuary is a 2005 horror film with the name Tobe Hooper prominently displayed as director. The opening premise is simple but rife with weird promise. The film opens on a family of three, a mom, her odd daughter and snarky teenage son (played by Dan Byrd who steals much of the show) as they set off to start a new life in the wake of their father's death. As it turns out, for reasons never quite established the mom is keen to start a career as a mortician (or maybe resume one?) and she has invested in an abandoned cemetary/mortuary combo in some small back-assward California town. The place is a shambles, a relic of a complex ripe for horror films. The guy selling it to her is a bit crazy, one gets the impression....or just happy to have a sucker to take over the operation. A normal person would have called her in on child abuse for subjecting her kids to the place. 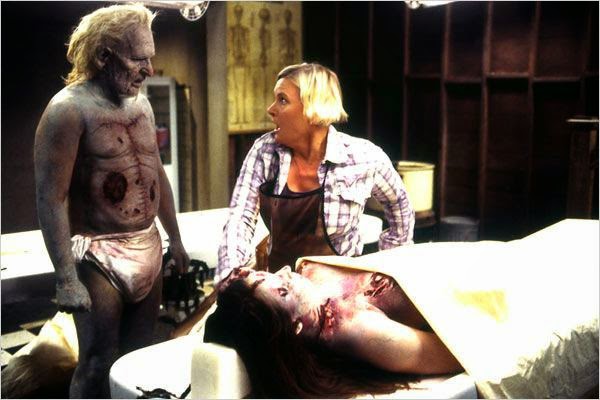 When the mom delves into the graveyard and stumbles across a tomb with the nigh infamous Lovecraft "...even death may die" quote, verbatim, chiseled in stone I decided that this movie was going to be fun if nothing else. As it progresses along we discover that there is a lingering evil in the place, a story about a made couple who used to run the mortuary and had a deformed son that they kept locked away, until one day he escaped and murdered them, and all the while strange black ooze creeps out and snacks on blood spilt by the mom, who thankfully is working only with dead bodies because she would never get a medical license, let me tell ya....

In surprisingly quick order the movie escalates from "could a creepy deformed madman be lurking in the caverns below the cemetery?" to full-on Reanimator-style zombie invasion, and the similarities are just significant enough to suggest that the people behind this movie really liked those earlier films. It maintains a camp quality to the entire experience, much as most 80's style horror films did, playing it all straight while still throwing just about every gory bit they can at the screen. The bulk of the FX is makeup, but the blood monster is CGI (a sort of unholy love child of a shoggoth, the sarlac and the Black Oil virus from X-Files).

2. The Lovecraft moment (a quote from The Nameless City carved on a tomb)

3. Smart, fast possessed undead who become a terrifying inversion of what they obsessed about in life

5. Manages to get both the hillbilly mutant, shoggoth-thing and reanimated dead in all at once

6. Gratuitous disrespect for the dead....even BEFORE they get up and start chasing the living!

When we get to the end of the ride (and it's definitely a ride) the only question is just how the monsters will manage to eat everyone at the end....and we know they will. But it's a very fun ride along the way, with a shade of Movie Lovecraft* permeating the experience. If Jeffrey Combs had shown up at the end with a giant juicer I would have been not at all surprised. A solid B+++!!! 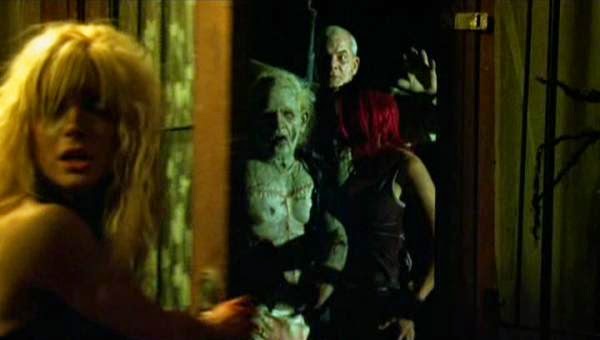 *You know what I mean: Lovecraft through the lens of Stuart Gordon
Posted by Doctor Futurity at 6:00 AM