D&D 5E: The Justicar - a level 5 skeletal Paladin of Vengeance

The DMG offers lots of cool options, one of which includes NPC stat details for making class-based monsters that are under 1 CR in base value. This list includes some surprising options, including skeletons....of which I have offered one such example here for perusal or use as a future NPC. Naturally a open-minded DM could even let players use these monster stats to make some interesting PCs (although the book sort of dodges the subject between this chapter and the one on actually creating PC variants). 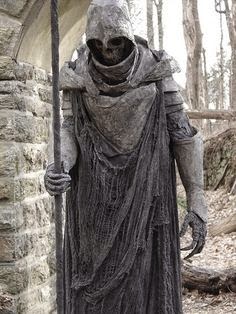 Equipment: tattered clothes and tabard of his justicar’s station in life, body entwined in the barbed chains that dragged him beneath the earth during the battle, a thick, dark tattered cloak which he uses to conceal his form, heavy gloves and gauntlets, a full visored helm.
Trinket: barbed abyssal chains which enfold his body and armor like a shroud of doom.

Personality Trait: singular mind for vengeance, The Justicar was raised from the dead in a cruel twist after he was slain one year prior while trying to kill the balor Rusivag at the Battle of Three Hills. He seeks only vengeance against all beings of chaos and undeath now.
Ideal: the murder of the unjust and the spawn of chaos; the ultimate murder of Rusivag.
Bond: The Justicar still remembers snippets of his living existence, and feels a strong compulsion to protect those around him who are innocent.
Flaw: He has lost so much in his transition from living to undead, his soul is a fragmented remnant of what he once was; he is driven only be the potent memories of his last act of vengeance, to slay the balor and all who stand against the righteous might of Hyrkania.

Asrudan Dann Faenor was a knight of the Order of the Justicars out of Krythia, dedicated to the religious teaching of the death pantheon, and specifically Kavishkar, the lord of judgement. It was Asrudan’s fondest desire to execute the foes of the empire of Hyrkania in the name of his holy god and the emperor.

During the Battle of the Three Hills near Loroden, the clerics of the Divinate summoned a balor named Rusivag and a small army of demons. Asrudan was one of many who fell trying to reach the balor to destroy the beast. He was dragged beneath the earth by a mass of abyssal chains, which cut deep into his body, flaying flesh from bone before he had even died. The chaos magic of the chains lingered even as he perished in his sudden earthen grave.

A year later, he awoke. Asrudan barely remembered his name, and knew only that he was the Justicar, the one who had somehow been given a second chance. His memory of justice….of vengeance….so strong in mind that it consumed what little was left of his soul, trapped by the chains of chaos which now wrapped around his bones and armor like a proud mantle of what he had survived.

Justicar moves by night whenever possible; he is cogent enough to realize that his nature is unsettling amongst some and terrifying to the rest. He has developed the art of disguising himself whenever possible to avoid his bony guise from being revealed, and he avoids other members of his order, whom would slay him as an undead abomination. He feels he was given a second chance by Kavishkar to fight his way into the realm of the Einheriar, to slay the spawn of chaos, the undead, and the wicked….and ultimately to grow strong enough to murder Rusivag in the Abyss.

When Justicar speaks his oaths they sound like harsh whispers to the ears. He is otherwise unable to speak with any who do not use a Speak with Dead to converse with him. Justicar is literate, and has on occasion used quill and parchment to convey messages, though he must remove his gauntlets, exposing his bony hands to do so.
Posted by Doctor Futurity at 6:00 AM