D&D 5E: Quick and Dirty Monsters from the DMG: Nuckelavee

The new Dungeon Master's Guide includes two ways to design monsters: the long, hard route which ends up with a fully featured stat block, and the quick and dirty route. I wanted to see what sort of goodness the quick and dirty method generated, so here goes:

My current group is averaging level 5 now (on both Wednesday and Saturday nights) so I'll look at a challenge rating 5 monster first, which is described as a fair challenge for a group of characters. Actually, my group tends to lean to 7 or more players at times so we'll make it CR 6 just for good measure.

A CR 6 creatures has a default set of stats like this:

The quick build method has you figure out CR first, then determine the average stats based on that. Afterwards you modify the stats to reflect what you want or need, and then adjust the CR accordingly.

So....what do we want this quick-build monster to be? I'm going to go for a kind of lesser Nuckelavee, because its a thing that lurks in the region not far from dark and dreary swamps like the ones both adventuring parties are currently stuck in. The nuckelavee is a mythic beast, a skinless horse-being with a humanoid rider's upper body grafted to the horse's body where a normal rider might sit. The beast's black blood pulses through yellow veins, and it's humanoid head has a single baleful eye. The creature's mouths (humanoid and horse) can gape wide and emit noxious, plague-bringing gasses and it can affect the weather.

With that in mind, I figure the Nuckelavee has no real armor, but probably has supernatural protections, so AC 15 is fine. 160 hit points sounds fine to me. The suggested damage of this CR means (averaging 4.5 per D8 rolled) around 9-10 dice of damage....per round. Yowza. But that can be split into a few attacks, and a lot of it can lean on the breath attack. With that in mind, I'll work out the stats like this:

Multi-attack....can attack with two claws or claw and hoof.

Hoof/Stomp attack is +6 attack, dealing 2D8+8 damage. Each claw deals 3D6+5 damage. That means average damage output per round will be 17 for the hook strike and 15 per claw. So between 30 and 32 damage per round for these.

I'll grant him a secondary feature....long reach (10 foot reach with his distended, long arms) and if both claws strike he deals another 2D8 (average 9) damage per round.

Then the breath weapon: it recharges on a 5,6 we'll say, and following the suggested monster traits it will presumably strike an average of at least 2 people. We'll say its a poison cloud, dealing 3D8 (13) poison damage plus the poisoned effect (save ending) to everyone in a 30 foot radius around the Nuckelavee who fails a DC 15 Constitution save vs. poison. He can use it as a bonus attack, and it's limiting factor is its recharge.

So per round the Nuckelavee can get at least 30-32 damage in per round, an additional 9 with two claws, and once every third round roughly he can deal 13 poison damage to everyone. So his low end output will be 15, his typical output will be either 32 or 41, and every three rounds it spikes to as much as 54.

Since I'm adding traits I decide to include two others: he's immune necrotic, poison and drowning/breath effects (doesn't breathe), and resistant to cold. While the temptation to make him resistant to regular attacks is there, I'll give him magic resistance instead; let this be one the fighters fare better against!

You know what...scratch the bonus action for the breath. I'll add it to the multi-attack.

Alignment....clearly a chaotic evil or possibly neutral evil being. I'm going to suggest the nuckalavee is some sort of hideous undead fey, so there you go.

Lastly I'll add a fear effect from the traits: horrifying visage, as a banshee. Seems only appropriate!

I'll arbitrarily apply some stats for reference: Str 18, Dex 14, Con 19, Int 13, Wis 12, Cha 4. He's got a Passive Perception of 14 (adding Proficiency) and for good measure I think he should have a proficiency bonus on Wisdom and Constitution saves.

While reviewing all this it seems like I added enough "stuff" that after looking at adjusting the CR I think I need to bump it up a notch...possibly 2 (we'll see after I get a chance to throw it at a hapless party).

So I think I have my quick and dirty Nuckelavee ready:

Actions:
Multiattack: make 1 hoof and 1 claw attack or 2 claw attacks each round. He may breathe poison (below) as a subsitute for one of these attacks as well.
Hoof Stomp (+6 attack, 2D8+8 (17) damage and target knocked prone)
Claws (Reach 10 feet; +6 attack, each claw deals 3D6+5 (15) damage; if both claws hit the same target, deal an extra 2D8 (9) rending damage.)
Horrifying Visage (this effect happens as a free action when a target first views the nuckalavee.  Affects each non-undead creature in a 60 foot radius; save DC 15 or become frightened for one minute; make a save each round with disadvantage if the nuckalavee is visible to frightened target; successful save means target is immune for 24 hours).
Poison Breathe Cloud (Recharge 5, 6; 30 foot radius; DC 15 Con save vs, poison or take 3D8 (13) poison damage and become poisoned (Save DC 15 each round; one successful save ends).

Not bad.....faster than the long-form stat block process, anyway. And dramatically quicker to work up a functional statblock than the old Pathfinder days. I admit I don't grokk the hit points of a CR 6 creature like this....doesn't this mean the nuckelavee effectively has around 19D8+72 hit points? That's.....a lot....of hit points. But the CR breakdown they provide assumes a single creature of CR level as given is going to provide a tough fight for a full party of adventurers.....so I guess I can see it. 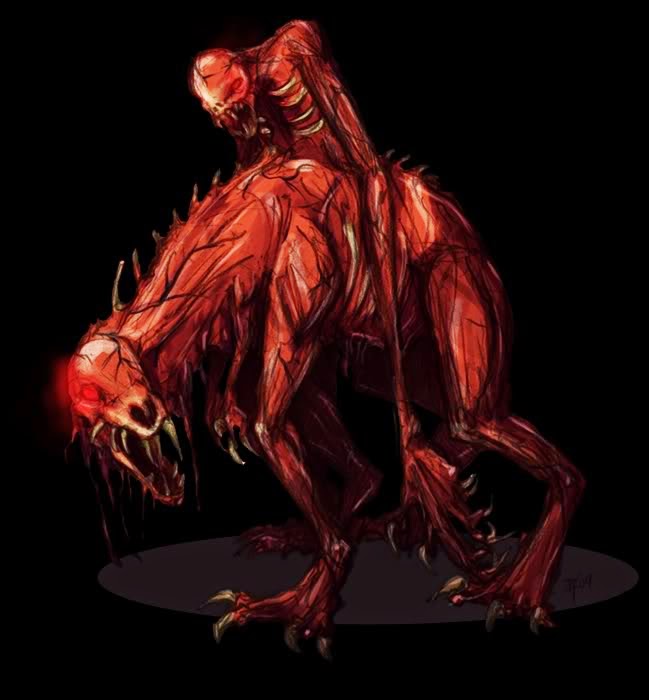