While you are battening down the hatches, applying fire retardant gel to the hous exterior and reinforcing the bullet-proof plating on the roof in anticipation of Xmas, I just wanted to point out that dndclassics.com has stealthily released Gary Gygax's original World of Greyhawk setting in PDF.

I snagged it....this was one of the few 1st edition books I never secured a copy of back in the day when the game was new and I was young, and its a good scan, and the maps look great. It's fun to take a look at the first officially published setting for AD&D, glorious warts and all. You know you're dealing with an old school setting when the first three things you learn about the world, in order, are its place in the heavens, the seasons of Oerth, and the types of trees that like to grow around here. Try starting off a contemporary setting tome with that info, you'll have all the youthful tablet jockeys hitting "delete" so hard their screen shatters! (/hyperbole)

Seriously though, it's a cool PDF collection of the two books plus maps. You'll find a brief but inspirational overview of the world that virtually all 1st edition modules appeared in until the Forgotten Realms smashed its way onto the scene a few years later. You get the run-down of the world's gods, notable locales, politics, dungeons, stats to kill the gods, encounter tables, great hex maps, a key to where all the modules take place and in what hexes specifically, and it all smacks of that weird, quasi-amateur style that permeated TSR until around 1982-83 when it started to get too big for its britches. 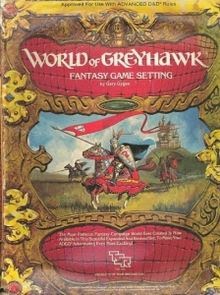 Posted by Doctor Futurity at 2:32 PM