Wednesday Blaaaaaaagaggghhhh! Rage: The Scorchers, Goblinworks Begs for your Money and more

This is one of those "filler" blogs to keep up with my personal quota, so no cool game articles, no controversial off-the-rails rants (unless it just happens, heh) and only a little bit of news. First off:

Rage gets "The Scorchers DLC

So id, now owned by Bethesda, has been quietly trying to get more DLC ready for release for Rage, a beautiful looking game with some very, very tight shooting mechanics strapped to the rotting skeleton of a Fallout 3 wannabe environment, with some "so-so kinda okay but not really" driving events tied to it. I downloaded it last night, but it essentially tacks on a new campaign and opens the game up for some modest open-world post-endgame continued gameplay. I somehow still haven't gotten to the end of this game, so I have no idea how that meshes, but the existence of this DLC smacks of Bethesdian influence on id, and also suggests that a future Doom 4 might look less like the conventional style of shooter that id has refined to the point where it is methodically by the numbers and may instead have a dash of Fallout and Skyrim mixed in. Hopefully more than a dash...either way, imagine a Doom 4 which provides for the open-world environment of Fallout....hmmm. It could be cool, but I admit, I'm suddenly having a hard time imagining Doom in an open world environment. Maybe Quake, yeah, but Doom....? Naaah.

The Goblinworks Kickstarter Round Two is still going and just under halfway through with less than half its goal of One Million Dollars. Lots of discussion about this on rpg. net, but I have to say, the more Ryan Dancey discusses the Pathfinder Online plan the less I care about it. I'm not a hardcore PvPer (despite what my wife's Rift guild thinks....they are constantly making me PvP on my Bahmi rogue to earn their guild quest goals) and in fact have found every conceivable description of the old days of Ultima Online or more recent games like EVE to be unpleasant, to say the least. Call me a carebear if you like, but unless hardcore PvP comes with hardcore consequences (i.e. when you die your character is permanently deleted and you are kicked from your account permanently) then we'll never have a game environment which can even come close to creating the sort of immersion and visceral sense of realism that I feel such an element could otherwise achieve. Then again, the hardcore PvP crowd that likes this sort of thing could care less for immersion, so I may be missing the point of what games like Pathfinder Online, Darkfall, EVE and others are trying to achieve, anyway. Which still makes me "not a part of their target demographic" despite the fact that I would love to play a Pathfinder MMO that...you know...actually felt like Pathfinder the RPG that I've enjoyed for a few years now. But what I play at the table bears not even a glimmer of similarity to what Ryan Dancey is describing in his discussion of this game.

Either way, the current MMO kickstarter keeps heaping the promise of book content for money. It seems that motivation and interest in the MMO alone is not enough to motivate donations. Still, it is about halfway there...almost...and has several weeks to go.

I'm playing through the Chris Redfield campaign now, and making good progress since I set the game to "casual" mode. The description of casual mode is basically, "You just want to enjoy the ride." The game suddenly got fantastically more fun and engaging without the stress. I am now remorseful that I didn't play the Leon Kennedy campaign on casual mode, because I suspect my aggravation with it would have been considerably less. Anyway, a proper review of the second campaign soon!

As an aside, RE 6 for the PC is slated for March 22nd next year. As an aside, the earlier RE game from this year, Resident Evil: Operation Raccoon City, recently got its DLC released for PC as well, and has been showing up discounted in various areas. Despite assertions by some that it wasn't that great (expectations will influence this view) I found the game to be quite enjoyable. Then again, I rather liked the idea of playing as a squad of Umbrella mercenary black ops agents, and also expected the game to be exactly what it was: a co-op themed riff off of the Left 4 Dead subgenre. As a result, I've actually enjoyed RE:ORC more for its game play than RE6, because RE:ORC at least handles third-person action smoothly (and better on PC, I should note) than RE6 does (at least until I flipped the casual switch on). 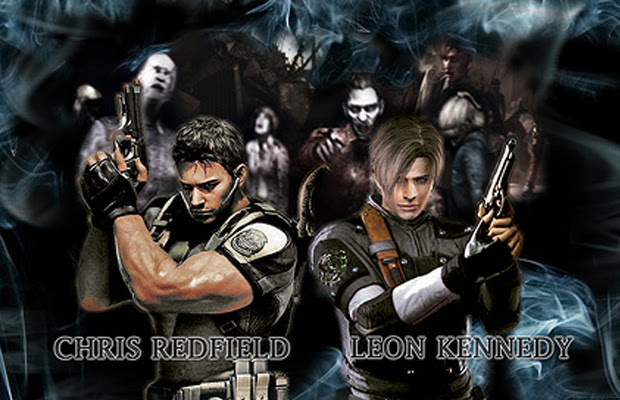