It's been a hellish week and a half now for my poor wife, who started December with a bad case of strep throat, and has since been to urgent care and then the ER multiple times. She's in general care at the hospital now under monitor, as the infection simply kept getting worse and worse. She looks like she may be on recovery now, but it was scary for a while there.

Aside from that, I thought I'd share this really interesting assessment of the gaming industry for 2012 from the Mongoose point of view located here. Matthew Sprange seems to be sticking a fork (mostly) in the print RPG industry. Not totally done....POD and electronic seems to be Mongoose's expectations for the future, so it sounds like they are joining Steve Jackson Games to some degree in the camp of "companies who have decided the time, cost and effort to figure out how to expand the hobby is too much effort" and instead will now focus on their shrinking base. At least, that's how I'm reading it. 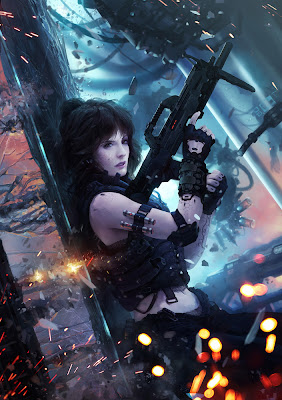 On the one hand I think this is probably a pretty accurate perspective. Matt mentions an unnamed publisher who's sales matched one of the bigger guys. If the unnamed fellow is Mr. Goodman and the game is Dungeon Crawl Classics (which did indeed get some high sales marks) recently, and the competitor is D&D 4E, then I could see those numbers. If he'd have named them, and they were....say....Barbarians of Lemuria vs. Pathfinder, then I'd have been shocked and worried.

One thing he also mentions is the contraction and disappearance of hobby shops (or was that only discussed in the other forum section talking about the State of the Mongoose? Ah well, will check later). This, I think, is probably something publishers need to consider: they can get "the hardcore crowd" online, a handful of guaranteed sales, no problem....or they can have a meaningful venue to expand the audience from, but without physical locations for a traditionally very hands-on, physical hobby they're not going to get it. And unfortunately the hardcore base for RPGs is fairly enamored with PDFs as a medium, and generally somewhat asocial, so the concept of "face time" with a broader public that is already getting a ton of face time from other media is anathema.

In short: I wonder if the hobby's contraction is because its core is too out of touch with the idea of how to go about publicizing and grabbing a share of the larger, fresher crowd of non-RPGers (I say "non RPGers" because there are more gamers now than ever; just most of them aren't playing tabletop RPGs anymore).

Then again, maybe its inevitable....in the world of fiction as entertainment, we've been stretched pretty thin, and its just possible that only the very specialized crowd of gamers who like tabletop RPGs can keep it going in the face of much flashier and more accessible entertainment media like video games, which strike me as the top dog in terms of siphoning off potential new players. In 1980 when I started playing the video game competition was the TSR-80 and the Atari 2600. Today it's WoW, Rift, and Skyrim, which offer some remarkably compelling experiences with zero hassle.

Anyway, something to think about.

There are two additional thoughts I had on this subject.

First: I still wonder just how much of the print and even PDF share of the tabletop RPG market is reduced by PDF piracy. I still feel that the single greatest factor in the devaluing of RPGs boils down to the rampant and pervasive tendency for gamers to grab something to check it out for free. This is probably related to the issue of shovelware, and how the RPG hobby also has been known, in the past, to dump torrential levels of cheap and easy splatbooks and other products on the market that we might have been willing to buy in ages past "just because" but for which there simply is no longer any disposable income to toss toward now.

Second: this isn't meant as a knock on Mongoose, but I also have to wonder to what extent Mongoose Publishing's own perspective isn't skewed by the simple fact that too many years of known problems has left their reputation damaged over time, such that their dedicated fan base has contracted out of a lack of trust. I still believe in Mongoose and will support them on the Traveller books I want, and anything Legend of course (but see below)....but my FLGS won't even stock their games anymore because of the reputation from years past involving editing and printing issues; people just don't but the stuff they sell around here, basically (except Traveller, and even that has diminished). So I sometimes wonder if Mongoose's reputation doesn't make it look just a bit worse off than it might otherwise be.

On Legend...even as I read about their "Cities" plans, for example, I know, from seing Skaar, City of Orcs, that they are probably just looking to retool old minimal-quality D20 era books for Legend. Most of the Legend releases are just reprinted/reformatted Runequest MRQ books so far, too (and not even edited beyond the basics, judging from books like Pirates of Legend that have errors/omissions that go back to the original RQ version still intact for legend). And the Monsters of Legend missing traits gap, for example. I mean, Mongoose might be looking at a core base that is (like me) willing to overlook all of these issues for the good meat of their games. I think a larger body of tabletop gamers are not so willing to accept so many editing and quality control issues these days, and when Mongoose's reputation for more than six years now has been synonymous with "poor editing and high errata" among almost every gamer I know, that's got to have an effect on their sales over time.

Posted by Doctor Futurity at 7:40 AM