The Fearsome Four Get the 3.5 Treatment

So as I continue to have fun with the new AD&D and 3.5 D&D reprints I took a bit of time to translate the Fearsome Four into 3rd edition. It was a fun exercise, and also interesting to really be reminded of the subtle but distinct differences between straight-up 3.5 and Pathfinder. The AD&D versions are right here. For now, though: the 3.5 edition versions!

Corlance dan Veraskon, a human knight of the southern Octzellan kingdom of Valance. He was formerly of the Order of the Southern Crescent out of Pheralin, but left on a journey to earn his title of true knight (dan) as a knight errant, aiding the poor and needy. Corlance chose the most difficult and demanding task imaginable, in the name of his goddess Enki: the forsaken lands of Golmadras. Aware that his survival in that land depends on a measure of will and trickery, he has arrived anticipating the need to be discreet about his identity. Not long after arriving he was nearly killed by a rabble of drunken templars in the service of the Shadow Temple but was saved by the timely intervention of Syberis Darkmoon and her short ally Quentin Chance. He later made friends with lacuna Helbyrn, who he attempted (and succeeded) in beating at a drinking contest, earning a mild amount of admiration from her at his tenacity. The four have been traveling since, and Corlance plans to see the ruins of Thystivianen next (naga and lamia be damned).

Syberis Darkmoon is an ashtarth (drow) dark elf  and the youngest daughter of house Plagistron, though she does not advertise this. House Plagistron is a ruling figure in the northern city of Senempar, but she fled from that dominion years ago after an altercation that led to a call for her execution. She has since made her home in Golmadras, where a dark elf on the surface is a common sight. She provides guidance to foreigners  visiting the land to help them avoid coming into conflict with the oft-times draconian local laws. She is also a remarkably good fence and pickpocket.

Quentin Chance is a sylenic Halfling of the South Shores (fighter/thief, CG) and a bold adventurer by the standards of his people. Quentin had a profound experience on his fortieth birthday when a gypsy woman of the Avernan Nomads read his fortune and proclaimed that he would die in the comfort of his own home, unexpectedly. He decided to thwart death by marching off into adventure, to become a roaming nomad of sorts (counter-logical thinking being common among the Chance family) and has prided himself on his adventures ever since. He took a liking to Corlance when he first met the knight, and has followed him ever since as a loyal companion. 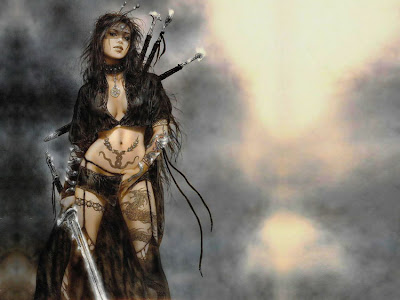 Lakuna Helbyrn is a human woman in her late twenties and a former Royal Guardsman of the Imperial Court in Golmadras who once went by the name Aerys Daion. She was cast out after an altercation that led to the death of her commanding officer, but for reasons unknown the Emperor himself intervened in what was ordinarily a death sentence, instead stripping her of name, rank and status and putting her on the streets. Lakuna adopted the name of the legendary warrior woman who was written about at length by the historians during the fabled War of Strife in old Imperial Hyrkania, for her prowess at laying low a balor summoned by the old armies of chaos, and she claims that her ancestry can be traced back to that very warrior so long ago. In any case, she encountered Quentin and became good friends with the scamp, reluctantly agreeing to assist his new friend Corlance in an exploratory journey of Golmadras under her assumed identity.