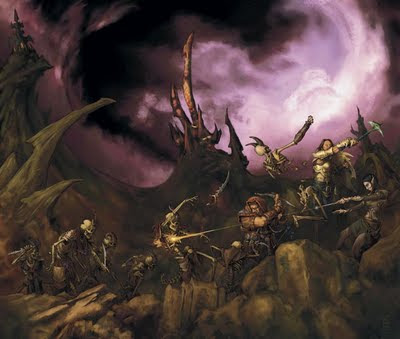 I've picked up the reprints of the D&D 3.5 core rule books. They seem to be reprints of the deluxe editions (the black & silver foil cover editions) that came out many years ago...but I never actually owned those so I can't really say for sure if this is the case or not. Its possible these contain errata that postdates those editions, but I'm unable to say for sure.

It's interesting to look at these books again after having been playing Pathfinder so much for the last couple of years. There's a few interesting bits I had noticed which had not previously been so obvious (especially since I haven't look at a copy of 3.5 anything now in about four years). Among these observations:

1. The Pathfinder art seems to be generally better. I guess I'm not a huge fan of Todd Lockwood's style, more correctly. I like a lot of the art in 3.5, but the Pathfinder take seems more modern. I think Pathfinder is a byproduct of the more graphically-intensive current era of game design, whereas 3rd edition was spiralling out of the late 90's and early 00's, a time when it was still possible for a top-tier publisher to use black and white art on occasion.

2. The 3.5 font is bigger than Pathfinder's font. As a middle-aged gamer with vision issues I genuinely appreciate this.

3. The layout on the Monster Manual looks kinda crazy and heavily condensed compared to the Pathfinder Bestiaries. I am surprised to read it and realize that (among other things) the word count per entry in the 3.5 MM doesn't appear to be all that different than the 4E MM, which is ironic considering how much flak was leveled at the lack of monster fluff in 4E's presentation. For whatever reason I don't remember 3rd edition getting the same accusations. Pathfinder by contrast definitely tries to add at least a few extra sentences of fluffy goodness into each monster's description.

4. One thing the 3.5 MM seems to do better than the PF Bestiary is to provide more extensive stat blocks and variant details. Pathfinder has a bad habit of adding a bit at the end of a monster with variants and saying, "do this if you want to have variant X." The 3.5 MM simply gives those extra stat blocks to you ready for use.

5. After playing with Pathfinder's rules changes for roughly four campaigns now (each ending around level 10-15) I think I can safely say that something is weirdly off about Pathfinder math in terms of power scaling. PCs are clearly more effective on average than is implied by the level scaling advice in Pathfinder. Looking back at 3.5 now reminds me of some of the reasons why. 3rd edition PCs had fewer skill ranks, no "bonus features" for favored class (favored class being a way of penalizing characters that dabbled in a weird range of multi-class options) and of course hit points scaled a bit on the lower side (though this is fairly minor). Feats, too. You get a lot more of them in Pathfinder....and many of those feats have been enhanced or made more effective (i.e. cleave, power attack and so forth).

6. The DMG for 3.5 still stands out to me as providing more generally useful content and advice. The Gamemastery Guide is alright, and has some nice bits, but it's never really filled in as handily as the 3.5 DMG did, which carried on reasonably well from the expectations established long ago by the 1st edition DMG as an all-purpose toolkit full of cool stuff to build from.

7. I had forgotten that the whole concept of swift actions was a late-game introduction to 3.5, and does not exist as a concept in the core rulebook.

8. I think the Pathfinder book is very well presented and has a lot of interesting presentation and dialogue, but I have to say, the 3.5 rules are very clear in their presentation and succinct in explaining the game mechanics (with a few very infamous exceptions, such as with grapple).

9. If I ever get to run 3.5 again, I'll run skills by-the-book. Lengthy runs of Pathfinder have convinced me that the skill and rank expressions in PF make for some fairly over-talented and over-the-top characters. However, should I run 3.5 again I would be more rigorous in insuring PCs are recognizing skill synergies, something I think I was fairly lax about back in the day. As it stands,  I have learned over the years that I prefer more detailed and robust skill systems over streamlined and simplified. 3.5's still nowhere near GURPS-level in terms of depth, but it stands out as the most elaborate skill system in D&D's development. Proficiencies from 1/2E had broader skill selections, but with simpler math....both approaches have merit. However, 4E's easy-button skill system and Pathfinder's "everyone is either a freakin' master or they suck horribly" approach have ultimately both worn thin on me over time. I will, however, expel any player in my group who blathers on about optimizing skills and how players should be discouraged from choosing role-play skills over utilitarian skills. Those guys don't need to be in my game.

10. The 3.5 rules have a lot of bits I (and apparently many others) had forgotten about. How often have DMs let players level up and cross-class into something without requiring some background to justify the change, or a training cost in time and money? Seriously, I had forgotten about this bit on page 197 of the DMG, but if I want to slow down the pace of a campaign a bit, requiring training between levels is a clever way to do it. Add in the advice on page 198 about time to learn spells, the requirement of sorcerers to petition powerful entities for spells, and you've got a combination of "slower pacing" mixed with story elements that make progression more tangible in play.

11. If you're one of those people who freaks out about druids and their pets being overwhelming to fighters (a subject for another time) then let the fighter get special cohorts of his own.

Okay....that's it for one day's reading and review. I really would like to run another 3.5 campaign straight up to see how it feels compared to all the Pathfinder I've been running, but that may be a hard sell as my local groups are all heavily invested in Pathfinder. Paizo definitely pulled off one amazing stunt with Pathfinder: a lot of people I know who disliked 3.5 or were scared away from it will play Pathfinder, despite the fact that the two games are effectively twins, with only minor differences. I've always been impressed that he D20 system is like some sort of invasive parasite which can sustain itself so well simply by migrating to a different host... 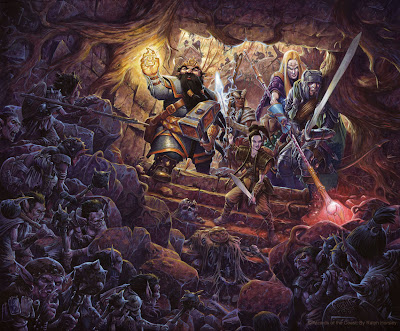 Posted by Doctor Futurity at 2:58 AM