No column, article or game content today...hopefully by this weekend I will have some time to sit down and write a new series of articles that tie into the existing projects, including the Golmadras articles for AD&D and the Sarvaelen series for Legend/RQ/BRP. I might even try to do some new material for Chirak, or post up some existing content I've had lurking about.

This weekend I had a couple modest milestones in the world of video gaming: two single-player campaigns I had been slowly working on over many months (a few minutes here and there) at last concluded: Quake 4 (one of the last of the "old school" shooters or one of the first of the new school, depending on how you look at it) and Modern Warfare 3.

This was my second play through on Quake 4 (the first was back on the 360 when it first came out). I think I enjoyed it more now, but it was interesting seeing how the game has aged, and also how id's old school shooter design still resonates. It was funny playing a game again with health and armor counters, healing through health kits and armor pieces, and a metric ton of ammunition randomly scattered about. I don't know whether finding a health kit in the heart of an alien empire or a regenerating health meter is less realistic anymore....with shooters, you sorta go with whatever your audience will ignore for the sake of a good time, I guess.

I know it's a bit late to talk Modern Warfare 3, but I have to say that I can't tell if the MW3 single player campaign was just unusually lackluster or if the Call of Duty formula (it's very, very formulaic) is starting to wear thin. I still enjoy the multiplayer (well, to be fair I enjoy the component of multiplayer that lets you play solo) and the black ops and survival missions are a lot of fun....but the resolution of Price's tale of endless vengeance against Makarov felt just a bit drawn out here. I look forward to a future Call of Duty from Infinity Ward that is not about Russians invading the US and Europe, or how the only guys in the world capable of surviving for three whole games are British Special Forces units gone rogue.

I mean, it seems to me that China or even the Middle East would be a better fit for a Modern Warfare title right about now...

I'll make a prediction, though: a future Call of Duty title will be highly futuristic, maybe even Mass Effect style futuristic, and will take place in Spaaaaace....! And I would be very happy if they did something like that, actually.

Either way, I had to finish MW3; after blowing through Spec Ops: The Line I sort of felt obligated to scrub the grime away with a clean, white-washed game. I admit, though, Price and his motives (even his allegorical name) looked a lot more suspicious in light of playing Spec Ops....


I picked up Mass Effect 3 for the PC over the weekend and am glad I did. I don't know why but the multiplayer experience is a more solid and generally better experience on the PC, and I am surprised to say that I am enjoying it more using a mouse/keyboard for controls than the Xbox controller (for whatever reason the Mass Effect series on PC doesn't allow for controller use). This is not the norm; usually third-person perspective titles are generally easier to manage with a controller, and tend to be optimized for the experience (I tried Spec Ops: The Line both ways, for example, and found it much easier to manage with the controller than the keyboard and mouse).

Anyway, having a lot of fun with that....more so even than with the conventional MMORPGs. I want do delve more deeply into Guild Wars 2, but I spent the weekend in a state of mind where playing MMOs started to feel draining. I played a fair amount, in short spurts....but a fair percentage of play time was really "standing motionless" as I'd get the boy to lay down for a nap, then go to play, find myself tired as well and go nap. Or he's wake up. Or it was time to cook. You name it. But I did get a few hours in on both.

Overall Guild Wars 2 is a more interesting and engaging experience but I was put off by the early release crowds. It's difficult to explain, but the short version is its possible to be in a public quest like, "Help the farmer walk over here" and have 120 people all escorting him at once while demolishing menacing spiders you can't even see on screen....so I decided to wait a while and play when the crowds thinned a bit.

I was about to run out of time on Rift and decided to play it a bit, see if I wanted to continue. I extended my time a month, and then sunk a fair amount of time into my Bahmi rogue. What I've noticed about Rift is it's a very rich game, lots to do, in a Wow-esque way, and the rift events and invasions add a special dynamic element to it. But after I hit my early level 20's (past the point at which the game is free to play for everyone) regular players get sparse. Moreover, the grindy element of questing gets noticeable when they keep sending you to roughly the same area over and over, which may be why a lot of people say they like all Rift has to offer, except for the soloing. The game can play like this for hours: find quest hub town, gather 3-5 quests in area, do those quests, come back and turn in, then get 3-5 more quests at the same hub for the same region. Over and over.

So I think I'll continue with Rift....but only because my slow pace on the game makes it less intolerable. It's a game I can play for 1-2 hours and feel satisfied about, but if I tried grinding it for a really long session I would find it tough to stay interested (or awake, judging from my efforts to do exactly that this weekend). In the meantime, I may play a lot more Guild Wars 2 soon, but I like that I can enjoy that game (with its buy-once-play-free model) forever and ever. WIll enjoy more GW2 just as soon as the new player mobs thin a bit and I can see what's happening on screen! 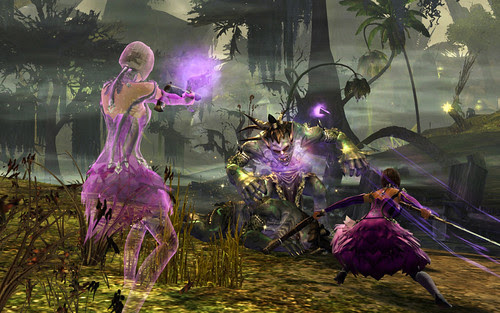