AD&D the First Part One: Bards, Psionics and Armor Adjustments 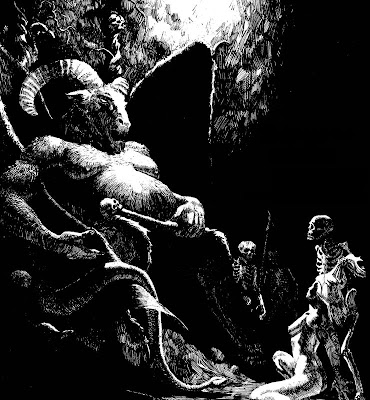 Welcome to the first article on my observations and musings on Advanced Dungeons & Dragons, spurred by my acquisition of the recent Premium editions, giving me the first real chance in years to read through these books again with the jaded eyes of an old gamer veteran, a far different experience I can safely say from what my childhood self experienced with these rules! It's sort of like being able to see out of only one eye and then suddenly one day you wake up and the other eye works, opening you up to the amazing world of depth perception.

I'm not going to be charitable and gushy toward the rules....I'm going to be straight forward about it. I feel a lot of people for reasons unknown to me have sort of enshrined Gary Gygax and his writings in a way that almost makes him like some sort of hobby saint. It's creepy, to be honest. But I think he did a tremendous amount of good for what he started, and while his actual rule set might be a strange and sometimes uncomfortable ride, it was all we had back in the day and I'm frankly impressed that the game even managed to come into existence in the first place.

I'm not bothering with Original D&D, because I don't own it anymore (I wish I did, for collectability alone), the version I do is Swords & Wizardry Complete, and I actually like S&W a lot chiefly because it manages to strain from the messy coagulant that was 0E something resembling a cool rules lite system that is eminently playable. Not that the working parts weren't there in the first place--obviously they were--but as a youth I found it easier to read B/X D&D in conjunction with AD&D to figure out how to play than I did trying to puzzle through the OD&D rules which I had bought after the fact (them being cheap at a local used bookshop in 1981ish). I wonder if they're still on the family ranch somewhere, with my old Arduin stuff, Thieve's Guild books, Dragon Tree Press publications, Judges Guild, and All the World's Monsters? I know I had it all at one point...and not a damn thing seems to have made it to 2012 in my possession. Sigh.

So first up, while reading through the Players Handbook I ran across lots of oddball bits that I find curious in light of today's gaming evolution. I'll try to contrast what I noticed today by what I remember from my attitude toward the same 30+ years ago. To begin...

Weapon Proficiencies and the Lack of Skills

This is old hat, nothing big, although I don't remember using them until later on (when I got more rules-savvy), chiefly because there was confusion in my youth about the weapon lists attached to classes and this other thing. So were fighters not actually proficient with all their weapons? Were they just proficient with weapons trained in? As a kid it was easier to ignore.

Today, with AD&D 2nd long dead and sorta buried, I know that the rules were intending for classes to show weapons permitted and proficiencies to be the rules for which of those weapons one was skilled in. Even today the list seems fairly limited; I liked how 2E introduced weapon groups to fix the issue....and of course 3E's feat system for proficiency.

It still surprises me that we didn't see non-weapon proficiencies until the Wilderness and Dungeon Survival Guides. The secondary skills chart in the DMG was the only nod to skills in AD&D with the core books. I know today that there's this thought in the OSR movement that skills are bad, for various reasons (discouraging puzzle-solving on the player's own merits, or confusing the process of player/DM negotiation, or not accounting properly for the broad ideal of what a class might know, and so forth) but back then as now the value of skills as features that could define a character who was above and beyond the scope of the player seemed like a good idea to me. I remember using various skill hacks for AD&D, T&T and other games after I discovered Runequest and later Dragonquest.

I think...when you're a kid, you're a lot closer to the era of "cowboys and indians" so the idea that you need something to help arbitrate when someone claims knowledge for a character that might not otherwise obviously have such comes up. "I'm a wizard, I study alchemy." Sure, prove it. Plus, if you apply the "new old school" approach that says that skills are crutches to real player interaction...well, I do wonder sometimes just how those games work these days. Maybe I'm too out of touch with the old guard to remember, but I know as a kid I often wanted to play characters that knew things I as a player never could. It was part of the charm of role playing. I think the same still can be said today. But...well, there's more about this later, when I discuss the DMG and some of Gary's philosophy on how the game plays and what the game is. 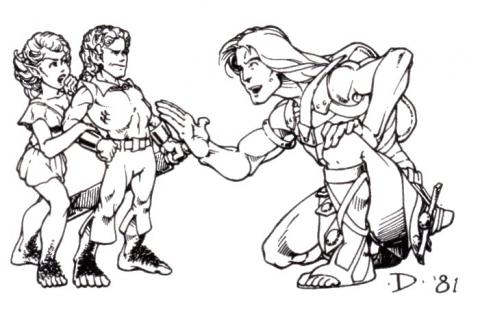 I love this chart now, and if I get a chance to run 1st edition I plan to do so RAW with all rules turned on, including weapon adjustments by armor class, because it seems so ridiculously specific and appropriate. Now, that is! Back then I thought this chart was a pain in the ass and designed specifically to screw people up. I know why, too. The chart is using AC as defined by specific armor types....but if you wrote down armor with your DEX adjustment factored in, or with magical modifiers, then technically it would muck up the chart, right? And that meant a lot of look-up/book-keeping/adjustment for what averaged at most to be a 5-10% payout. It was easier to decide it was all a wash and move on.

I did the same with Speed Factors back then, although I used their revised version religiously in 2nd edition. I'd use speed factors now, RAW, except for one problem: they're basically tie-breakers in combat....he who has the smaller, quicker weapon hits first. This is ironic, because Runequest does it the opposite way, with bigger weapons getting the extra reach necessary to pull off an attack when the opponent with shorter reach closes. Ironically Runequest was allegedly based on some rough eyeballed empirical data gathered from SCA events, so presumably they noticed that having a bigger reach provided a consistent advantage. Not sure if it's all a matter of interpretation (i.e. AD&D based the rule on similar but differently interpreted data from mock fights) or if AD&D's rules were more of a "wargamer armchair resolution" rule. I suspect the latter.

Ah, the first prestige class well before its time. I don't object to the bard, except for the fact that the requisites leave many questions vague. So you need to have 5 levels of fighter...easy enough. Then you take a level in thief. Are you taking thief because you're destiny is bard, thus you are choosing an arbitrary range of class levels? Are you really dual-classing? How does a half-elf qualify, since he can't dual-class? Does that mean a multi-classed half elf can qualify?

Back then I was so confused about the bard I simply never used it....which was easy since no one would likely ever qualify anyway, even if you assumed the laxest interpretation on the requisites. Today, I think the bard is best looked at as being a class that simply dictates it's first 5 or so levels are fighter, and then at least 1 but no more than 3 levels are thief, after which you gain the first level in bard. So long as you meet the bard requirements, its not the same (not entirely) as dual-classing. And half-elves can do this because it says so.

I'd allow this bard into a 1E game today, but I gotta admit, the bard (especially after the Complete Bard book) in 2nd edition was a fantastic revision, a dramatic improvement in play and accessibility over its 1E version.

Back in the day psionics were just a weird rare option that was interesting but for which the chance of seeing in play was snivellingly tiny. It really served as a warning marker, to be honest; if you met a guy who had a portfolio of characters, of which 80% had psionics, then you knew he was a munchkin and a cheat, plain and simple. I didn't ever see actual psionics in play until 2nd edition....and those of us who played a lot of 2E may remember the mixed feelings and many issues about the revised psionics rules. My favorite iteration is what came later in Skills & Powers, which benefited from hindsight.

But you know what I am amazed about today is how while writing the Players Handbook neither Gary nor anyone else thought it would be interesting to turn the psionic rules into a viable class option. It would have been trivial to do so, and I am thinking about writing up what that class would look like now. Makes me wonder if anyone ever tried that, or if an option for such ever saw print (such as in Dragon). My Dragon collection was full of holes, so its always possible, I imagine.

(EDIT: After a bit of creative searching I found it: the psionicist appears in Dragon #78)

Okay, enough for today....more next time! Including the Straw Balrog Premise and the curious nature of what is worth XP and what is considered fun. Also, the reason insanity charts show up in every Palladium game, possibly revealed?