Cool Blog and Other Stray Bits

To keep up with my Monday-Wednesday-Friday regimen, I present...another post!

First off, go check out How to Succeed in RPGs or Die Trying by S.P.. I really like what he does there, it's full of useful stuff and inspires me to do more like it. He's also pushing out monsters you can use with 4E or Gamma World, which is pretty danged cool.

On the computer gaming front I have been playing lots of Rift, which is a weird way of responding to how much I liked Guild Wars 2.....you'd think I'd be playing more of that, right? The problem remains that GW2 is what everyone is playing right now, so the crowded mobs charging around from heart to heart have been crazy, especially for someone like myself who has an aversion to digital mobs. But you know, Mists of Pandaria just arrived, so maybe they'll go back home and I can enjoy GW2 more as a result. I have a serious aversion to the new World of Warcraft race: the pandaren look suspiciously like fat furrier cosplayers to me, and I loathe cutsey anthropomorphized things of all sorts, so this expansion effectively killed my interest in ever returning to WoW. They'll need to have the Lich King himself show up on Pandaria and slaughter every last one of the furries before I'll set foot on Azeroth again...

Anyway, Rift is pretty cool in its own right. I am planning to buy their deluxe expansion deal, which gets you the Storm Legion expack with a year's gameplay and some goodies. It's nice to be committed to a game again, to have one I'm happy with. Rift has many dynamic features that are just interesting to experience; it's gimmick, the perpetual battle against the invading elemental forces which try to blast their way into reality through Rift gates, is endlessly fascinating to me. The storyline's not half bad, either, and I like the look and feel of the game. I'm such a slow leveler though that it's hard to imagine I'll make level 50 by the time the expansion releases November...13th? I think that's when it hits. That's about seven weeks away. I have a level 26 human warrior and a level 24 Bahmi (half giant) rogue....I'd have to level each of them 3 levels a week, roughly, to make the level cap before then. That's assuming I ignore all my alts in the process. It seems like I can manage 1 to 1.5 levels for every 2-3 hours or so of gameplay. Assuming I can pull off 30 hours of game time in seven weeks....hmmm yeah, not gonna happen.

It's fun browsing all the blogs out there dedicated to MMOs. I get the feeling that to really play an MMO properly you need to sink 40-50 hours a week into these things. Not a month....a week. I once ran with a group in WoW that chastised me for playing only 20 hours a week a few years ago (at a time when I was unmarried and childless, though my soon-to-be-wife was also playing WoW at the pace of a full-time job). I was told that anything less than 30 hours a week was considered "casual" and I would never pass muster for the endgame. Well, showed them! I never even made level cap, let alone bother with the endgame.

Anyway, the MMO scene has already hit the one-month mark, if even that, in Guild Wars 2 and are already complaining about the game. Really, people? Doesn't anybody work anymore? I know a lot of kids play these games, but even kids have responsibilities outside of the internet, right?

I get the feeling that there's a huge schism between what one might consider a reasonable amount of time to focus on hobbies (i.e. MMOs) and what's actually being funneled into those MMOs. Maybe not a lot of MMOers have kids, or are trust fund babies, or have no lives outside of gaming? I'd say my wife and I have fairly bland lives outside of raising our son and gaming and the idea of devoting full time hours to a game every week endlessly for months at a time strikes me as bordering on maniacal and obsessive.*

Anyhoo! This is old, well-trod ground and other people who have been through the culture of gaming addiction have written far more interesting stuff about it than I ever could.

So my weekend downard spiral into dismal discontent with life has already improved with the return of my wife and child from their two week vacation. Yay! My kid has 4 teeth and a fifth on the way. He's standing up from sitting on his own, and can walk--carefully--if he's holding my hand. He's making noises that sound less like a baby and more like a little boy. It's amazingly cool to watch him develop.

Either way tonight's our third wedding anniversary so no game for Wednesday, that shall resume next week. And yesterday was my son's ten-month milestone! Poor little guy came home with a cold, but he's holding up well. My wife is worried about it, as she came back from vacationing in an area with a West Nile Virus scare. She's going to call the pediatrician today for advice to help calm her, hopefully.

This Saturday my bi-weekly group is going to go retro with a 1E AD&D retro excursion. Next week my Wednesday group will resume one of its many Pathfinder games. I'm not that satisfied with Pathfinder, I think the system is a bit over-powered, but I don't run games for the system anymore, I do it for the camaraderie, the story telling, and the adventures. Good stuff.

*Maniacal and Obsessive were two traits that fit my wife's MMO obsession prior to the arrival of our child. She still makes a good show for it, but only fractionally that of pre-mom-era. Speaking of which, not that anyone ever looks at my Raptr card, but I actually haven't been playing Fallout 3 (well, maybe a couple hours) or even Dead Island. I was annoyed that two of my favorite games showed no hours logged and wanted to reflect that I actually had sunk a ridiculous level of play time into both, pre Raptr...well, not so much Dead Island (just a fews hours missing) but definitely Fallout 3, a game I have played more than any other except friggin' World of Warcraft, and continue to load up and play for an occasional hour or two every couple of weeks, just to see what else I can find in the wasteland; I have 74 hours on one character (I've played four characters in Fallout 3 now) and still haven't done two of the DLC packs on him, or found 20-odd locations that remain unexplored. Admittedly, he's like some sort of walking post-apocalyptic god with his winterized T51B power armor, his rail cannon and his seemingly bottomless gatling laser....not to mention his trusty supermutant sidekick and dog....but its still fun to wander around getting into scraps and finding entire chunks of game I've never seen before....

Anmyway, Raptr lets you do manual adjustments, but for some reason shows these hours as current playtime. Meh.....I just want the petty distinction of demonstrating my dedicated 200-odd hours in Fallout-Land. 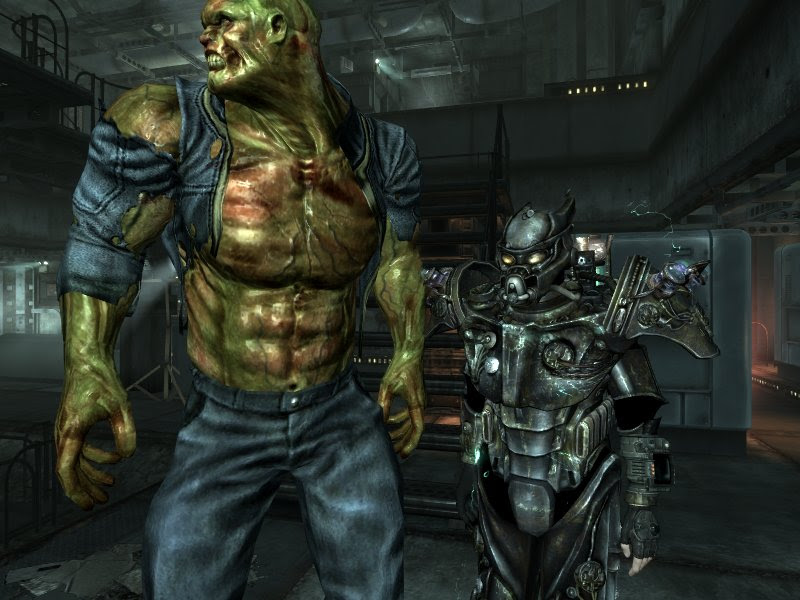 Oh, and FYI don't try searching for "streaking through Fallout 3" in google. At least, not at work.
Posted by Doctor Futurity at 7:00 AM