On The Masks of Nyarlathotep and other Gigantic Campaigns 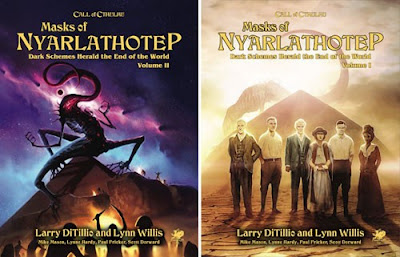 I am just now diving in to this, having picked it up --like-- an hour ago, but just wanted to comment that this is a monster of a tome. Like...huge. Two massive volumes of campaign plus a folio of what looks like more than a hundred glossy, full color hand outs and a custom Keeper's Screen.

I dream of running this campaign, but I also dream of having lots of free time, a prerequisite for the former, so who knows if I'll ever get to do more than read through it. Still, this is a really impressive looking tome, and some serious effort went in to making this the definitive edition of Masks of Nyarlathotep.

This seems to be a book that is part of a trend, though....is it just me, or is this an increasingly common thing? By thing, I mean the periodic and distinct manifestation of gigantic, immense, almost overwhelimgly large scenario books, featuring campaigns that test the memory of the GM, the attention span of the players, and the will of humanity to survive an experience longer than a Steven Erikson or Robert Jordan epic novel series.

Examples I have on my shelf include:

D&D's Waterdeep (Dragon Heist and Dungeon of the Mad Mage)

Traveller's Pirates of Drinax and The Great Rift

And now Call of Cthulhu's Masks of Nyarlathotep

I have others, but these all stand out by volume, weight, and sheer audacity.

So one thought I have is that some of this is a throwback to the old days of boxed campaign sets, but with the modern disposition toward excessive word count and minutiae in design. Where once a boxed set might have some handouts, maps, and three books usually of 32, 64 and maybe 96 or so pages, now we have multiple hard cover tomes and accessories, often totalling hundreds of dollars in cost. See Invisible Sun for a fine example.

Maybe some of this is spinning off from the dominion of board games? Board games often command significantly more money for a boxed set, then yet more for supplements....or maybe it's the manifestation of the Kickstarter, which often heaps a metric ton of additional goodies into the mix, leading to an escalation of content. Never mind that the books I list above were not purchased from Kickstarters, and I'm not even sure if they were Kickstarted....but it certainly could make sense.

In the end, I'm not really bitching (um, much), there remain plenty of shorter campaigns and modules for all such games. But....it's interesting seeing this trend toward expansive, elaborate and lengthy campaign scenario books, designed to take a great deal of time. I could argue that I wish I had the time to read and run these, but then I am reminded of an important fact: I have never really had this time to run such a monster of a module. Indeed, the last time I attempted (and even succeeded in doing so) was the much smaller and more focused (relatively speaking) Return to the Tomb of Horrors for AD&D 2nd edition, many many years ago.

The irony of this rant sounding like an old gamer complaining about new trends is not lost on me...ah well, plus ça change, plus c'est la même chose.
Posted by Doctor Futurity at 11:24 PM