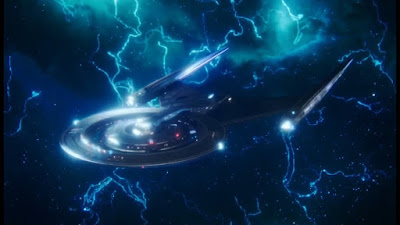 At long last I have had a chance to watch Star Trek: Discovery (season 1), having snagged a copy on blu-ray during Christmas. We're only about halfway through the first season so this isn't a review but if you've seen the series (or read the many articles on its interesting changes) then you have an idea that it's hard not to comment on this new series if you're an old Trek fan.

A disclaimer: I used to be a hard Star Trek fan with a copious volume of ancient Trek lore, and a library to accompany it. I have never been quite the fan you'll find on certain websites these days, but in my day I was pretty well versed in Trek canon, the novels, and the games. I had run a lengthy couple of campaigns using the Last Unicorn version of Star Trek, too.

That all ended around the time Star Trek: Nemesis came out. The sequence of events sort of works like this: DS9 was a good series, and in fact it may be the last TV show of old that I watched weekly as new episodes appeared. I was not a fan of Star Trek Voyager, which ever felt a bit "off" to me both tonally from what it had promised and also the finest example at that point of the "continuity problem" Trek has constantly faced: a growing body of canon with a zealous fandom protecting it. Voyager was the show's producers and writers of the time desperately trying to find a way to write Trek stories that didn't tread on the hundreds of episodes of other shows preceding it.

Star Trek: Nemesis was just so generally dark, unpleasant and brutal to its own subject (The TNG crew) that the movie all but killed my personal momentum of interest in Star Trek.

Enterprise was fun, and I did follow it, finding the show to be best when it tried to do its own thing and not wallow around in an effort to either adhere to or redefine Trek canon (The Xindi were a necessary addition, though too late to bring people back). And then we had the Kelvin Timeline movies, about which I have written more elsewhere and can say nothing other than that Star Trek Beyond was a pretty good movie, despite its two predecessors.

The thing though is that, for me, DS9's end was when I started to lose my tether (and interest) in keeping up with Star Trek canon. A lot of this growing dissatisfaction came from the byproduct of trying to run Star Trek RPGs with an effort at authenticity. It was possible, but honestly took more effort that it was worth. I played with a good crew who were not overly worried about the nuances of the Trek timeline and technology, but at the time it was something that bothered me enough to get it right, even if my players weren't that concerned about it. As a result, over time I grew increasingly irritated with this self obsession on the canon.

Between the end of DS9 and the inglorious fall of the movies with Nemesis in 2002 I eventually gave up on Star Trek  for RPGs and subsequently started to grow increasingly disinterested in keeping up with the books, and then even caring about the canon in general. I had better things to do with life, it turned out. Roll forward 18 years and I generally think of myself as someone who no longer worries too much about canon. Right? I'm above that.....right?

Enjoy it for the Timeline- It's a TV series like few others to attempt to create a timeline (and shared universe) over many decades. You can in theory line up and watch all Trek, ever, in consecutive historical order (barring any alternative universe stuff).

Enjoy it for the Science in the Science Fiction- Trek posits a future based on principles of science fiction roughly extended from the real science of each series' day, and then in later seasons tries to extend that continuity and update/expand on it. The show is known for its science advisors trying to get the jargon to sound plausible, to allow for a tether between actual science and the SF of the series.

Enjoy it for Roddenberry's Vision- for many, Gene Roddenberry defined a future universe in which a post-dystopian, post-war Federation rises up to bring its advanced society to space, and the conflicts which arise stem from the other alien races and interstellar powers that become parables and analogs for the contemporary issues of the real world. An interesting point of Roddenberry's future was the notion that human culture and civilization was "post-conflict," such that real conflict between the key characters was not the driver of the series; they were too civilized.

Enjoy it for the Universe Building- impossible not to, Star Trek has grown to represent centuries of future human history and a fictional galactic expanse in the quadrants of our galaxy. It's elaborate, deep, and sometimes contradictory....but part of the fun is seeing where those contradictions are eventually explained away and where they are not.

...There are, of course, plenty of other reasons one might like watching Trek, but the above four cover a majority of the elements people find most popular, especially those with insanely long Trek blogs and wikis.

The Timeline- least egregious, Discovery takes place 10 years before the first TOS episode, but posits a war with the klingons which for some fans is apparently annoying because they don't know why it wasn't mentioned in prior episodes from decades ago. There are also some other issues, not the least of which is the klingons, about which more below...

The Science in the SF- Discovery has instantaneous FTL drive which seems to stem from a galaxy-wide web of intergalactic subspace insects. It's a tricky gray area to argue that the SF physics behind Discovery's method of travel works within the established canon of the series, which had previously topped off FTL travel with the end of Voyager and an experimental ship which could dramatically travel faster than any other warp vessel. Also, the klingons (who seem to have changed species).

Roddenberry's Vision- ever since DS9 and the introduction of Section 31 there's been an assumption that the utopian future of Star Trek, even with the Federation, has a dark underbelly which of necessity must exist. Discovery is steeped in this core conceit, including an entire crew of has-beens and damaged goods who are all determined to win the war against the klingons at any cost. If you really dislike this part, you probably unhitched from post-Roddenberry Trek not long into DS9.

Universe Building- All Trek everywhere except for the Kelvin Timeline does this really well, and Discovery is no exception. The question of how the Discovery Trek universe fits in to the rest of Star Trek is the only question! For example: if this is the same universe as the rest of Trek, then Discovery must, in the course of upcoming seasons, reconcile the klingons it portrays with the klingons of every other Trek; it must explain why the instantaneous travel of Discovery is never again exploited (easy enough, to be fair; the "bugs" all die, or the Federation realizes the drive is exploiting an entire universe for its own gain); and there are "minor" continuity errors which will only bother you if you're an ardent, hardcore canonista to Trek (you may be one of these if you are bothered every time TOS is not reflected in its original 1960's glory in other more contemporary versions).

For me: I am not that worried about any of the above. This is a new, interesting Star Trek, and I want to see where Discovery goes, and I do not care if it ends up being an "alternate universe" or somehow is forced to shoehorn itself into some sort of mold to sate the wrath of the Trek canon police. If I have only one issue with the show, it is that the character of Michael Bernham is very messed up and in all honesty not the most sympathetic or relatable. I'm not done watching the series, but when I am I'll talk more about it....and whether I warm up to her. For me, my cypher within the show currently is Suru, who voices my concerns (and even when he apologizes to her --spoilers-- for not listening to her advice during his brief captaincy) that she's very carefully set up as a liability to the Discovery.

Maybe it's just that she had exactly the first two episodes to establish herself as the traitor and first mutineer in Starfleet. I guess I'll keep watching before I say more.

Anyway: as someone who was once a Trek canon cop, and then burned out badly on it, then got disenchanted with Trek during the Voyager era, then thought Nemesis staked in the heart, then hated the first two Abrams movies, I kinda like Star Trek Discovery so far, but I also like that I can think of this as a "new Trek" and not worry too much about whether it's supposed to fit in or not. It could technically "fit" but still be another parallel universe....don't care. This is a fun series, and doing something different and interesting.