The Slow and Subtle Cypher System Take Over 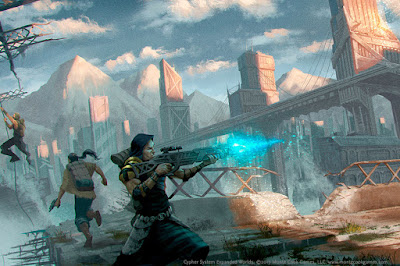 Last night we revamped (yet again) the Wednesday night game to introduce a Cypher System SF setting I had worked on.* The new setting's opening session was a bait-and-switch; I told everyone to build hard SF characters for an elaborate post-dystopian, post-cyberpunk future Los Angeles in 2231, an era when the world has recovered from World War III and a lengthy period of social and political decay to suddenly emerge as a more united, focused front for the future. The plot revolved around the player characters being participants in a well funded institute/think-tank on the cusp of developing the first superluminal warp drive system. The risk seems to manifest with possible espionage from competition interested in stealing the technology, or possibly terrorists destroying it.

Except....that wasn't it at all. Some of the PCs had disturbing dreams, or throughout the day of the momentous reveal see strange, ghostly images. Something odd is going on....but what?

The reveal came that night because despite sinking a lot of time into the verisimilitude of this 2231 Los Angeles setting the real setting is a transhuman distant future blend of space opera and Hard SF....the big reveal was that the PCs were all part of a strange simulation using nanotechnology and temporal "readings" that allowed a species of synthetic artificial beings to study the ancient history of the dead world of Earth which they had come to research. But it turns out humans do exist in this future, too.....but they had risen to a great interstellar power, and then collapsed for unknown reasons back to the stone age. The conflict between the humans of the Orion Alliance and the synthetics and their strange interests in the past is one facet of the game going forward, but by session's end all the players were left with lots of mysteries and direction (as well as freedom) to explore a completely enigmatic universe.

This kind of setting is hard to do with certain other generic games. The mechanical simplicity and elegance of Cypher System allowed me to focus on the plot, story, encounters and other details without stopping to spend hours meticulously statting out NPCs. Need a stat for the security guard? Level 3 dude with a  gun. This is hard to do in games like GURPS or Hero. BRP is a bit easier, and Savage Worlds the easiest, but ultimately they still require a bit of time to either find a pregenerated stat block or work out some mechanical details. Some GMs could argue that this can be done on the fly, and that even if you're winging it that's not an issue so long as it's not visible to the players....but if that's the case, then why not look to a system which actively provides you, the GM, with a core conceit in the mechanics designed to let you provide an actual on-the-fly stat assignment? That's what Cypher System does.

Moreover, Cypher System's toolbox approach to multigenre gaming, combined with its total cross-compatibility with the other games in the genre (Numenera, The Strange, Vurt, Predation, Gods of the Fall, etc.) means you can borrow and lift pieces from other Cypher settings to suit to taste. You can do this with other systems, sure....but the very design of each setting for Cypher allows for cross-pollination of content and ideas. Only Savage Worlds, in my experience, handles this approach with equal efficiency.

The need for players to have more mechanical interest and depth is also satisfied by Cypher System without causing any issues for the GM; it's like two different game systems that provide input back and forth through a little black box; the GM experience is decidedly different from the player experience, and somehow it all works beautifully. Players who want mechanical depth can find enough in Cypher System. If you're the kind who wants lots of choices, Cypher has it. If you want to experiment with your own thing, there are plenty of rules for going your own path. The core variation in character options is sufficiently exotic that you can choose from a wide array of unique concepts that are defined through the focus/type/descriptor options. For what I (and my players) need, this game is quiet genius.

This is a long, roundabout way of saying that the biggest problem I face today is playing another game (like Fantasy AGE) and realizing that Cypher could do what I want, better....or even D&D for that matter (I have come to the conclusion that Fantasy AGE is a lot like playing a very badly balanced, underwhelming D&D variant). Sometimes I want a game to let me explore what it has to offer, sure....but rare is the game that simultaneously lets me explore what it has to offer while robustly supporting my own vision of weirdness with a complete toolset. Cypher is all about that, and frankly just what I need in 2019.

I've ordered more cards from Monte Cook Games (I like the cards the game offers), specifically the Ruin Deck which uses content from the Jade Colossus book, one of my favorite "dungeon design" books for weird fantasy-SF mashups now (and who knows, maybe I'll actually use it for Numenera this year, too). With three active Cypher Games going now (superhero, far future SF/interstellar collapse and fantasy/SF hybrid settings) I think the only other games I really feel the need to spend time with right now are Call of Cthulhu and eventually D&D after I am satisfied with my break from the old grand daddy of gaming.

*Wednesdays have been in flux due to work, and as a result I've thrown out attempts to do Starfinder, D&D 5E, Swords & Wizardry, and probably others I can't remember, but none of them have grabbed my interest like I wanted, chiefly because all three are firmly rooted in well-trod territory that I am frankly burned out on. And Starfinder is cool, but trapped in Pathfinder rules, even if they are streamlined a bit....playing Starfinder just makes me think of ways to use the setting with Cypher System, a game that could actually let that universe open up to its possibilities, rather than the procedurally dull Pathfinder rules.
Posted by Doctor Futurity at 12:15 PM