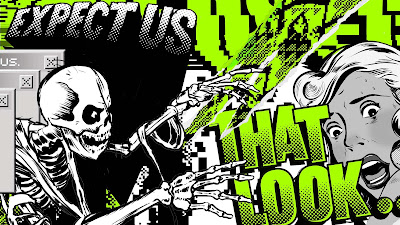 1. Epic Games will get some legs

Steam has been dominating the PC marketplace online for a decade and a half. It has in the last five or six years become well known for being an immense pit of despair when it comes to shopping for games, thanks to a series of increasingly poor policies on what games they would allow on their platform; short version is; too much garbage, and too hard to sort through to find the gems. They have in recent months gone to great lengths to try and refine their store....but I suspect for many it is too little, too late.

So with that in mind, Epic Games now has its own game store, and while it a bit anemic it does have some gems. More importantly, it has Fortnite for PC, and is therefore essentially already installed on millions of PCs. I've already grabbed the free copy of Subnautica and will likely look to future purchases depending on how things develop. Epic is poised to conveniently be a major contender to Steam right out the gate, all thanks to Fortnite. Remember when Steam ended up on all PCs thanks to Half Life 2? Yep.

2. The Next Call of Duty will have a Campaign

The rationale is that Activision wouldn't have more than one of its three studios developing CoD games try a Battle Royale mode, and that they also would be suspicious that this isn't just a fad right now, or possibly that they are too late to market. Therefore, based on their traditional design schedule, I predict that the next Call of Duty from Infinity Ward will probably be a conventional offering with a campaign, and also I bet it's either a sequel to Modern Warfare or Ghosts (shudder). Probably the former.

3. Bioware will announce a new Mass Effect or Dragon Age game this year.

This doesn't seem far-fetched, but I bet when they announce it the reveal will include a lot of apologetic marketing to appease the disenfranchised fans and also that the actual release date will coincide with the next generation release of game consoles.

We'll see the manifestations of this sometime in 2019, and Fortnite will continue to do fine, having captured it's market share, but I have a seven year old in the house and I can see how this sort of thing works; the millions of kids playing Fortnite will eventually get tired of it and force their parents to find some other video game to babysit them. You'll know Fortnite has descended to the realm of "popular has-been" when the twitch streamers start playing As Yet Unreleased Hotness X.

(Yeah this might contradict prediction #1 above but I say no! The new hotness could after all manifest on Epic's own platform).

5. There will be a new Alien Game announcement (and possible release) this year

The official channels are hinting at it, but unlikely we will see a movie release until Disney finishes carving up Fox's corpse, so I bet the hints are about new tie-in material, including a game. A game has been mentioned in 2018 titled Alien Blackout, but I bet thanks to CoDBlops4's mode they will have a different title when it is properly announced.

6. Ubisoft may actually give Assassin's Creed a break this year

This actually seems unlikely to me, but if Odyssey didn't sell well then I get they give a two year hiatus to the franchise again to let it rejuvinate a bit....and with any luck they fill that gap with a new Watch Dogs game (but I predict that won't happen....maybe by March 2020?)

7. Another obscure corner of gaming from around 1998-2005 will come back in style

Here's the rationale: as computer and video gamers move into their early thirties they tend to start pining nostalgically for the games they loved in their formative years. This is a similar phenomenon to what happens in tabletop, but I don't think tabletop gamers start doing this until their forties or fifties (when the kids are off to college, usually)....but video games ellicit a different response, especially for thirty-somethings who suddenly find that their dexterity, time, and ability to dedicate dozens of hours a week to gaming are all on the wane. Usually, a baby is in the mix and the desperation is for a game, some game --any game-- to play between diaper changes. The Switch understands this!

But the current crop of thirty-somethings in 2019 were around age 10-15 during their formative period, which was dominated by PS1, Dreamcast, early Xbox and Nintendo64. At least part of the current trend is to pop out retro consoles, usually in miniature (easy to hide/store in apartment) filled with memory-laden titles. Sony recently released and semi-botched their own effort, but not really; this is the generation that started with polygon-based gaming that looked amazing for its time, but has aged incredibly poorly (and quickly). As a result, they want to play games like they remember......but they will also want it to look better.

Most subgenres and types of gaming from 20 years ago are still around....so what game type is due for a revival? My suggestion: Myst and Riven style games! We've had a lull in pixel bitchers for a while, and the current trend is for very user friendly titles ala the late Telltale Games' titles. I bet we start to see a new crop of "Souls Like" Myst-inspired titles soon.

(Out there, but if there's one trend you can always predict in gaming it's that diehard subculture that needs games to punish them or they can't tell if they are having fun!)

Consider that last one my "really weird prediction."

1. I will finally catch up on Assassin's Creed games. I will complete Syndicate, Odyssey and Origins in some order at last. Unity's sour taste is at last out of my mouth.

2. I will enjoy The Divison 2 for a bit but will find it less endearing than the first if Ubisoft doesn't up the ante on the story component (which I bet it instead focuses on multiplayer).

3. I will buy the next Call of Duty because it adds the campaign back in, but then fails to innovate (so far only Infinite Warfare made any headway in innovation) and I will again feel had.

4. I'll be sick to death of Fortnite by March but will still play it with my son out of paternal duty.

5. I will finish The Legend of Zelda: Breath of the Wild, sometime this year. Possibly in the last week of December 2019....knowing how I roll....!

Maybe some movie predictions next!

Posted by Doctor Futurity at 11:00 PM