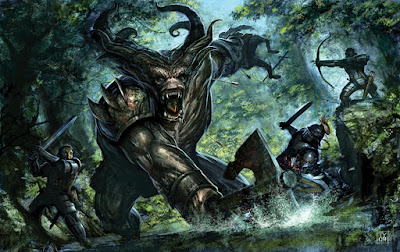 This weekend we tackled session three of Fantasy AGE. I toyed with the idea of shifting to a different system, but as luck would have it we had a smaller group and I decided what the heck, let's just stick with it for a while. I've found that after decades of gaming it's hard to really get a sense of a game's overall pace and potential until about five sessions. Sure, sometimes glaring errors pop out right away, but for me as a GM I usually know if a game's going to "do it" for me after about five sessions.

1. Combat seemed tedious and overly long in session two. How does that get fixed in this session, and do I have to engage in a houserule or optional rule from the Companion to do so?

2. My preferred style of play is more free-range and I like the ability to move in directions unanticipated in prep. If the players head out yonder on the map and explore the strange dig site that was supposed to be a minor stop over, will Fantasy AGE let me flex with the rules and cover some ad hoc content if I need to?

The combat solution worked out as follows: with fewer players making it to the game we decided to keep with the default rules, so no special combat or health reductions. I also want to read up on Modern AGE a bit and see how they developed that element in those rules. The net result was the following bits which I observed.

Perhaps due to its origins as a game system for Dragon Age, Fantasy AGE seems to work exceedingly well when there is only one or maybe a handful of opponents for the players to battle. My session two mistake might have been making the mistake of keeping the orcs at full health, when I should have treated them like half-health minions. Either way, combat against a single tough enemy or maybe 2-3 average enemies plays out very comfortably. Large groups work much, much better with a lot of minions.

The free-range flexibility question really boiled down to, "does this system push me to frame the scenario within its defined limits (mechanically), or does it act as a spring point for what I need for the game/story/scenario?" And of course, "When we get off track, is ad hoc play too difficult due to the mechanics?"

The answer to both is: absolutely yes, just fine. I ran the game Saturday night like I was running Cypher System, and it worked just fine. The group encountered multiple monstrous beings (two of which were distinct foes) but the ability to reskin content or fill out unanticipated stat blocks from a reasonable expectation of what was needed. Aside from one stat block in the Bestiary that I used with a distinct reskin, the other encounters were very easy to fill in on the fly.

Issues that I continue to mull over, but which will become more evident with time, include the fact that the game still feels a bit underwheming and low key when it comes to the magic, but I am curious if we will notice it that much over time. Compared to Cypher System or D&D, though, it feels like most magic in Fantasy AGE is very "low level" in effect and design. I am fine with this myself, but it does mean that the overall tone of the campaign will be less fantastical, at least from the angle of player ability over time. We'll see if that's an issue for the players.

There remain some oddities, but these feel to me like bits and pieces of a game system that maybe needed a bit more playtesting, and possibly a decent second edition to fix things down the road. Time will tell if Fantasy AGE has been popular enough for Green Ronin to take on such a task, though. With The Expanse, Modern Age and Lazarus in the works, the idea of a "Fantasy AGE Definitive Edition" would be a nice future surprise, and that edition could take advantage of the development to the system from Modern AGE and onward.

Still, we had fun, and I did enjoy the feel of the system. I'm looking forward to doing more.
Posted by Doctor Futurity at 7:53 PM