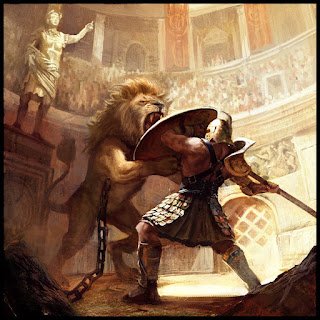 We've played a couple sessions of Fantasy AGE now, and as you know there's nothing like actual play to spot some rules oddities!

Here's what we've noticed so far:

No Unarmed or Martial Arts Rules

Yes, it turns out Basic and Companion rules don't really provide a set of rules for unarmed combat, grappling, or anything else. You can houserule (as I did) but apparently this is not something that went unrecognized as an issue, since I see martial artists are a thing in Modern AGE.

The good news is, you can probably port the Modern Age martial arts rules over to Fantasy AGE easily.

(EDIT: there is an unarmed skill that plays off Accuracy, and a damage value for fists....so it's not bereft entirely, but that's it. So when in game session one player wanted to throw down and disarm a foe it was entirely improv at that point.)

Okay, the problem here is dependent on subjective notions of what sort of damage you are dealing against a target, and what that target can soak. It also depends on what the GM's expectation is on how to build an encounter. Fantasy AGE provides loose rules on this, but after yet another game where I threw a batch of average difficulty monsters against the players I (yet again) felt that weird sensation that combat was going on too long.

Admittedly, we had 8 players against 18 orcs, so you might say, "what did you expect!?!?" but hear me out. I'd expect a combat like this to take a long time (and prove lethal) in Mythras. It would reasonably take an hour or so for D&D 5E, and I am sure it would take a similar amount of time in Cypher System. But Fantasy AGE's session ran about 3.5 hours for one combat, and that's not even with much downtime from people refreshing or learning the rules. Most of it was with the fact that the system, as currently designed, defaults to health points which are definitely inflated beyond "normal" limits. By this I mean: there's an expectation that if a sword strikes you for a lot of damge, you should have a reasonable chance of being killed in one hit. Mythras does this as the core conceit. D&D does this as levels 1-3 for most battles, and then escalates damage (and hit points) as you advance. Fantasy AGE? It seems impossible even with a 6 on the stunt die to do enough damage to take out a foe in one hit at starter levels and health without the GM deliberately reducing health. You either use a minions rule to cut health in half, or use the Companions book to modify how health and/or damage works.

For this test campaign I wanted to run the system straight up, first, to see how it felt in default mode. The experience has been that the only way to assume orcs and other 30+ health point monsters function is that they are really, really tough.

Whether this is a problem or not depends on what you expect a game to run like when a fight like this pops up. For some, this is fine. For others....it's a tedious length of time for what is supposed to be a shorter fight. I guess that's why the Companion offers up a bevy of alternative rules to make health or combat shorter and deadlier.

This impression may change with time, but right now, given most arcana don't have more than four spells in Basic (and maybe a few more in the Companion), the spell progression feels like a system built around the equivalent of 1st to 2nd level magic in D&D. There are insanely few examples of what I would call "role play" or non combat spells, but very few spells that are frankly all that impressive. Except penetration spells. Those are badass, even if they do minimal damage, because armor points are a bitch in this game!

Try buying an animal or a horse

Just try! You can do it in Dragon Age RPG, but somehow despite having a very comprehensive equipment list, and even having mounted and flying combat rules, Fantasy AGE is still missing purchasing costs for mounts and animals. Given that the equipment section in the book is clearly derived from the one in Dragon Age, it feels like more of a glitch and omission in error and less choice or oversight.

....Okay, my observations for now. I plan to run this at least 1-3 more sessions but I am debating pausing the game and just accepting Cypher System as my God of Games forevermore. ALso, maybe, tempted to talk everyone into trying Symbaroum next....!
Posted by Doctor Futurity at 12:29 AM