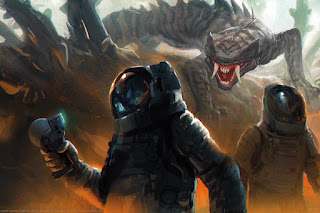 This was a strange year for gaming in my household. Notable this year was my son's reaching an age where gaming "clicked" for him; dad reached a unique level of gaming burn-out even as son hits his first stride; all of my top gaming discoveries this year were older games for the most part; and I significantly reduced my game collection earlier in the year via ebay.

Wrestling with what has felt to me like close to a year of burn-out has been tough. Part of me is certain the burn-out is tied to the exponential increase in my responsibilities at my business, which does indeed take much more time out of my life than it ever has before. Some of it is a more general genre burn-out, and discovering a game like Cypher System which let me break out of the D&D box a bit actually framed just how long I had been running D&D, and perhaps how uninspired I was now feeling as a result.

However, I have a great crew of long time friends and family I can game with, and that alone makes it all worthwhile. I have (due to work and other issues) taken more time off than usual this year on gaming nights, but with any lucky 2019 will be less arduous and I will rekindle my creative juices.

So in looking at 2018 in review, it's hard to pick out five or six things to address that are topically new. Instead, I'll do a "this was important to me this year" list instead.

This year I tried running Starfinder multiple times, managed a campaign on an off day for a few months, and got several stalled games running that I wish could have gone further. The general consensus is that Starfinder has a great premise and style, and manages to pull off a fun game in a Pathfinder frame. However, due to my difficulties this year it has been very hard to remain committed to Starfinder for the lengthy period that it deserves.

My campaign for 7E CoC wrapped earlier in the year, and it was a truly spectacular event. Call of Cthulhu's latest editions has captured my attention and this was a highlight of gaming for me in the last two years (the campaign started in 2017). I definitely need to run more CoC in 2019.

Despite being burned out on it, D&D 5E remains an important staple for me in gaming. Two events keep me inspired going in to 2019: first, my son has active characters (see an earlier post on this) and we are really enjoying this very simple, very straight-forward 5E game. I actually hope it will help me to start enjoying the game more generally again. I am also inspired by the Ravnica setting which WotC released. This is the first genuinely new setting for D&D in a very long time, and I hope it does well; D&D needs new and innovative going forward; it's got the "classic stuff" well covered already, perhaps too much so.

I haven't run it yet, but Numenera as a setting is one of the single most unique and fun settings I have encountered in a long time. It's material is inspirational for any fantasy or SF setting, and I have pilfered from it for my Cypher System games. I hope to finish reading through Discovery and Destiny (the new edition of the game) and have a a campaign lined up for this next year.

Discovering and then figuring out Cypher System was a major revelation to me. Just as I found myself getting tired of the old classics (or 5E's version of the game genre), while finding myself without the time or energy to wrangle the more sophisticated modern offerings (Pathfinder, Starfinder) or the dedication to learn new and unfamiliar things (Genesys Core), Cypher System arrives just in time for me. A game designed to be player-facing, loaded with things for players to tinker with while being written specifically with the time-limited or lazy GM in mind who wants to use RPGs for creative release but maybe isn't too interested in the stat block mini game, Cypher System is the best game find I've discovered in the last twenty years.

...So, going in to 2019, I realize I have some interesting things to consider. I want to keep running Cypher System, for both my fantasy-SF campaign I designed for it as well as my super hero setting and more I am working on. But I also want to run Numenera (same game system, so doing this is all about absorbing the volumes of content for the Ninth World), and really want to get back to Call of Cthulhu. I frequently feel a desire to return to Traveller, or something like it....and a couple oddities such as the Everywhen RPG and Fantasy AGE still command my interest.

It is possible, outside of my family game, that I might actually be able to stay away from D&D for a while. We'll see....a few more books like Ravnica and I will probably cave and dive back in.

Games not yet released, or games I am in the process of reading and thinking about using, could finally get some time next year. I still would like to run Cold & Dark, for example. I'd like to experience Elite Dangerous RPG, which looks really interesting in a "totally like yet not Traveller" way. Kult will eventually show up in print one day, and that is a game I very much enjoyed back in it's 1st and 2nd edition days.

A couple new games next year: the "new" Fantasy Trip, for example, deserve attention. Cypher System 2nd edition, of course! Over The Edge 3rd edition. I could easily get derailed with any of these three. But beyond this? I think I may be set, honestly. Such is life as an older gamer....getting stuck in my rut, if you will!