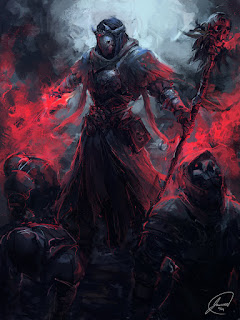 Age seven, that is!* Last night I ran a game of D&D 5E for my son (and my wife, who joined a bit late) for a game designed with several overt and covert intents. It was not my son's first game night by any stretch, but it was the first one specifically designed with him in mind.

The overt intent of the game night was:

--Have a fun family game night with RPGs that allowed my son time to process a story designed for his age (he shows up to my Saturday game night with mom, but it's a schizophrenic experience for me as GM to bounce between "adult group narrative" and a refurbishing of the tale for my son to enjoy.)

--Help him learn D&D. I settled on D&D 5E for a lot of reasons I'll discuss in a future post. But short version: he has a tiefling wizard he'd played before and wanted to play again, and he wanted to learn how to make a character this time, rather than have dad do it for him.

--Give old dad a chance to enjoy a really simple, fun D&D arc with a young player who is not jaded and does not metagame. Enjoy the game from the angle of an actual, completely new gamer to whom every single thing is new and interesting, and the sky is the limit; you old veteran GMs know what I mean: new gamers always, inevitably bring a fresh take to the table as they have no preconceptions at all; and young gamers are boundlessly enthusiastic and eager to boot.

But there was a covert intent, too! This included:

--continue to teach my son math. He's now doing addition and subtraction ahead of his 1st grade class, thanks to D&D.

--encourage my son to read. I made him a character sheet that was very "reader friendly" for his age, but as it turned out he really wanted to roll his own new character, and this proved just as effective at getting him to read. This has been an ongoing issue with his school; his teacher explains it like this: he is quite adept at reading, but he's not so great at retention. But his teacher is actively encouraging him to report on his D&D adventures since he seems to have excellent retention in the games. Our trick is "How to merge the power to pay attention to D&D with the power to pay attention to what you are reading." Maybe WotC could oblige with some junior reader books aimed at age 7-10 or something.

Overall, last night was a success for all overt and covert goals. My son played two characters:

I asked my son about the origin story for Test Subject 930, and he explained that he was a normal guy who was kidnapped by a secret lab, where they fed him a magic potion that turned him into a half-dragon. Nice!

I ran the game in the Vosjin Wood (from Pergerron; scroll down for multiple links), but left the details basic: "You're traveling to the city of Samaskar, where you hear there are lots of mages, including a school for mages where you could learn new spells, when you camp overnight on an old hill. In the morning you wake up, and the road is gone....forest is everywhere, and in the distance lurks a single, huge mountain that was never there before. You see a tower two miles away, what do you do?"

And so began the adventure! He went to the tower, at least partially because I had already put down a beautiful wilderness map with a tower on it (a Paizo map) and he was eager to explore it. Along the way he discovered an abandoned mansion, possibly once inhabited by the tymardiae, so he went to the largest house to explore (new map).

As our trusty hero Punk Rock Demon and his henchman Test Subject 930 approached the mansion, they spotted a goat emerging from a large hole in the crumbling wall. Seconds later, as they hid to approach, a gigantic goat, larger than an ogre, emerged from the same hole and spotted Test Subject 930 (hereafter TS930) in his hiding spot! TS930 promptly fired a scorching ray at the goat, one of which hit a regular goat and sent it fleeing (minimum damage), while another singed the building side and a third angered the super goat. The goat charged, and after a brief battle it was goat meat.

TS930 spent time harvesting goat meat, getting 8 days of salted meat rations to carry with him. Punk Rock Demon entered the collapsing mansion where he luckily was not spotted by a lurking lizardman with more goats. After a tense exchange he approached and convinced the lizard man he meant no harm. "Oh, the forest got you, too. Where were you going?" the lizardman asked....and much to dad's pride, my son announced, "I was going to the city of Samaskar to learn more magic!"

...I have gamed with a lot of adults who can't/won't remember the weird names I come up with for fantasy cities. But my son remembered it after being told once in an intro narrative.

Anyway, the lizardman insisted they owed him 20 GP for killing his prize giant goat, so they paid him and he went on his way. The hero and his henchman then finished harvesting the goat, and then looted the mansion, finding a box in a hidden compartment behind an old stone throne.

Around this time my wife arrived from her finals and joined in with Sartorius the drow warrior, who had snuck up on the two after also being trapped in the Vosjin Wood. He had sisters from his drow clade who wanted him brought back, and two bugbear bounty hunters were on his tail.

After a brief introduction between drow, tiefling and dragonborn they were accosted by the two bugbear bounty hunters who tried to net the drow and tiefling, but botched it. A fight ensued, and Punk Rock Demon put one to sleep before getting clocked with a mace. As Sartorius pumped them full of bolts TS930 then fried them with burning hands. As the last one fled, Punk Rock Demon rolled a 20 on his recovery/stabilization roll.....fortuitous! My wife bought brand new dice and her D20 rolled a natural 20 four out of six times in its first use.....hmmmmm......

They finished looting the hidden treasure cache and the now dead bugbear bodies, and prepared to move on to the tower. The lizardman had warned them that an old hermit named Aruman had been lurking near the tower, and that he might be able to help them escape the Vosjin Wood.....


*Not the first time I've introduced someone to gaming at a young age. Technically my sister was 8 when I introduced her to D&D (I was 10). Her first character was named Wormi. Wormi is an important NPC these days in the Ages of Lingusia setting. So who knows! Maybe one day Test Subject 930 and Punk Rock Demon will be prominent forces in Pergerron.
Posted by Doctor Futurity at 3:31 PM