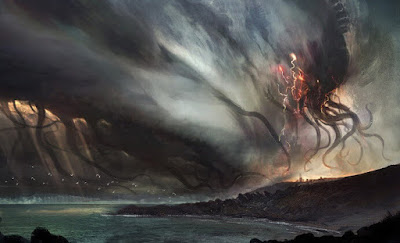 Ah, this is going to be a tough one because the game industry (for RPGs, at least) is fairly stable and predictable these days. But I'll give it a shot with some suggestions for what may come to be:

1. D&D will see an official sourcebook for at least two of these: Spelljammer, Dark Suns, or Eberron

It's clear that Wizards of the Coast has been setting up all three for a return at some point, the question is just: when? And will we see more Ravnica/Planewalker stuff for Magic soon?

I have no bone in this failed Kickstarter that is somehow still in limbo after something like seven years. Follow Erik Tenkar for occasional "updates" on the Kickstarter, but the only certainty anymore is that clocks are right twice a day, and this Kickstarter kicked the bucket a long time ago, but the author manages to keep stringing it out to hopefully run out the statute of limitations on lawsuits, I am guessing.

3. Modiphius will hit some sort of Criticality this year

Modiphius is a prolific publisher and distributor, and just acquired the controls to the entire World of Darkness line in the wake of some shake ups at Paradox/White Wolf over poor editorial controls. As a result Modiphius now has a ridiculous number of titles and IPs under its belt, possibly more than they can handle, although I admit I have no information on total staff size or arrangements.

In general Modiphius has been brilliant at handling high quality print and PDF distribution, Kickstarters and distribution deals. I don't know how long they can sustain, and given that they were the only retailer online I ordered from in the last two months that was not quite able to fulfill their orders within the same month that the orders were placed, I suspect that they may be a bit overwhelmed. My prediction is that this year Modiphius could do very well, but it is possible --likely, even-- that they have bitten off more than they can chew at last, and I wonder if some of their product lines are maybe not moving as fast as they should? Even Cubicle 7 seems to have streamlined their product schedule, for example.

It could be that Modiphius is effectively sliding in to a new category of publisher/distributor and maybe is closer to Fantasy Flight Games in terms of scope now than, say, Cubicle 7. But I predict either way that we'll see some sort of impact on their high volume of product output this year.

4. D&D will see more than four major releases from WotC this year

D&D seems to be doing well enough that we're seeing more product creep, which is either a good thing or not depending on who you are. I predict we will see five major releases this year instead of four like last year, with some clever tie-ins to work it all together.

5. Pathfinder 2.0 Release will please the hardcore and capture the curious but fail to expand market share

I don't think this is a brave prediction, unfotunately. I think that the open playtest led to an unfortunate feedback loop in which players turned off by the playtest simply bailed out, and the ones willing to embrace it stayed in, and as a result the playtest will be a solid refinement of what that core likes, while missing the information necessary to expand the game to include the larger overall audience. Will it be playable? Absolutely. Will it be worth playing? Only if it offers an experience that is competitive with D&D in a way that is going to capture new players. Unfortunately I think it's going in the opposite direction.

6. Palladium may go belly up

Possibly not until 2020, but I have a feeling that Palladium will hit rock bottom and finally go kaput this year. Too much negativity from burned fans over Robotech may be the cause, but it's chiefly due to the fact that while many could argue Palladium's games have been stuck in the nineties, now even their business practices are stuck in the nineties, and this along with what seem to be perpetual financial woes may be it for them. I could possibly be wrong here.....but only in that this may not happen until 2020 or maybe 2021, but since I need something contentious for my list this is a good bet.

7. The Fantasy Trip gets a serious revival

This is a no-brainer: TFT is being released, in print, by Marchish. Steve Jackson Games is providing an encouraging online storefront for new product. We'll see the release of classic TFT lead either to serious expansions or a 2nd edition announced before the end of the year.

Fingers crossed, we will see the new 32 page BRP book and maybe an updated Mythic Iceland in PDF at least before December 2019. Of course, Chaosium still needs to get print versions of the Glorantha Bestiary and GM Screen out, which I sincerely hope does happen....even if you're not a Glorantha fan, the game is amazing and deserves attention. It will MAKE you a Glorantha fan!

....okay, that's enough of that! I'll do one for Computer Gaming next.

Posted by Doctor Futurity at 11:28 AM