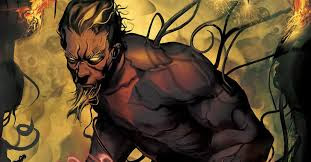 The Demon has enhanced strength from the Metahuman Soldier formula after undergoing the treatment in the Army's Super Soldier program. Devon was discharged from the military after his body rejected much of the supersoldier treatment, leaving him with debilitating deformities that some likened to a “demonic mask.” It was with some irony following his discharge that Devon realized he was following in his uncle Jack Sloane’s footsteps….literally….he took to visiting his uncle in prison. Jack Sloane was himself still in peak physical condition thanks to his stolen supersoldier formula which he had used on himself decades ago, but he was crippled from the takedown in 2006 when the League finally apprehended him and would never walk again. During these visits, before Sloane mysteriously died, he left key information to his nephew about the location of his hidden base.

Devon took his uncle’s secret information and found the Demon’s old base. He uncovered the original gear of his relative, and after finding the last copies of the Demon Serum he decided to ditch the treatments provided by the military and injected his uncle’s formula into himself. The formula didn’t fix his gruesome, demonic appearance but it dramatically enhanced his strength and speed, at the cost of his remaining sanity. Now enhanced and geared up, he works in illegal metahuman drugs and arms trades.


The Demon makes a good low to mid level thug for a superhero game. He's not the end boss....he's the guy the end boss hires to do the dirty work. For most mission the Demon relies on his gang of personal thugs, who often wear demonic halloween masks and brandish assault rifles. A typical demon thug is a Level 4 or 5 ex-soldier or ex-con, usually hooked up on one of the synthetic chemical mixes that The Demon brews specifically to force loyalty and remove any sense of self-preservation instinct.

The Demon Suit (Level 1D6+2): this armored (3 points) suit is flexible and considered medium armor by weight. It's got a short cape, a demonic mask, and includes a respirator to resist toxins as well as breathe underwater. (Artifact, Depletes on 1 in 100)

The Demon Wing (Level 1D6+2): this monstrous jet-fueled air glider is a rocket waiting to explode. The original design was a black ops device designed for one-man insertions into hostile territory, but the small one-man glider wing is now a backpack-equipped set of vile looking metallic demon wings which allow for some mobility in flight. The wearer can move in a straight line a long distance and can make one positional change for the next round after that move. If a PC gets a lucky shot on the wearer of the Demon Wing then on a 19 as a special effect the wing can lose control; on a 20 the engine explodes, dealing it's level in damage. (Artifact, Depletes on 1 in 20)

Demon Grenades (Level variable): these are cyphers that the demon likes to use. They are usually Gas Bombs, Detonation (Pressure, Massive or Flash) and Poison (Explosive). He usually has a bandolier with at least 2 of each. (cypher, one use)

Posted by Doctor Futurity at 2:03 PM