Starfinder Logs: The Rise and Fall of the Aeon Empire 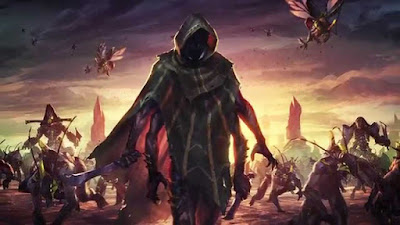 Stretching across the spinward stretch of the Conarium Expanse and spilling in to the area known as Necrospace are the remnants of the old Aeon Empire. Drawn from the advancement of the ancient Haradrim Imperial Consortium on the planet Tesophar, this budding starfaring world became a hub of activity as its united consortium of mercantile organizations expanded outward into the stars after the discovery of the Drift, when elders of the Order of Triune arrived to spread the word of their stellar god.

Within two centuries the Haradrim Imperial Consortium had grown to cover nearly one hundred worlds of varying habitability, from old Tesophar the capitol to remote Tyrnaides, a colony world on the edge of known space at the time. It is said that the Consortium prospered like this for five centuries before conflict arose. The House of Aeon rose up, already known for its military factories and private mercenary companies, and the first elder of the house, Teodan, decided that the Consortium no longer served any purpose. In a war lasting a century the old rule of merchant houses fell and Aeon rose up, declaring Teodan emperor. He ruled for two more centuries using unnatural aging practices both biogenic and arcane to sustain his lifespan before being assassinated by his great granddaughter, Persemene, who took the reign as empress.

The Aeon Empire was said to have lasted a thousand years and covered as many planets, spreading throughout the region called the Haden Expanse and the spinward rim of the Conarium Expanse which defied even the Aeon Empire's efforts to conquer and expand. Haden Expanse was dominated by the Empire, but when it fell, it was renamed Necrospace.

The Aeon Empire ruled through fear and paranoia. It's reign of long lived near-immortal emperors went through six successions, starting with Teodan, then Persemene, who later was killed and replaced by her clone sister Amoree, who died in battle not long in to her rule and was replaced by her son Gathas. Gathas ruled three centuries before tiring of his reign, and he handed off control to his son Spartos before traveling with an explorer fleet into the Unknown Vast. Spartos ruled for two more centuries before being assassinated by his own son Veros.

Veros was the last ruler of the Empire before it collapsed in civil strife and the necrophage plague. The Empire's fall was precipitated by a rise in insurgent worlds seeking to escape the totalitarian grip of the Emperor. The leader of these worlds was Caliria, a peaceful world which was located along the edge of the Empire's expansion in to the Conarium Expanse. A rebellion fomented here and in neighboring worlds, and opposition leaders gained secret funding from the Karthan Star Empire which was troubled by the Aeon Empire's presence and hostility. The Azlanti Empire, which had only recently discovered this region, also sought a way to undermine this dangerous rival deep in the Vast and provided carefully smuggled munitions and military training.

The colonial uprising sent Veros in to a tailspin, first murdering and usurping his father and then instituting a weapons program to wipe out his enemies. This led to rumors of a secret shipyard where spies claimed the Empire was building super weapons. The shipyard was rumored to be in an all-but-impossible to locate region of space in the Unknown Regions called the Vortex, where a convergence of of singularities created a unique portal in to the Drift. There the Empire had forged a military base called Terminus Station. When the Empire collapsed all records of this location were scrubbed, and to this day no one knows where the secret weapons manufacturing station is located.

In the final days of the Empire it is said that Emperor Veros assembled a vast fleet and went to bombard Caliria into ash. En route the fleet was ambushed both from saboteurs and the secretly amassed colonial rebel fleet. The Emperor's power was decimated in one swoop, but not before he issued a command to a remote research station on the colony world of Tyrnaides. There, in the remnants of a ten thousand year old rusting space hulk found in the deserts of the ancient world researchers of the Empire had uncovered a rift into the Nether, where the planes of Chaos bled in to the mortal realm. They had studied the hulk and its bleed, and learned necromantic secrets which were blended with the cybernetic and biogenic research of the Empire. The result was the Death Plague, which in his final hours Veros ordered unleashed.

The death plague was an undead creating plague, which spread like wildfire from its seed point on the Blackstar Station around Tyrnaides and throughout the Empire and beyond. In the space of five years 90% of the Empire's worlds were devastated, as were many of the opposition and neighbor worlds. The Karthan and Azlanti Empires both quarantined the region until it was determined roughly 80 years ago that the death plague had apparently mutated and was no longer dangerous, though entire worlds were now overrun with the living dead, who often proved effective carriers. The Haden Expanse, once home to this vast Empire, was renamed Necrospace as a warning to all.

Despite the destruction of the Empire, a century later many worlds still thrive in the region, though travel is often restricted. Caliria survived, but it took extreme measures to do so, destroying any ships which arrived in-system from potential destinations in the collapsing Empire. Ironically Tyrnaides itself found the death plague largely burnt out, and the world was colonized by several kasathan clans fifty years ago, followed not long after by shobad raiders. Today Tyrnaides is a freeport and a safe haven for scavengers picking over the ruins of the old Empire. Few realize that it was the origin point of the death plague.

Today, travel restrictions in the region are either lifted or removed entirely, as the advances in Drift technology have made the ability to reinforce passage to and from quarantined worlds all but impossible; most worlds with high concentrations of the living dead are monitored by remote automated defense stations that warn visitors of the risk and shoot down attempts to leave a planet once visited. Of the thousand worlds of the Aeon Empire, less than 100 are considered "safe." Hundreds more were bombed out of existence....including the Capitol Tesophar, which was glassed from space by the old Calirian rebel fleet. After purging the lost worlds it is said that Caliria mothballed the fleet, though it was not destroyed, should it's need ever rise again.

Next: visiting Tyrnaides and Blackstar Station 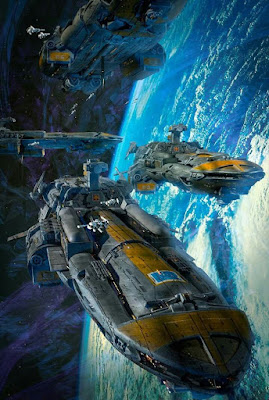 Death Plague: Type: disease (two types: on contact or inhaled); Save: Fortitude DC 17 (contact) or DC 19 (inhaled); Track: Physical; Frequency: 1/hour; Effect: at the Impaired state victim acts like he suffers from Confusion for next hour; at bedridden state victim drops to 0 HP and becomes an undead (some type of zombie or ghoul usually) within 1D6 rounds. Cure: 3 consecutive saves.

Notes: Contact is the common form encountered now, through being touched or bitten by undead created by the first wave plague. Inhaled is a rare original aerosol form of the plague. It may still be found in untouched century-old containers from the days of the Empire in rare military installations. Once released, this aerosol form remains effective for 1D6 months. Despite similarities to the necrophage which forged the legends of the ancient Tomb Ships, the death plague is not related....so far as anyone knows. At least one scholar named Abuman Sur on Tyrnaides is convinced that the death plague is only the latest in a series of life-destroying viruses introduced by the beings of the nether into mortal space, and that the lost world(s) from which the Tomb Ships hail may have suffered a similar fate.

The death plague is believed to have both biogenic and necromantic components. It's ability to affect across species is considered a potent element of the necromancy introduced by the addition of sorcery from the demons of the nether.
Posted by Doctor Futurity at 10:59 AM