Runequest: Roleplaying in Glorantha is now out in PDF 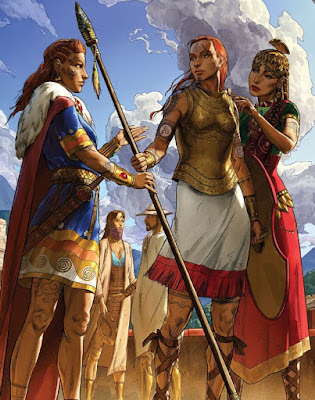 You can find it here on Chaosium's website. There's free downloads of some sample monsters, a background worksheet and a character sheet. I'm balking at the price right now ($27.95) for a book I really want but am not sure just how much it is tied in to the Glorantha universe.

Example: a background system which is not custom tailored to Glorantha would be useful to me because I could extrapolate from it to other settings. Can I do this in the book? I don't know, but the background sheet provided suggests this might be hard since it even provides Glorantha calendar dates prefilled for your character's history.

I used to run Runequest 2nd edition (and later 3rd edition) in my own settings, which were tinged with the essence of what Runequest had to offer (the runes, spirit magic, and monsters inherent to the system) but back in the 80's you could use all that without seeing much Glorantha in the mix. I'm curious if this system can work that way, too. I mean....technically I'm doing that with Realms of Terrinoth right now to run my own setting with the Genesys Core default fantasy realm as the base.

I think the only reason that it is more of a question with Runequest: Adventures in Glorantha right now is because it seems very clear that the new edition is specifically aimed at being a vessel for this campaign, and Chaosium has indicated that future fantasy earth supplements will be their own separate deal; this is not going to be a "one rule book, many settings" approach. A lot of fans have had thirty years of Runequest editions that allowed you to design your own universe, so going back to Runequest's earliest roots like this is a little jarring for us.

Still, I love this ruleset, and it really looks from reading the free content like this new Runequest is very much an iteration of the system I love the most. I will probably cave and get the PDF....more to come once I've done so and had time to absorb the new system. If I can even just use it to create my own uniquely flavored universe once more with the style of a Runequest Glorantha but the trappings of a world of my own design (say, if I could use it to power Pergerron) then I will be satisfied.

Sometimes I do wish I was the kind of gamer who could just relax and enjoy someone else's universe......but a fundamental component of what I enjoy about this hobby is having the tools to create my own, not the Rough Guide to visiting someone else's.

UPDATE: Got a copy. In reviewing the contents this appears to be very much a core rulebook; while the writing and art is flavored with Glorantha (and it looks damned nice, read extremely well) the immensity of the tome is focused entirely on character generation, rules, magic and downtime.....a bestiary is yet to come, and it looks like there's not much more direct "Glorantha campaign" content in this book than in original RQ2, beyond the fact that the background system is entirely flavored with Glorantha in design. It's very interesting....Gloranthaphiles are going to be ecstatic, and I think people who are just looking for an easy system and setting to pick up and run with will find this an efficient way to jump in.

UPDATE 2: Reading through this is making me want to strongly work up a "Conversion to Archaic Earth" doc for my Mesopotamia campaign.

UPDATE 3: final comment before I take proper time to dive deep....I am amused that the conversion doc in the back is aimed squarely at RQ2 and also RQ3. This is definitely a succession to those two editions, and in many ways an "alternative" RQ3 for a new altered reality timeline.

As I plow through, I am both awed that the book does such a fantastic job of making Glorantha look on the surface like an accessible play experience (something I feel prior editions were not that great at) and disappointed to realize that there are no longer really any of  the general purpose tools to let you add to and do what you want with RQ. For example: you can use the cultures of Glorantha and the Glorantha background, but beyond a quick and dirty method provided to get a PC in to play there's nothing really that provides guidance on designing new backgrounds and cultures. Likewise, every cult you could want from Glorantha is detailed in glorious depth but I am not seeing any direction on new cult creations, orders or other elements added in other iterations of the game. As a result, adding your own stuff will be through extrapolation rather than any guidelines.

I'm liking this book's design a lot, and impressed at how hard it works to make Glorantha accessible, but it's definitely "Roleplaying in Glorantha" and using it for anything else is probably more work than I want to put in to the process for, so I don't think Mythras or the BGB are going to stop being useful anytime soon.

Posted by Doctor Futurity at 9:14 AM