Last night my son actually sat at the table (for the most part) and participated in a Savage Worlds SF Game I ran (more on that later). This turned out to work out quite. Well. I mean...he's 6....but he listened to GM dad, and responded with coherent choices that showed he was trying hard to understand where he was at. There was only one moment where he got derailed from "what is going on" vs. "what he thought was going on," and the group got him on track. Also, thanks to my regulars for putting up with this experiment =)

So the fun narrative of Ensign "Tattletail" (gotta work with him on names)! A Intersec Colonial Security driver who got to pilot the APC the group took to a remote colony under alien attack! Ensign Tattletail got to, among other things, run over some aliens, get the group into the colony biome and to the security building, backed out of the security building parking garage when it was revealed to be full of aliens, escaped a trap where the aliens dug a hole under the road so the vehicle would be disabled, and then tried targeting the satellite dish where the mad scientist was using the broadcaster to try and summon the evil alien god. Then he helped escort the colonists they saved in their convoy.

Anyway, for those who are also gamer dads contemplating this experience, some advice....

Savage Worlds is a really good system to introduce kids to, as long as you supervise them. The dice mechanic was easy for him to pick up, and I conveniently made him a character that all the key skills were "D8+wild die" which meant he could roll the same dice consistently.

In considering this, I think White Box for Swords & Wizardry is also a good system to introduce a new player. That said...my son's spark of interest started with Starfinder, which is a needlessly complex system for adults let alone kids, but Starfinder is slavishly illustrated with amazing art, which immediately piqued my son's interest. Savage Worlds luckily also fits that bill, but I used Starfinder to help illustrate characters for my son while using the SW rules for actual play.

I've actually tried Basic D&D (classic 1981 edition) with my son earlier this year. It was interesting because he was still a bit disconnected from the rules vs. what the play approach was, but he conceptually was there from the imagination angle. Six months later, after last night's session, I think it's time to revisit the D&D experience, using either Basic D&D or White Box, because he was totally on target last night.

That said: we gave him permission to hang out with his tablet or friends (other kids who come to the game store) while other player events unfolded, because a normal adult group of six players = a lot of content the kid is not interested in. I realized that a smaller group of maybe 2-4 would work really well to help foster focus and cooperation, but it needs the right kinds of players (I am thinking 2-3 friends of my son, and my wife as the co-wrangler). A game designed for a kid's attention span, understanding and pacing would be an interesting experience, and fun to pull off, so I am eager to try this out soon. 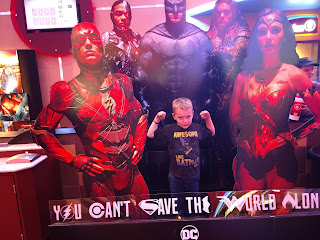 Posted by Doctor Futurity at 11:41 AM