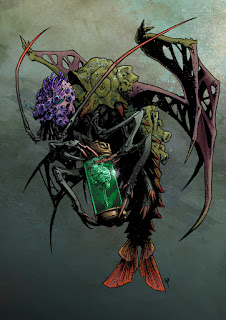 For the first time in over two decades I've run a Call of Cthulhu campaign that has now lasted more than twelve consecutive game sessions. Most CoC games I've run usually make it as far as 6-7 session before an accumulation of events finally hit that climatic endgame and the surviving investigators abruptly retire and retreat to the areas of the world they mistakenly think are safe. Last year my campaign ended after about eight sessions with an abrupt and highly revelatory conclusion that also left roughly 60% of the party dead, including at least one second new character introduced after the first expired messily. Eight sessions felt like a lot. I've run CoC games in ages past that made it to at least 12-15 sessions, but those haven't been since the nineties. I've played in only one CoC game that survived 12 sessions, but in fair disclosure those were sessions back in the late nineties/early 2000's that ran the entire day, so the had the quality of a younger man's marathon run.

Needless to say, for a long time now CoC has been my go-to game for very specific short campaigns with definite conclusions, usually lasting from 1-6 sessions. I have never been the sort of CoC GM to really grokk how to run (and sustain) megacampaigns like the Antarktos Cycle or Orient Express.

The new campaign I'm hip deep in was built around some interesting premises, and was inspired heavily by David Lynch's conceptual basis for Twin Peaks: The Return. I still plan to write more on that show soon, but suffice to say that it is the only creatively interesting film or TV I've seen in many years, and I'm on my third viewing now that the Blu Ray edition has been released. It was so interesting, in fact, that the initial game I ran was originally intended to be a 1-2 session CoC campaign with a zombie apocalypse inspired by Herbert West's Reanimator tales, but I almost immediately cancelled that and turned it around in to an ongoing story arc that simply began what looked like a narrowly averted zombie apocalypse.

The idea for the revamped CoC campaign was a sort of "Oregon sure is weird, and a lot of stuff happens here," kind of approach. I took the actual town of Coos Bay, as well as other locales such as North Bend, Astoria, even the Ape Cave region in Washington, on down to Mt. Shasta just on the California side and worked out what effectively amounts to about a dozen Call of Cthulhu scenarios' worth of modern day adventuring, all starting just a month or so before the eclipse earlier this year. Each scenario was tied to one or more of the others by virtue of specific characters, or plots, or artifacts, or the schemes of certain factions of mythos monsters that have a presence in the region. All of it ties in to a couple "super plots" which provide much of the driving background impetus.

The game is still going strong so I can't provide details, unfortunately....wouldn't want spoilers for the players!...but I plan to eventually try to outline the whole thing in a coherent format. One of my players actually built an amazing spreadsheet to try and track all of the goings' on and figure out the relationships of the various associated parties, events, people and places they had visited.....it's almost a work of art in its own right.

The Twin Peaks influence comes in like this, using these steps:

#1. Have lots of separate stories, all possibly related somehow, going on at the same time.
#2. Give each PC a connection and motivation to resolve one or more of those stories, with a few showing evident overlap.
#3. Keep recurring villains going for as long as feasible, but let them go out in style when the opportunity presents.
#4. Don't be afraid of longer or more quiet moments. These are great for setting mood or resolving obscure plot bits....or creating new ones.
#5. Have some basic underlying ties to everything that are, from an endgame perspective, fairly simple. The idea is to "make it look convoluted and maddeningly complicated at the start, but in the end make it look simple and resolvable toward the end," but then, in true Lynchian fashion pull the rug out from under them just when it looks like closure and simplicity is in reach.
#6. Death as an end goal...even madness....is not a primary means of player death though such possibilities lurk. The group so far has only had one actual player death and one retirement/replacement. But all of them are ready with backup characters because the risk of actual death has been insanely high.
#7. Play out weird and unpleasant relationships with the mythos wherever possible. Also, not all mythos encounters are necessarily bad....some might oppose the actions of others and may be indirect allies! This isn't giving much away....but the Esoteric Order of Dagon in fictional Coos Bay is, in fact, the closest thing to an ally the players have right now. Chiefly because things going on in the region do not benefit the order in any way, but hey.....beggars can't be choosers.....

Anyway, those are some of the driving components of this ongoing campaign. If I have my way, and it looks like everyone is sufficiently invested that this will come to pass, but maybe this will be a campaign setting that runs for another 12-15 sessions, making it the longest CoC story arc I've ever run. Factor in that one of the PCs in this game survived last year's 8 session campaign and that means at least one of these characters has already hit an impressive 20 session survival rate, with more to come!

Anyway.....back to working out details on next week's session!
Posted by Doctor Futurity at 6:00 AM