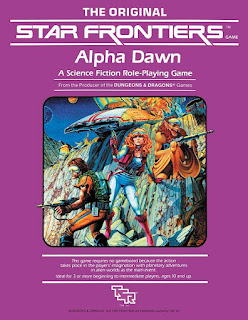 After a very long absence (barring fan reprints) Star Frontiers: Alpha Dawn has returned....! It's located here on rpgnow. This is one of the classics, and behind a few others (Traveller Classic, Space Opera, Starships & Spacemen and Universe RPG and one or two I haven't mentioned) is one of the earliest straight SF RPG titles in the history of gaming. Needless to say.....this is an OSR sci fi fan's dream right here. Several other books in the series are also currently in PDF format, as well.

Star Frontiers has only seen print since the mid eighties in a few odd ways: it's been reproduced in some format via Star Frontiersman and Frontier Explorer, which has always claimed (accurately, I am told) to have been given rights by WotC to reprint the game as well as provide fan support through a regular fanzine. Presumably that right to reprint has been returned to WotC now that the original is back. In the early 00's D20 Modern got a Future supplement that revived some of the Star Frontiers classic aliens as well...and that's pretty much been it.

Anyway, looking forward to seeing this in print and here's hoping the quality holds up....as most of WotC's reprint POD editions have!
Posted by Doctor Futurity at 5:53 PM