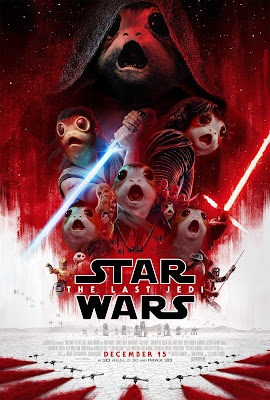 Well, the wife and I got a chance to see the movie tonight ahead of tomorrow's scheduled family event with the kid. Yes, we are bad parents who saw Star Wars: The Last Jedi a full 24 hours before our son, and we even lied and told him our date night was to see the The Disaster Artist. He wanted to see it too, until we played the trailer and he realized it was not Geostorm, the disaster film he also wants to see. Different kind of disaster!

Anyway! This might be my favorite Star Wars movie now. It was...well, I was trying to look disdainfully on all the early reviews and ignored all of them as well as any possible spoilers, just so I could go in to this film with as little bias as possible. Keeping in mind I loved The Force Awakens (and yes, I have no problem with the idea it was an homage to the original movie) I was looking forward to seeing how Finn, Rey and Poe fare in this new movie.

Hooo boy. The Last Jedi did (in some way) try to pay homage to the Empire Strikes Back, at least insofar as it structured itself in a not dissimilar manner, even as it defied convention for a Star Wars film at every opportunity it could manage to do so.

It's hard to talk about this movie without risking spoilers, so for now at least I'll chat about the generalities, as follows:

The Last Jedi sought out clear "Star Warsisms," the things we tend to expect in a Star Wars movie....whether it's set pieces, thematics, underlying tones or moods....the overarching heroic tale. You name it....The Last Jedi turned convention on it's head.

Then, it subverts, smashes, inverts and otherwise seeks to pull it's own "Empire" by carefully deconstructing those expectations. All while still capturing the magic that is Star Wars. It was kind of strange to watch at times, actually. I had several moments where I was like, "This doesn't feel like a Star Wars movie," all of a sudden. Only to be suddenly yanked backed in with a "Oh snap, this really is Star Wars, but....wow....look what they did there."

It made for an interesting ride. I'll just sum it up like this: this movie was so good that I really wish Rian Johnson were making the next movie. But I'll accept that Rian Johnson is in charge of the next trilogy.....that may, in fact, be even better. This is a director and writer who, unfettered by having to make a sequel to a J.J. Abrams film, might be the best thing to happen to Star Wars since Irving Kushner, Lawrence Kasdan and Leigh Brackett.

Now for a few Spoilers! I'll hide them behind black text so highlight if you want to read these.

Amazing Moments in The Last Jedi:

There are indeed a LOT Of cute creatures in this movie. And the porg are just one of them. You will, if you have kids or need to buy presents for kids, probably be buying a lot of porg-related media for them. It's okay....these are not as terrifying as ewoks. They're more like....space penguins, crossed with tribbles.

The entire "Sith assassination" scene...my wife and I both felt like a moment from SW: The Old Republic snuck in to the middle of this movie

I love how the key questions people have been spending too much time on never really got answered. Questions like Who/what is Snoke? --irrelevant now! What are the Knights of Ren? --probably very dead! And Rey's parents? --Hah! Wrong question all along. And best of all: So yeah you totally can trigger a lightsaber switch with the force at distance.

How did the First Order notice Finn and Rose leave with enough time to get to the Gambler's Planet to set up their elaborate ruse, just to....um....get them to come back to the super star destroyer so they could gloat on capturing them? They frickin' had them in the brig on that planet. I may have missed something here....will be seeing the movie again tomorrow, maybe that will clear up.(Edit: Yeah I missed some dialogue (a bit quick); basically the splicer conned the First Order by selling them the info he overheard Poe taking to Finn about before they cloaked in to the Super Star Destroyer).

Where is R2 at the end of this movie? Because I kinda have this weird feeling he's stuck on Porg Island. (EDIT: Nope, just wasn't paying attention...he's on the Falcon at the end).

So was that it for Captain Phasma? Or shall she return next film as a cyborg monster for revenge?

I am totally loving that frienemy deal going on between Hux and Kylo Ren.

One More Question: So, were the crimson guard also the Knights of Ren, I wonder?

Posted by Doctor Futurity at 12:20 AM