Saturday was an upheaval! I brought forth a new White Star campaign, and my good sport players conceded that it was probably better to play what the GM wanted to run and was ready for. It helped that three of the players on Saturday experienced White Star on Wednesday....anyway, I'm very pleased.

The new campaign is a completely new thing. As I explained it, this universe ties in to the prior campaign in a "alternate reality/mirror universe" sort of way. I'll post an actual play report this week, but the short version of this universe is as follows (queue scroll): 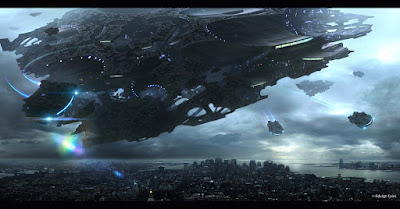 The Universe of the Regency is a galaxy in conflict. 30% of known space is held by two major entities: The VEGAN EMPIRE rules with an iron fist, using it's enforcers, the VOID LORDS of the ORDER OF TYPHON to subjugate all worlds, species and cultures under its iron rule.

Meanwhile, the STAR KNIGHTS of the REGENCY are a peacekeeping force serving the hegemony of mankind, which has ruled in peace for a thousand years. But now the VEGAN EMPIRE seeks to establish a treaty with the independent worlds of TAXARI SPACE, a major bridge between their empire and the REGENCY. The independent worlds are seen as uncivilized, where you can still meet genetically unmodified species, living in technological and political isolation from the rest of the galaxy.

The ORDER OF TYPHON has sent a diplomatic force under the direction of LORD ARKOS to the independent world of ARMANNEOS III, where GOVERNOR LOAR rules local space with a benevolent hand. They seek to convince the local government to ally with the VEGAN EMPIRE. The REGENCY has responded by dispatching the refitted military vessel MYSTERY UNFOLDING with a team of special agents and STAR KNIGHTS to intervene and convince the independent worlds to stand strong. Elder STAR KNIGHT ATRISTE leads the expedition.

Meanwhile, beyond the edge of TAXARI SPACE lies the evil QUINLON EMPIRE. EMPEROR KAAN has allied with the ORDER OF TYPHON, and an insidious plot to sieze control of the independent worlds is about to begin...

So the tale begins!
Posted by Doctor Futurity at 1:00 PM