Digging through the Shelves: Cryptworld, GURPS, Mutants & Masterminds and CoC vs. Minimalist Ideals 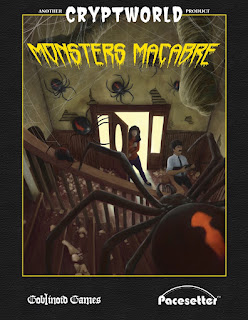 In excavating my collection I have run across some gems I had forgotten about...which only complicates my plan to go minimalist (or at least make a vague effort at such).

Cryptworld, for example. What a great game this is! I like Chill 3rd edition, but you know what I'm still doing with that book months after purchasing it? Still reading it, or trying to find the time to absorb it. Cryptworld, however....I read and finished that over a weekend, and was ready to run it. Add Majus, Rotworld and Time Master in to the mix and you have a very nice set of genre-building tools using the Pacesetter system. Daniel Proctor needs to produce a sci fi setting for Pacesetter, and the system will be complete--anyone else remember Star Aces? My underestanding is Star Aces exists in the hands of someone else now, but Goblinoid Games should be able to do their own SF take on the rules.

I think I'll keep Cryptworld and the other Pacesetter games, and maybe I should get serious about running them. In fact this exercise in shedding games has led me to ordering Monsters Macabre finally...so now I'm losing ground...

I have been eyeballing my Mutants & Masterminds collection as well. In principle it fits the profile of a game I need to ditch:

1. I have a ton of books for a game I haven't run since it's first edition sometime around 2003
2. I have read probably 5% of those books
3. The system while intriguing clearly demands more time than I have and competes with other games that will provide the same experience with far less effort
4. By the time I am ready to take an interest it will almost certainly be outdated by a 4th edition

MnM 3E fits that profile well, but the books are so gorgeous, and if I only had the time I know I'd love to delve deep into its mysteries. Plus, the DC editions (pre New-52 data however, so YMMV on what that means). Sigh. Into the "out bin."

Then there's GURPS, the game I haven't run something for since 2008 but which remains the one game system I feel would be a reasonable RPG to have on the proverbial desert island. But....I haven't run it in ages. And Steve Jackson Games has more or less migrated the 4th edition of GURPS into an evergreen status with a steady stream of fun PDF releases targeted at the 400 or so GURPS fans left on the internet. They have Munchkin now, and seem to have no further interest in keeping the RPG alive. Should I still care about this system?

Well, I did pick up their three new After the End* PDFs they just released, so I guess my GURPS investment isn't over with yet. And I have narrowed this collection down to  just a fraction of it's original size.....I guess I'll give what I have left a pass.

Call of Cthulhu? 7th Edition still isn't out and I won't order it until it's actually described as a real thing you can order immediately. They could still have a ship sink or a warehouse fire....but what about all my CoC 6th stuff? Some of it I can ditch, having bought it purely out of purile interest....but most of it is gaming stuff I have used, sometimes a lot, and value just for the reading experience alone, never mind its bounty for gaming. Still, once 7th edition is here I might find it a lot easier to ditch much of my 6E product. We'll see. 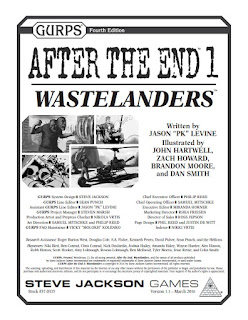 *Check them out by the way. At LONG LAST GURPS has a series of sourcebooks directly supporting Fallout/Boy and His Dog?Mad Max/Gamma World gaming and the three books currently out are awesome.
Posted by Doctor Futurity at 12:00 PM