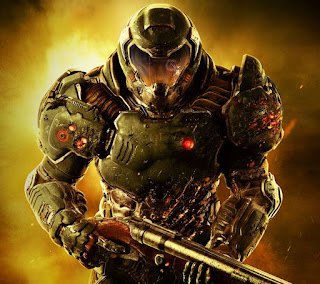 I have Doom on the PS4 (preordered) and may already be wishing I hadn't done so. I'm not a classic FPS shooter fan, although I've tried to engage with the older games as best I could....it's just not a style of play I dig much; without a sense of plot and purpose I find these games hollow experiences. I didn't really play a Quake or Doom I liked until Quake 4 and Doom 3. But, don't get me wrong....I totally understand where fans of the classics are coming from when they complain about the overly elaborate stories of those two titles (we're using the word elaborate very loosely here, admittedly) and the move away from insanely fast run-and-gun multiplayer combat. You know...the sort of combat perpetuated by Team Fortress 2, Unreal Tournament 3 and such, the sort of stuff that invented the idea that rocket jumping is a sensible course of action, and that dual-wielding rocket launchers sounds completely feasible.

Doom, the new reboot/remake/sequel (I can't say for sure which it is, as the game moves back to original 80's style Doom in terms of story depth) is all about creating a modern, graphically pleasant version of that style of game. It will not be for everyone, but if you happen to just want fast and crazy multiplayer and a singal player campaign that makes Painkiller look deep, then this might be your cup of tea.

I bet there are a lot of old Doom fans from the 80s who will get very nostalgic about this new edition (and just as many who will disparage any slight differences, as well). I just happen to be a guy who more or less despised most shooter titles like this until Half Life 2 changed everything and started to set a trend for meaningful (okay, more interesting?) story and game play.

I'll keep chugging along for a while, see if things change. This is definitely not a sequel to Doom 3 in any conventional sense, though....oh well. It is definitely a sequel to Doom 1 and 2 though. First hour of game play gets a B+ for controls and graphics, and a D- for holding interest, but hopefully that will change.....or, I guess I can just be reminded that it's not actually a smart idea to preorder games if I'm not totally sure of what I'll get.

Posted by Doctor Futurity at 1:27 AM

Email ThisBlogThis!Share to TwitterShare to FacebookShare to Pinterest
Labels: doom